A few days ago we had noticed that two little tabby kittens we have at Social Tees shelter were limping a bit. I did extensive sessions of TTouch and Reiki on both kittens, being sure to do any touch very gently until they were able to be evaluated by a vet. I touched them everywhere including their back, legs, tail, and though I noticed some tightness near the base of the tail, neither kitten acted as though any touch hurt her.

Meanwhile, after the first session both kittens began to walk much more easily, standing taller on all their legs and using their back legs more fully than they had before. By the time they were seen by one of our vets, the vet thought they seemed ok. It may be that the stitches had been tight after their spay surgery before they came to out shelter (our animals come to us thru the city shelters where they are spayed or neutered if they are old enough to be). Or that they were just shy, who knows?

The kittens still run from me initially sometimes but once I pick them up, they immediately settle in my lap and are extremely relaxed, as you can see from the pictures of Bobbi below. I do raccoon touches around their head and mouth, ear strokes. connected touches down their back, clouded leopard touches down their legs, little raccoon touches on their paws and between their toes. They are quite relaxed even having their paws touched. Next time I will try clipping their claws, and see if I can keep them relaxed while I am doing that :) 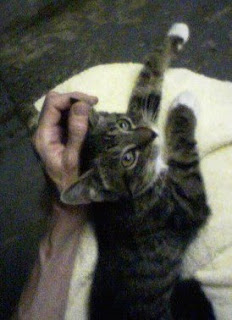 I could really see Bobbi stretching her back out as I did touches down each side of her spine. It was a pleasure to see this!

Once again I have to stress that the modalities I use are not a substitute for veterinary care. But it is lovely to be able to offer them a gentle form of healing that can help them feel better physically and emotionally. 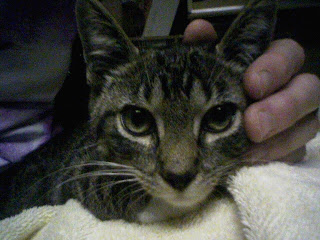 Posted by sarahsuricat at 10:19 AM