The Journey of Sparkle 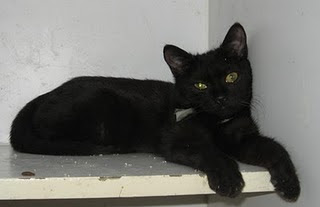 Little Sparkle (pictured above, looking much more comfortable than a few weeks ago when she first arrived) is the most challenging kitty I have come across in a long time. We think that she must be feral -- she seems to have had no previous human contact. She is very afraid to be touched and will generally explosively hiss and swat when approached. Initially, most of the time she would crouch in the back of the litter box. We think she is probably 3-4 months old. I am calling her Sparkle because I wanted to give her a very positive name, and her beautiful green eyes do truly sparkle in the midst of her shiny black fur. When I first began to try to initiate contact with her, I used a long feather. A couple of times, once I started to do some little circles on her head with the feather, she began to settle down and relax her eyes. However, I soon felt that she wanted a longer distance between us, so I tried doing circles and strokes on her head with a paint brush. This would be ok off and on, but still I felt that for my safety and hers (as she was still trying to swat at me with claws out on initial contact), I wanted to use something even longer.

My good TTouch friend Marge Piatak had given me a plastic back-scratcher a while back, and this seemed to be the perfect thing - it is made out of smooth plastic and is very long, and by using the back side of the scratcher (the smooth side, not the scratching side), with very gentle touch, this seemed to be the most comfortable surface I had tried yet for Sparkle. Thanks so much Marge! I tried wrapping an ace bandage around the end of this to see if a more textured surface feels better, but it seemed that the texture irritated her, so I went back to just using the scratcher.

Meanwhile, a very sweet couple is very interested in adopting Sparkle, though they know she will take a while to be used to human contact. They have been coming by the shelter, and I show them what I am doing with her to try to get her used to me. They have already adopted a gentle, big Russian blue boy cat, who could be a very calming influence on Sparkle. For a couple of days, we had a very socialized little kitten in the shelter, and we put him in with Sparkle with some trepidation. I watched them closely to make sure that nothing dangerous was happening. The friendly kitten soon learned he had to keep his distance at least for a while, and later on I saw both of them squished next to each other in the litter box. The friendly kitten was soon adopted, so I waited until there was a good candidate for a new friend for her. About a week or so later, we put Sparkle in with a young adult male (about a year old) who we call Wally. Wally is the sweetest, most gentle kitty and he welcomed Sparkle by touching noses with her (she didn't hiss at him, either), and though she was probably a bit skeptical at first, they were comfortable with each other in no time, sharing food, and sitting next to each other. She still hisses when we try to touch her, so I am still using the back scratcher to do TTouch circles and strokes on her, primarily on her head -- and she particularly likes to be touched on her forehead, top of the head and stroked on the ears. 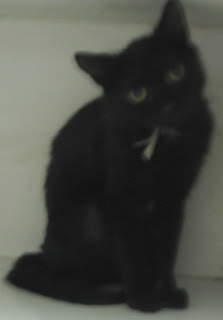 By the end of another day, they started to snuggle on the shelf together sometimes. In general, she seems so much more comfortable than she was in a cage by herself. Today I noticed that after she was hissing because she was afraid when the cage was opened, Wally began to groom her, licking her head, trying to calm her. Very sweet! 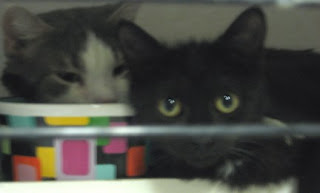 Above you see her looking skeptical still of humans, but perfectly comfortable next to Wally.

The woman who wants to adopt her came in a couple of days ago, just as I was thinking about her and wanting to give her a call to give her an update. I showed her how to do circles and strokes on Sparkle with the back scratcher, and encouraged her to try. I did TTouch on Wally in the meantime to keep him busy. Sparkle hissed at first, but quickly calmed down as the woman touched her with the scratcher. I had not told her that TTouch circles generally go clockwise, so she was intuitively doing counterclockwise circles, but they were working, so I just let her keep going. She said that the big grey cat they had adopted was now very comfortable in their home. He is a very friendly guy, so I feel pretty certain he would be welcoming to Sparkle. The woman wanted to talk the situation over with her boyfriend, and we'll see what happens next. I wouldn't be surprised if they come to pick up this little girl very soon. If and when they do, I will give them some more tips that hopefully will make help her acclimation to their new home to go at least relatively smoothly. I wish them all the best and have to thank Wally so much for his help. I also would like to give my friend, animal communicator Eileen Garfinkel, for her help in communicating with Sparkle, as well as the others at the shelter who have been very understanding and respectful of her. Below you see her taking a nap with her new pal Wally. 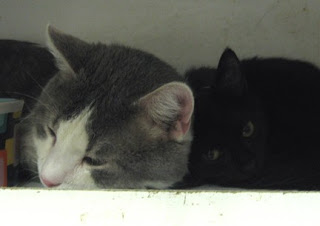 Posted by sarahsuricat at 8:48 AM