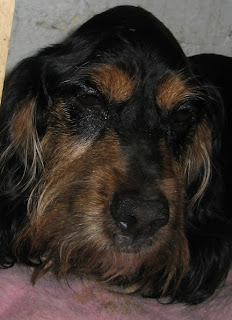 Yesterday three new dogs came into Social Tees shelter. They were three of maybe 25 dogs that came from a hoarder. All three are some combination of dachshund/terrier and who knows what else, all are approx. 4 years old. All three dogs were shaking when they first come in, though two of the three were still eager to make friends. This fellow above, named Paddington, was the most scared of all, and retreated to a dog bed under the desk, where he felt safe. I sat on the floor a ways from him and little by little came nearer to see if he was ok with that, which he was. I positioned my body so it was sideways to him. I first stroked him with the back of my hand, and gradually did some llama touches and then some abalone touches on his body. I could feel that his body was shaking. While I did this, one of his pals, Scooter (the short-haired dog pictured below) came and sat near me, so I did abalone touches on both of them at the same time. Scooter was also shaking a bit at first but soon he came up to me and gave me a big kiss. Paddington remained under the desk, but grew more at ease, as I felt his shaking subside. After a bit I gave him a break, as I didn't want to overwhelm him.

Meanwhile, the other two dogs could not get enough attention. Both would come up to me and to others in the shelter and put a paw on your knee to let you know they would love to be touched. Below is Theo, who has a charming, fluffy little face. I found that he especially responded to hair slides, which I did on his long fur. 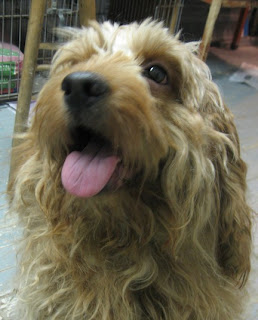 Below is Scooter, who immediately formed a strong heart connection with me. I started out by doing ear slides on him, and felt the shaking in his body begin to subside as I did this, followed by abalone touches down his body. He really craved contact and began to nestle himself in my arms. 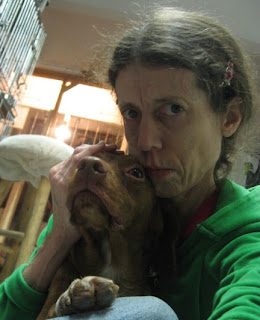 Can you tell I want to take this dog home with me? His soulful eyes go straight to your heart, and you can tell he would be your loyal companion forever. All three of these dogs have so much love to give, I'm sure they will be going to forever homes soon. 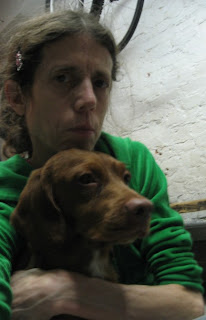 Posted by sarahsuricat at 9:08 AM