TTouch and Reiki at BARC Shelter: Little JB: The Power of Quiet Patience and Persistence 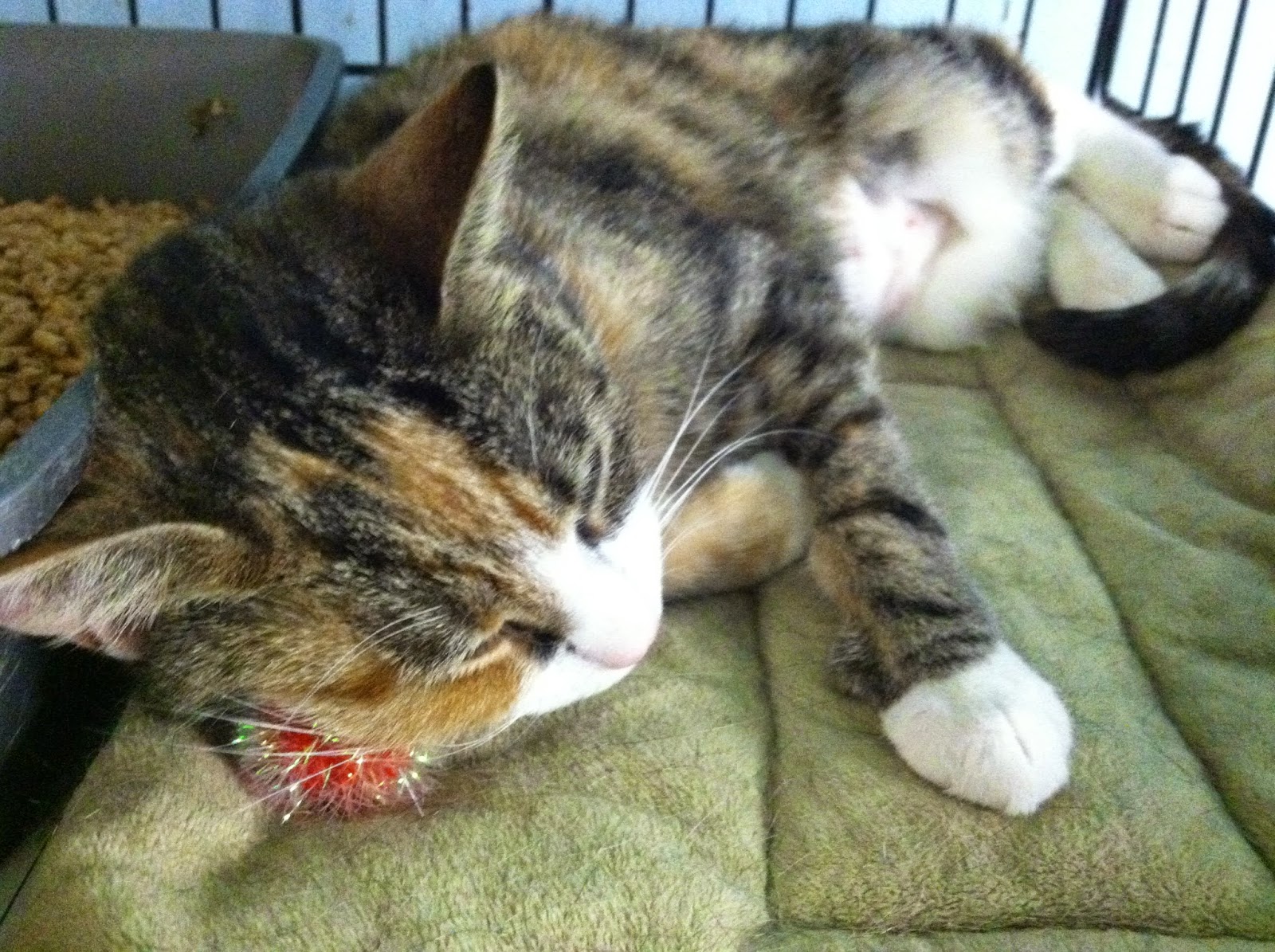 Little JB is a gorgeous little calico cat who has been at BARC Shelter for some months now.  The JB stands for Josephine Baker -- she looks like a smaller version of one of the cats who the shelter people own who is named Josephine Baker.

Sometimes I come across a cat who is not so responsive to either the tools with contact with the hand, and that can be a bit of a challenge, but the lesson I learn over and over is to continue to try different approaches, different tools, using the TTouches or tools in a different way, etc. until something starts to click.  It can take patience and persistence, but it is so worth it.  There is always some way to connect with an animal, whether it is in a huge dramatic way or a very subtle way that grows over time.

She has been a challenging kitty to get to know.  The shelter environment is particularly stressful for her and she gets overstimulated easily and will let you know when she is not in the mood for contact with a swat.  She can get engaged in playing with a toy but when it comes to being touched, that is hard for her.

First I tried working with her with a paintbrush, or with a feather, as hands seem to scare her, and usually her response was to swat at them.  Sometimes, if she was in a more sleepy mood, I would be able to do TTouches on her head area with a paintbrush, but that was not so often.  Sometimes I would make the TTouch circles in front of her with the paintbrush, and sometimes she found that to be relaxing. Below is a demo of that.

I started just opening her cage and staying quiet and still, and sometimes she would come to the front and rub a little bit against my hand.  I would just let her do the rubbing instead of trying to reach to her.  Sometimes I would talk quietly to her.  The BARC staff and volunteers also do whatever they can to help her be at ease.

Recently, she was moved to a lower cage and that seemed to make her much more comfortable than she was previously.  She was in a cage next to a very gentle, quiet kitty named Katie Bell, and the two became good friends.  I think both these things were really helpful to her.

There was something about the clicker training that helped to energize her, and it was something more than the treats, as she was not always that interested in the treats.  She seemed to be coming forward for a connection of some kind.  I felt like I was getting closer to her, even though I was not touching her.  I would often just sit outside her cage, sending her Reiki, or even just sitting there quietly.

Recently, a new volunteer opened her cage and she actually came out on their lap for a bit.  She didn't want to be touched, just wanted to sit there.  A couple of days later, she came out on my lap briefly - didn't settle there but I had a feeling that she was thinking about it:)

She also started feeling very comfortable with me doing TTouch circles on her head with the stick part of a stick toy.  This was a new level of comfort for her as well.

Last week a larger cage on the upper level came available so Little JB was moved there.  Even though she is back on the top level where she previously was not so comfortable, the location is different and the space is twice as big as before, so she seems even more comfortable than in the cage on the lower level. 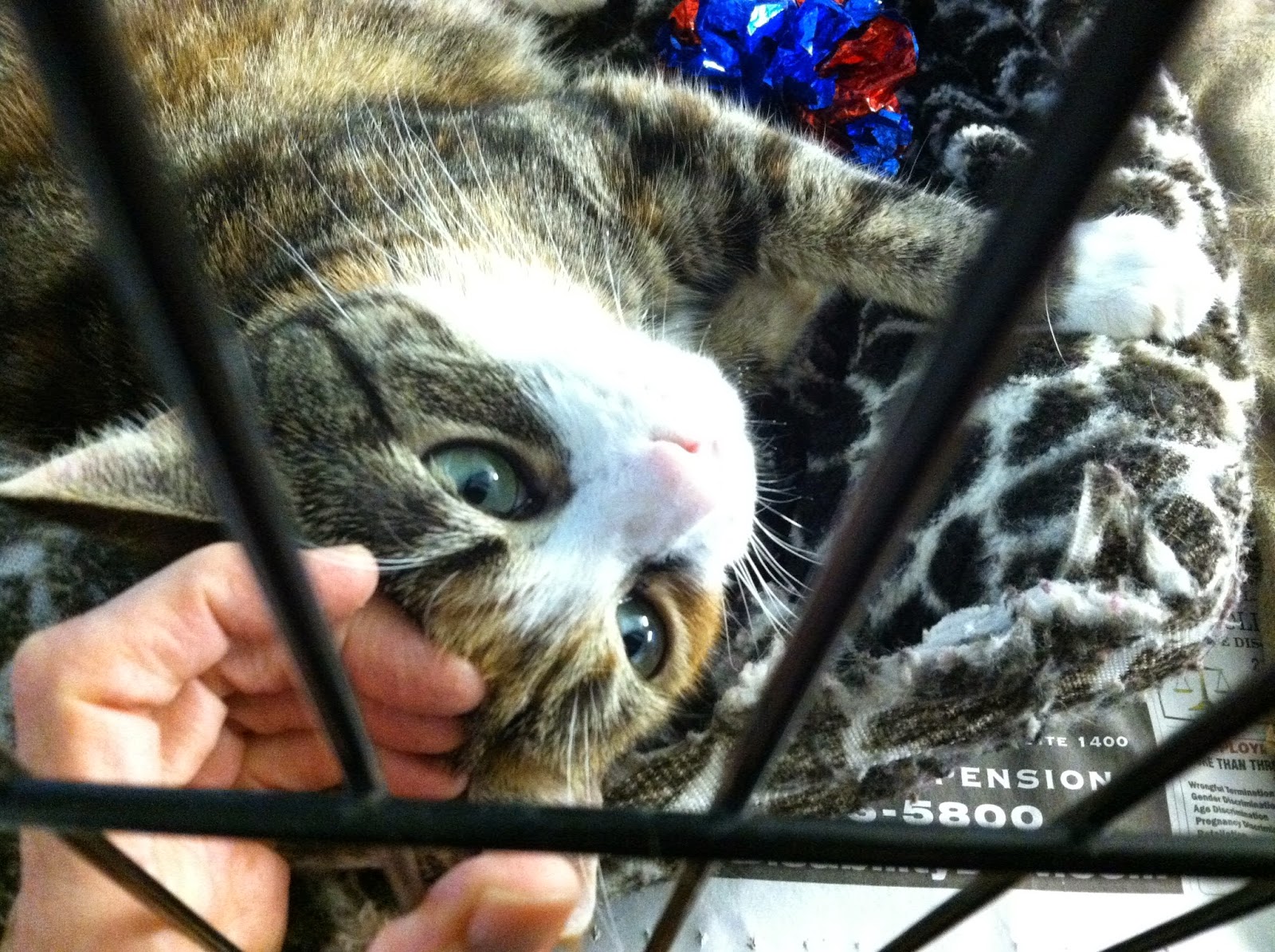 Yesterday was a real breakthrough for little JB.  Diana, one of the wonderful keepers of the cats (Colin is the full time cat guy and Diana is two days a week) said that she had noticed that JB was comfortable being touched through the bars of the cage, though not if you opened the cage and tried to touch her. 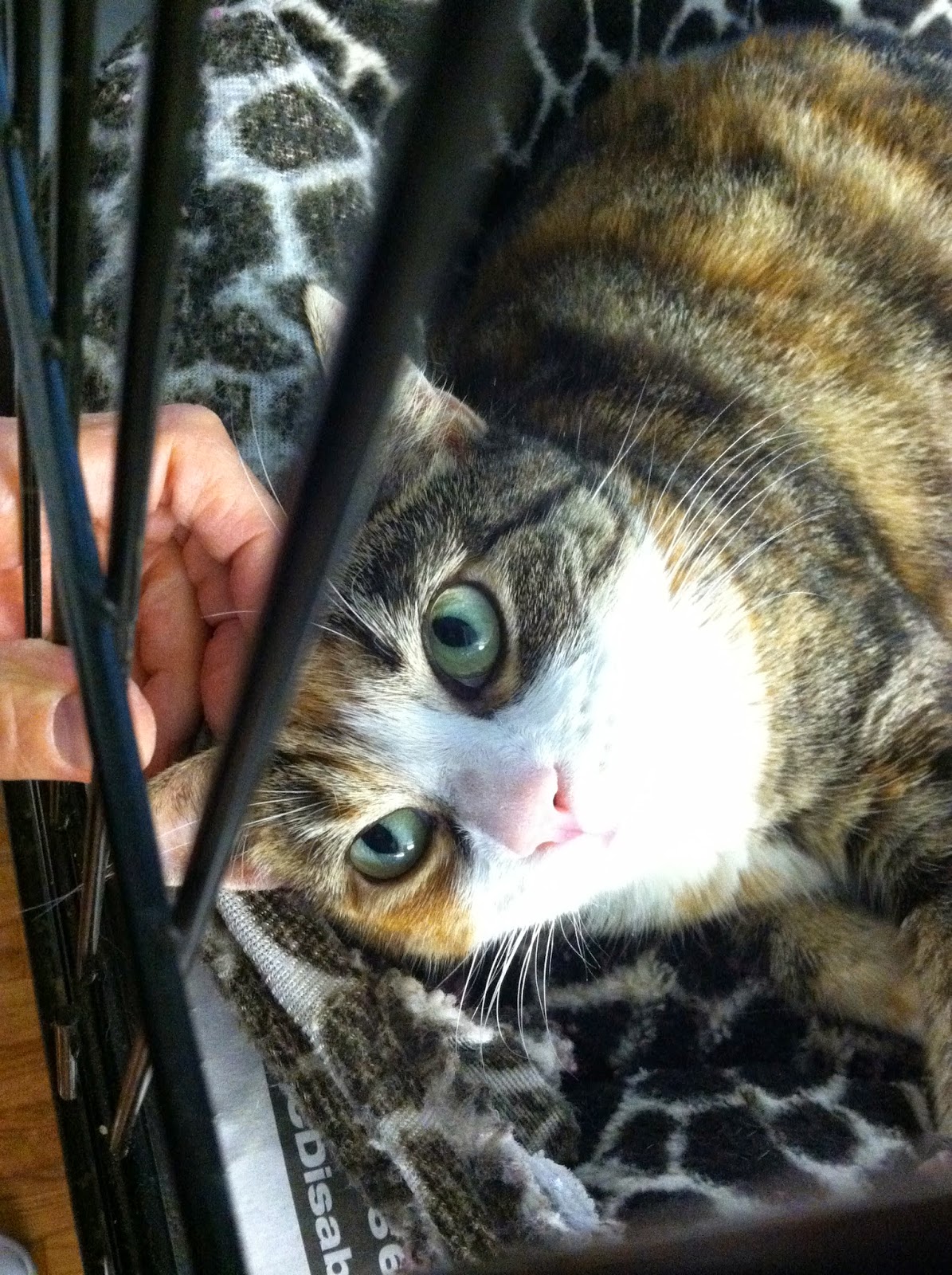 Little JB was resting in her bed which was close to the bars of the cage, so I began to do some very gentle strokes and TTouches on her head.  She pushed into my hand and made the cozy smile that cats can make when they really are enjoying something.  I continued for quite a while, as she kept gently pushing into my hand and rubbing into it.  This was the first time I had seen her truly enjoy contact for an extended period of time.  And I felt like I was getting a glimpse into the real personality which I had always felt that was there beneath her sometimes bristly exterior.  That sweetness, that longing for connection.

This lovely moment is the type of moment I really live for - when you feel you connect with the heart of another creature, when they trust you enough to make this connection.