My Journey with Luther and Mr. Maps: Relaxation, Recovery and Focus with TTouch, Reiki and Clicker Training 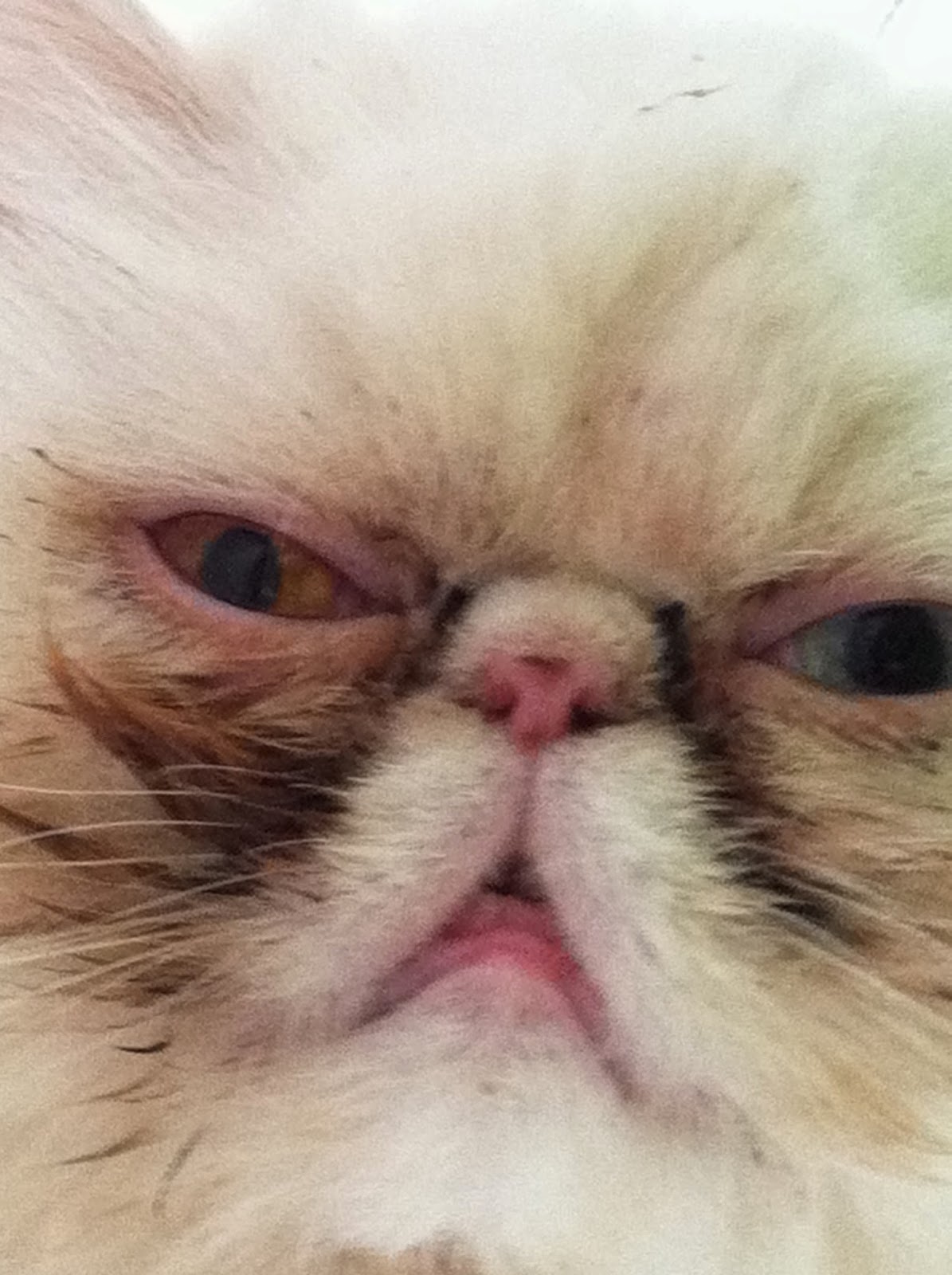 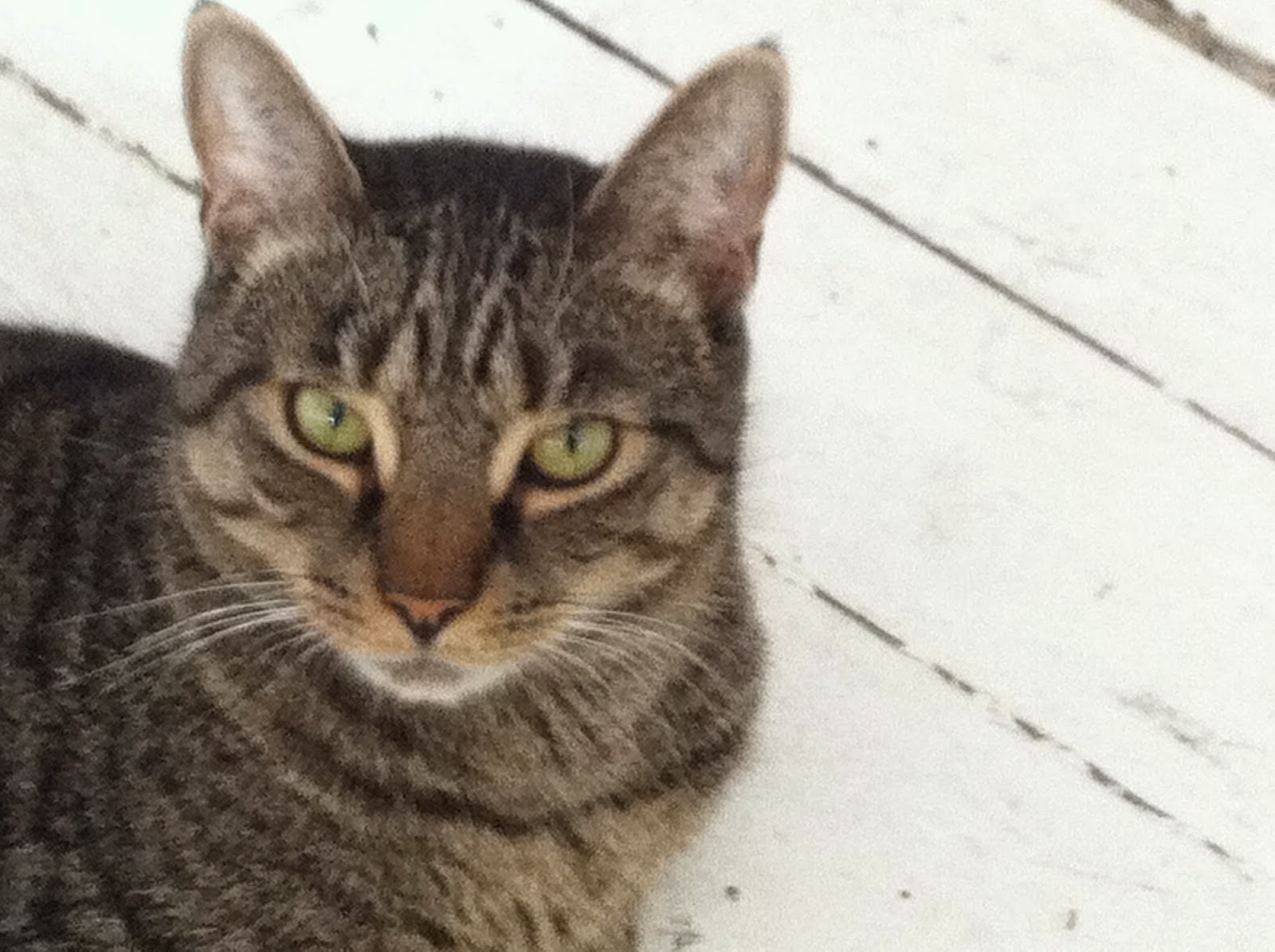 Some months ago, I began doing Reiki sessions with a dear black Persian cat named Bunny, who had kidney disease. You can read more about him in a past post, http://sarahsuricat.blogspot.com/2014/06/the-power-of-patience-and-quiet.html.  His people, Suzanne and Mike, did everything they could to help him but sadly, this quiet, sweet and powerfully spiritual creature passed away the end of June. 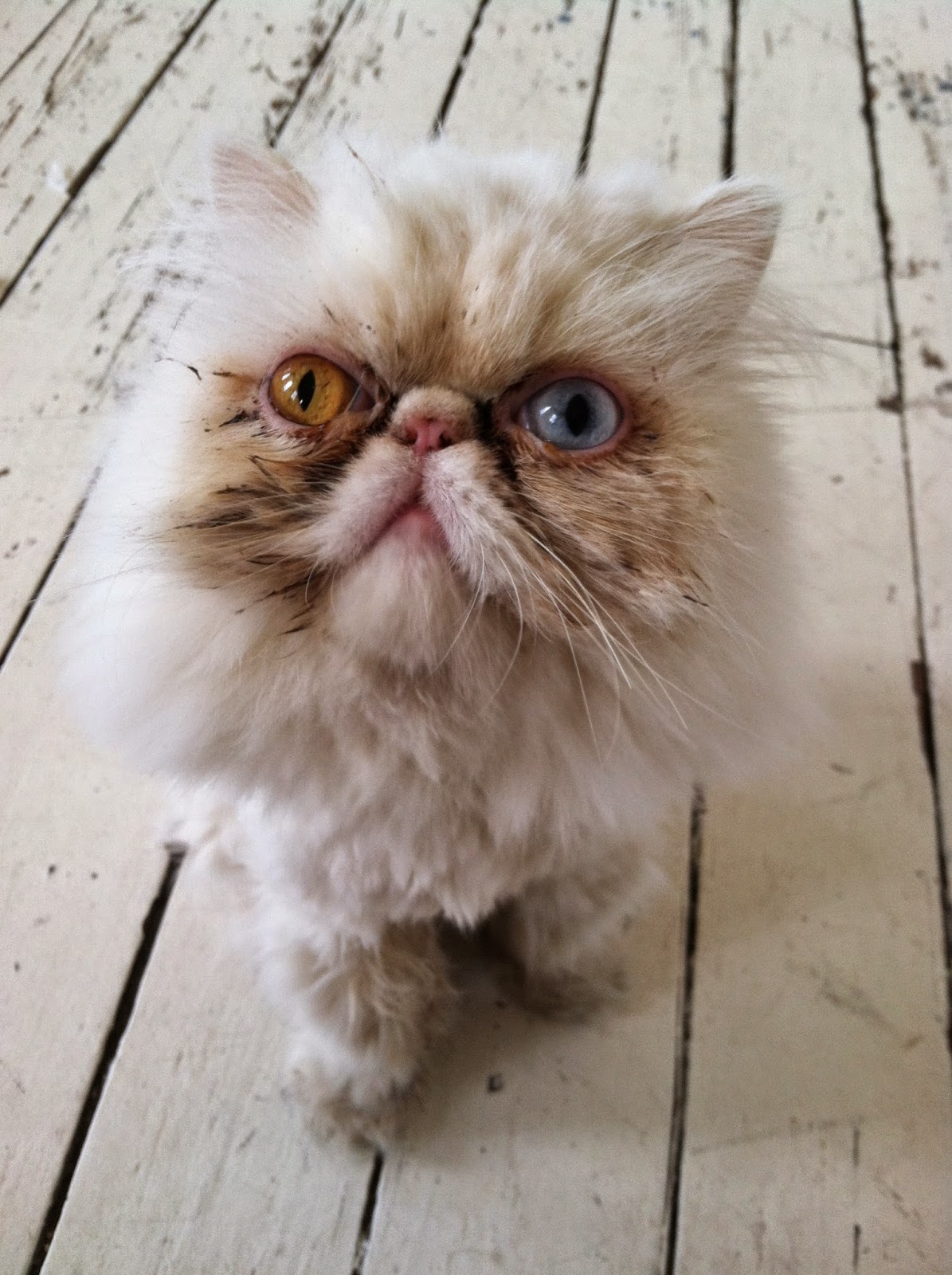 Mr. Maps
Bunny had two adopted brothers, Luther and Mr. Maps.  Luther is a handsome young tabby and Mr. Maps is a delightful white Persian cat with two different colored eyes. Mr. Maps seemed to take Bunny's death especially hard, so I made both cats Bach Flower remedies following Bunny's passing.  It was a loss, an adjustment and a shift in dynamics in the household, but both cats are now doing quite well, and most likely have become closer to each other.

Luther had been adopted when he was still recuperating from a broken leg, so he was on cage rest for a while.  When he was able to emerge from the cage, the people soon were able to see more of his behavior.  He is very energetic, being a young cat, but is so sensitive that he can become overstimulated extremely easily.  And when he becomes overstimulated, he sometimes will exhibit that with scratching, pouncing on you, etc.   It was often difficult to handle or pet Luther without him becoming overstimulated and reactive.

I began working with Luther after I had been working with Bunny for a bit, as Suzanne and Mike wanted me to do what I could to help Luther calm down.

Initially, I worked with Luther using long TTouch wands, so I could give Luther plenty of space.  I felt he needed the space as he was so sensitive to any kind of direct contact with people, even though I sensed he really was a very loving being, and that he longed for contact.  This worked very well at first, and doing the TTouches with him this way got him accustomed to being touched in a gentle way, yet not having someone too close to him.

After a while, he wanted to use the wands as toys, so I decided to shift to a different approach.  I did some TTouches on him using paintbrushes, but also began doing Reiki with him.  Reiki energy helps to calm on a very deep level, and my hope was to release some of the trauma that he may have been holding from having the broken leg and whatever else he may have gone through before he was rescued. 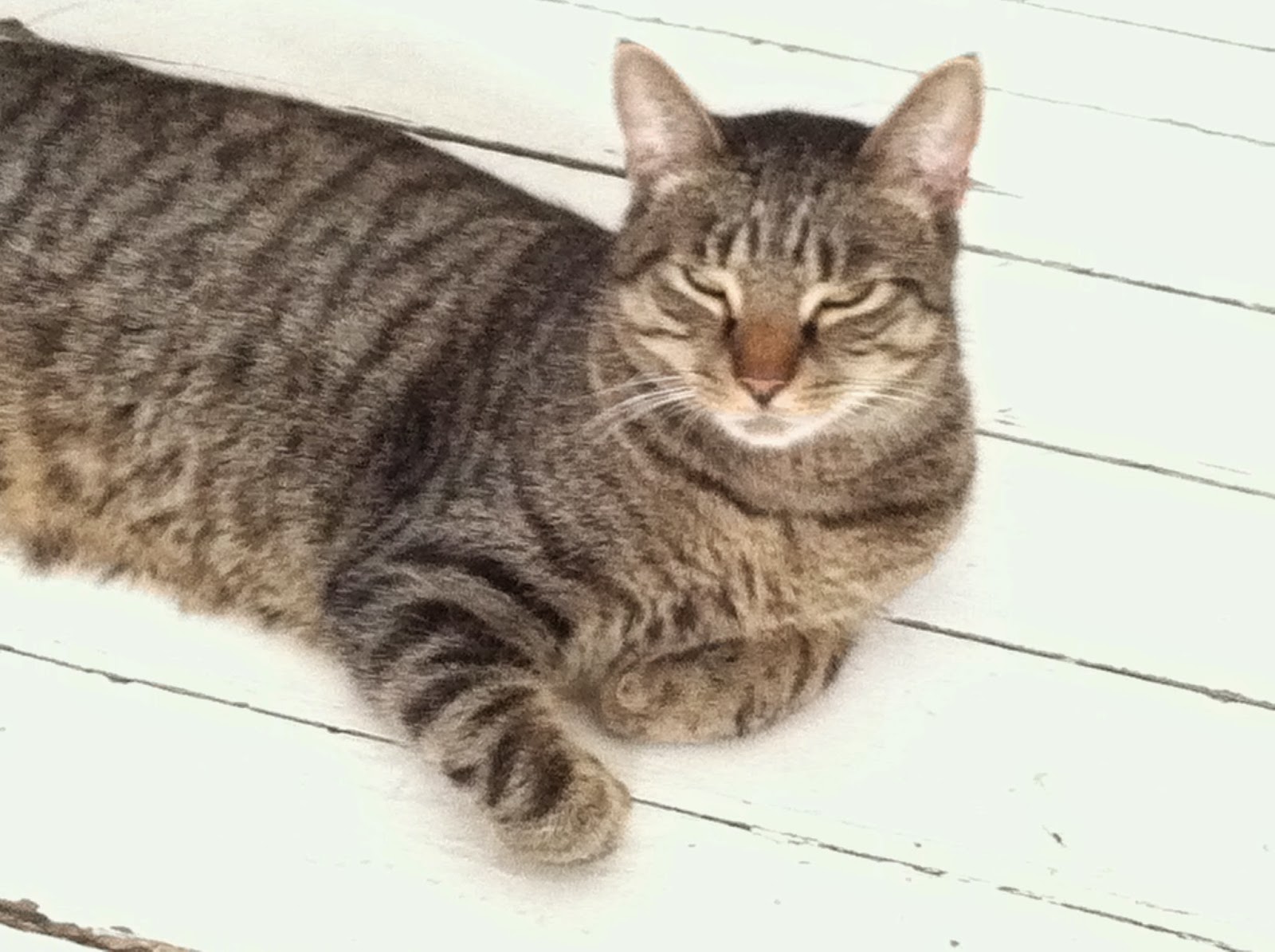 Luther, being so sensitive, is very receptive to Reiki, and usually settles into it right away, stretching out and closing his eyes, taking it in.  After he settles for a while, he often will come up to me and sniff me and start brushing his body against me.  I stay very still when this happens, as I do not want to risk him becoming startled or possibly reactive if I move.  What he generally does after this is to go a few feet away from me and settle down again.  It is really beautiful to see him become so truly peaceful, to sense a very tangible shift in his whole energy. 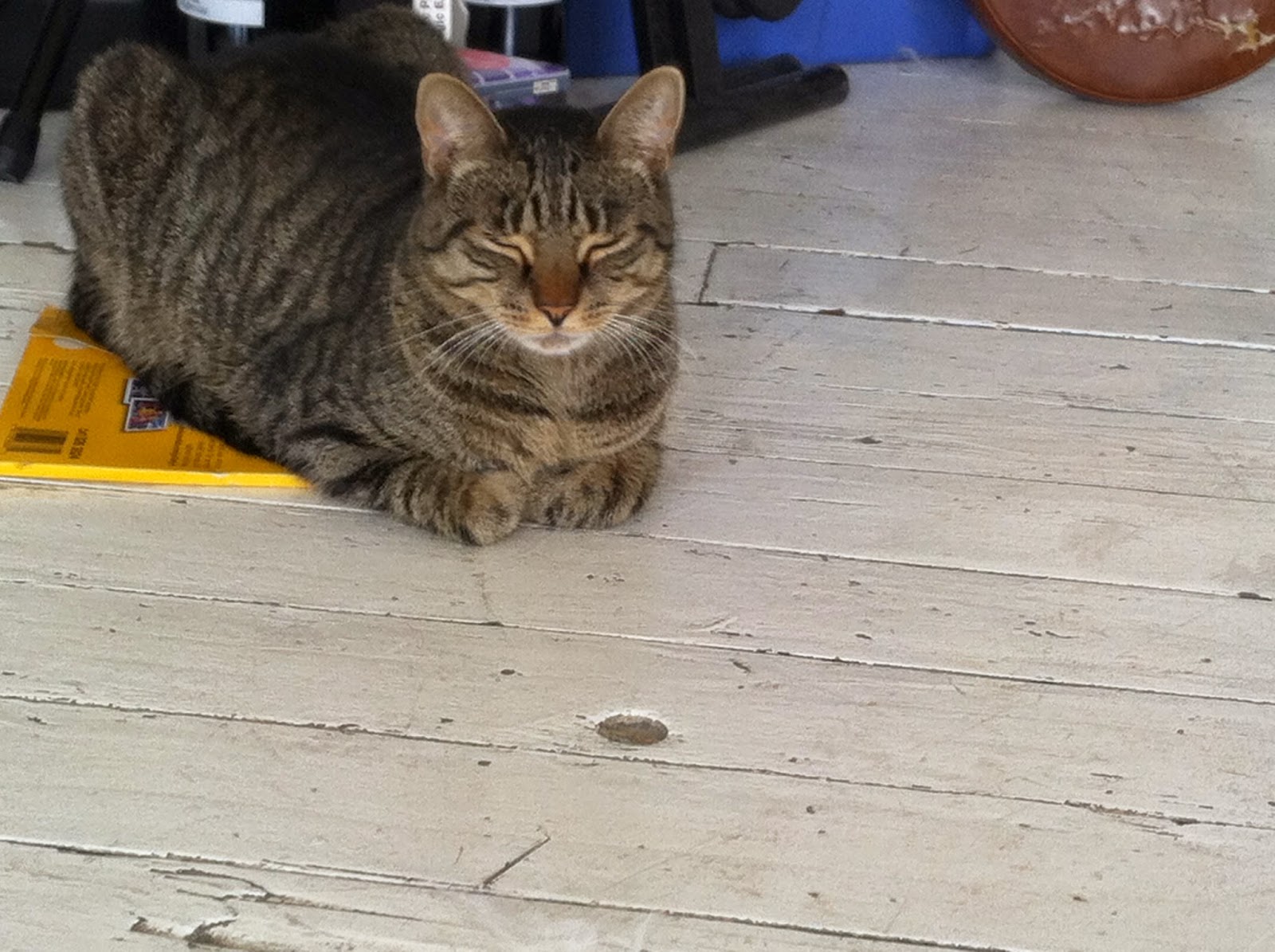 Luther, relaxing into Reiki
Over the past couple of months, I have started to feel a very tangible shift in Luther's presence.  He is still a lively and playful cat, but he seems to have more openness and ability to shift into a more mellow space, which is great.  And if he does get overexcited and jumps at you or hits you with his paw, it is much more gentle and the claws are usually in.

And as he has gotten more used to me and to the energy, I think we both have become more comfortable around each other, and I know that over time he will start to receive the energy on an even deeper level. 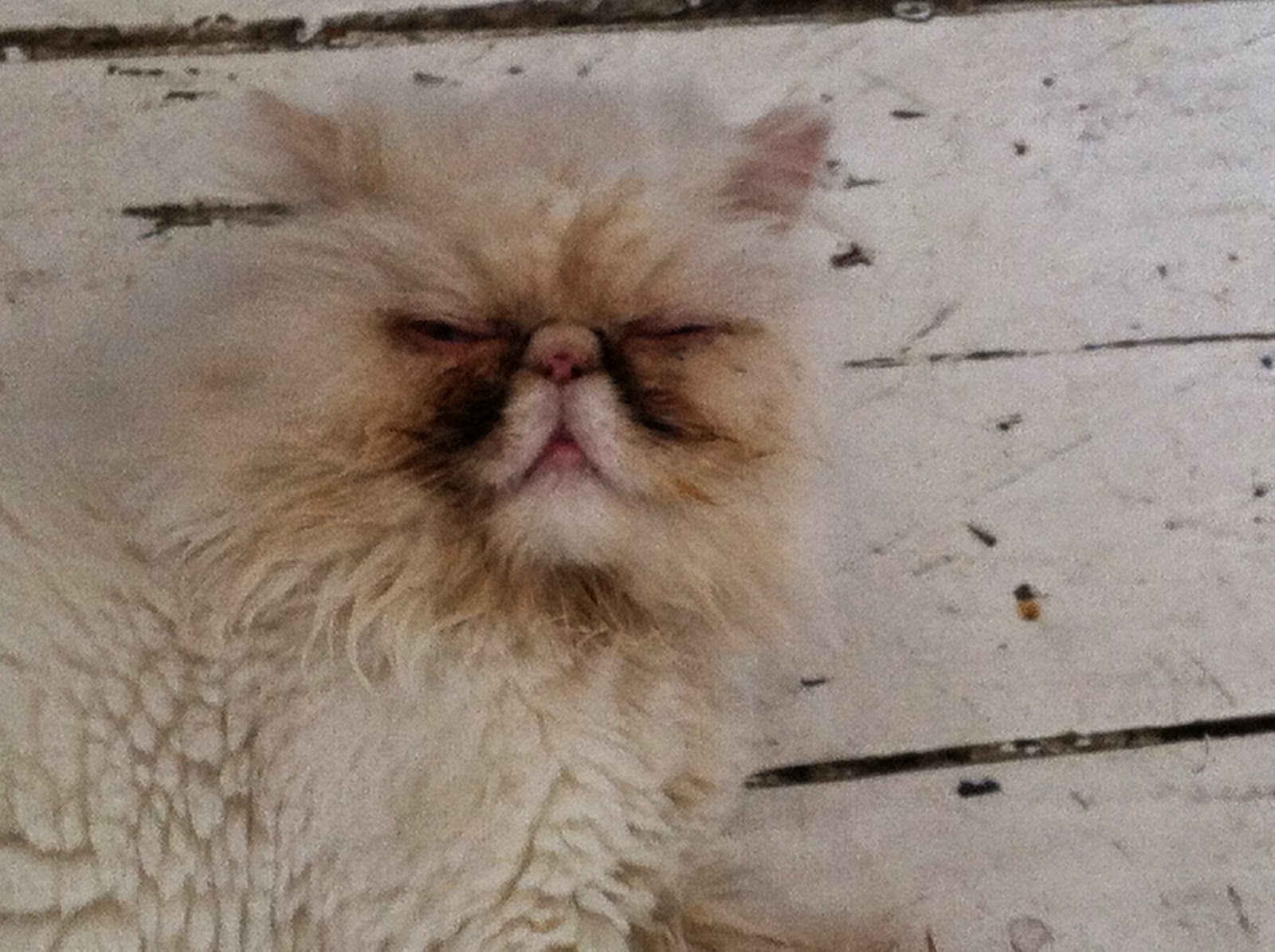 Mr Maps, relaxing into Reiki
I began doing Reiki with Mr. Maps after Bunny passed away, as Mr. Maps seemed particularly distraught.  Mr. Maps is super-affectionate, so I started out by doing some TTouches with him, and then began sending the Reiki energy to him.  He has been more and more receptive to it each time I have worked with him, and now he completely stretches out on his back or on his stomach with his back legs stretched out behind, with his eyes closed and a blissful look on his face. 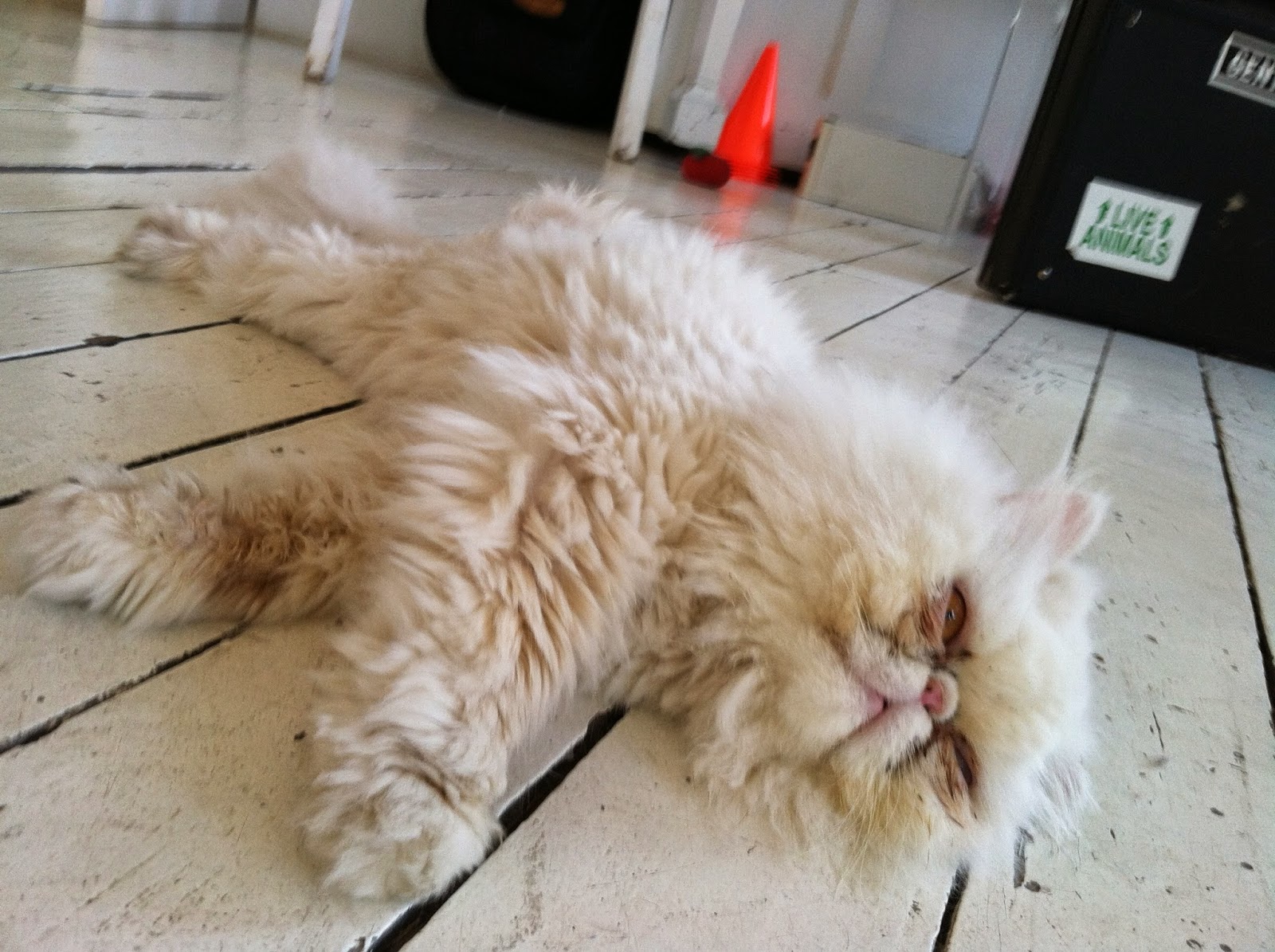 I have recently added some clicker training into the sessions, particularly for Luther's benefit, as I think it helps him to feel a more focused energy.  Mr. Maps seems to enjoy it as well, but he is not really interested in the treats, so for him, I click and then reward him by a little stroking around his chin and chest area.  I have wooden dowels which I set up in various configurations, sometimes in a path, sometimes in more of a labyrinth.  But even just going through the dowels set up in the path seems very effective, so I often just stick with that.  Cats can have a pretty short attention span for  clicker training, so I observe them closely to see when they are done with it.

Mike and Suzanne were away recently, so I came by to do Reiki with the cats while they were away.  I had been doing sessions with them separately, but it felt right to have both boys in the room with me and just start to let the energy flow to both of them.  Then at different parts of the session, I would focus on one cat, and then the other.  Both kitties completely stretched out as if they were sunbathing, really letting go.  So beautiful to feel this connection, to feel such peacefulness and joy with both of these cats, with the sun coming in through the windows and a slight breeze - that late summer, balmy temperature. 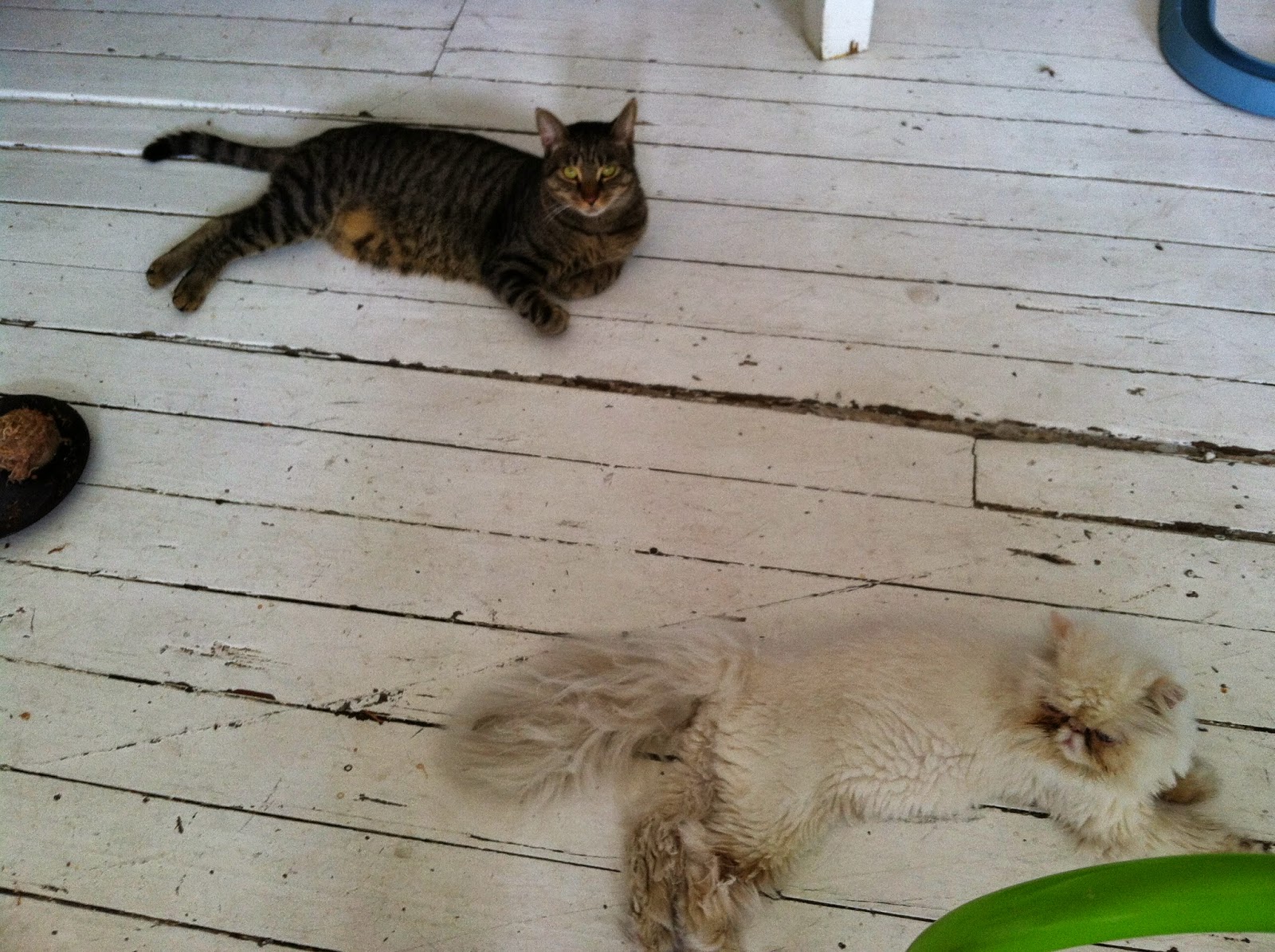 After a recent appointment, Mike picked Luther up and gave him a good hug and kiss, which was so sweet to see.  Mike said that a few months ago, that would not have been possible at all, and he remarked at how he also had noticed Luther's behavior shifting.  Not only that, but he mentioned that the house call vet who they use had been there recently and she immediately remarked on the change.  This is the kind of feedback that truly makes my day :)

I look forward to a continuing and interesting journey with both of these dear beings.xxoo
Posted by sarahsuricat at 9:49 AM