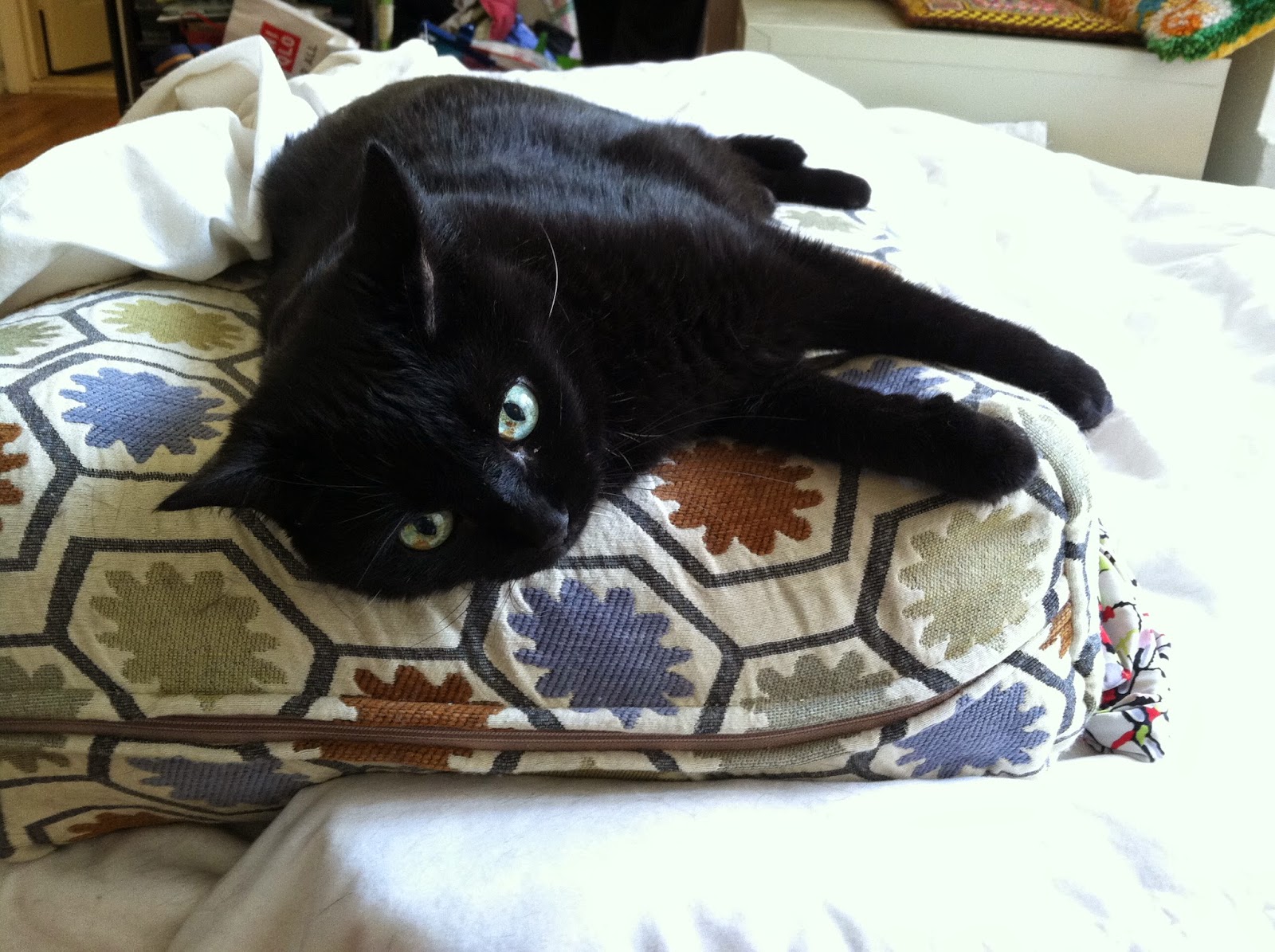 I was called to work with Eliza because she is beginning to show imbalance in her kidney function.

Reiki can help the body to remain in optimum balance, can help to stimulate the appetite, and can promote a general sense of well-being.  So it is affecting the body both physically and emotionally.  TTouch can also help in a similar way, though it is a different approach.  With a kidney imbalance, I most often primarily focus on Reiki, but I usually bring some TTouch into the session as well.

Eliza is a beautiful black cat with lovely green eyes.  She is very sweet, and she and her person Randie have an amazing bond - they are so connected with each other. 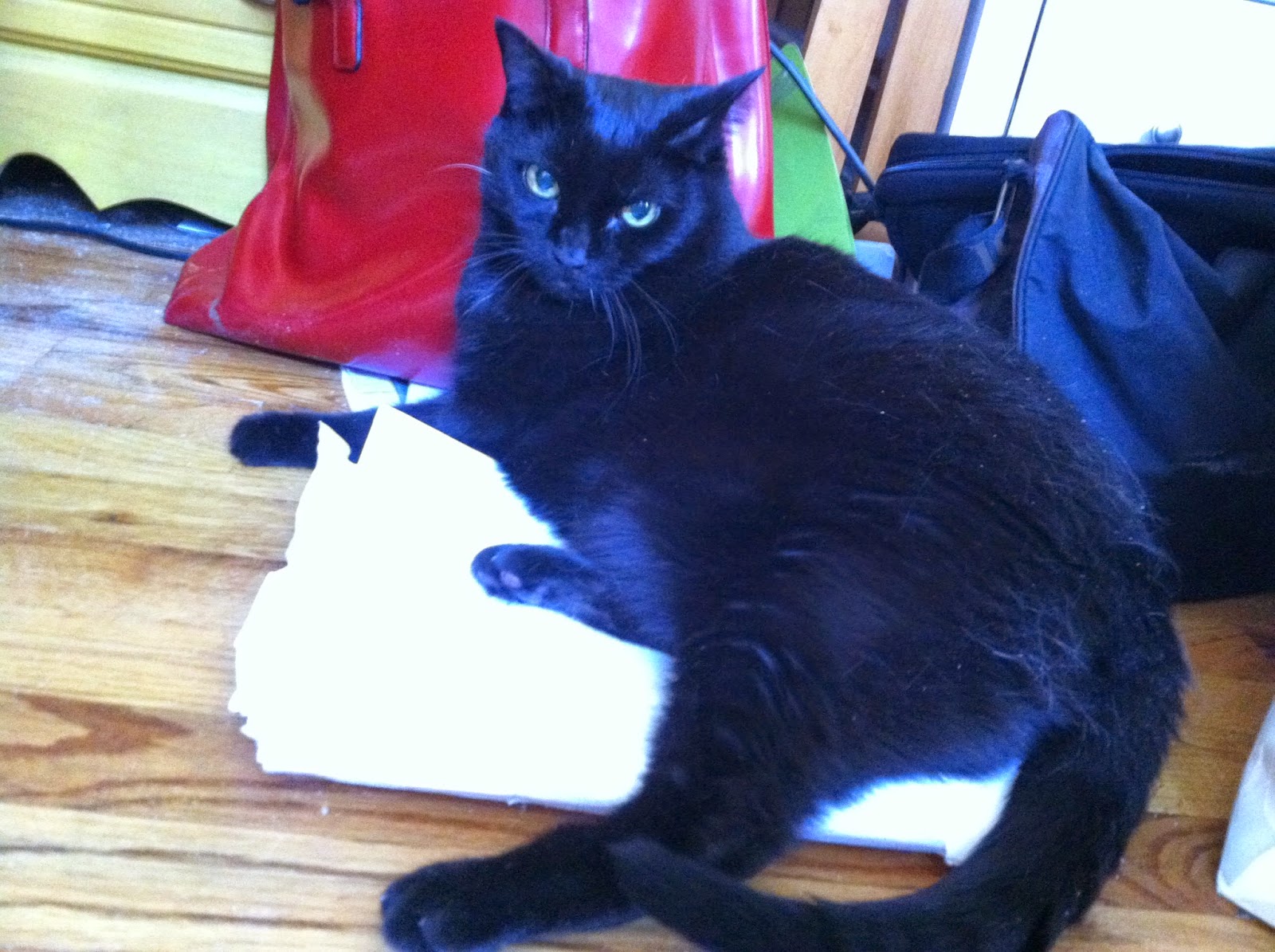 Eliza is wary of strangers -- Randie said she has some feralness in her -- so I wanted to approach her particularly gently and gradually.  At the first appointment, she was in the closet.  This was actually completely fine for our session.  Reiki does not have to be hands-on to be effective, and particularly for cats it is often best to do it at least a bit hands-off, especially at first, unless the cat guides you to putting your hands on.  Cats are extremely sensitive beings, and the energy can be too intense for them if you have your hands too close.

I sat outside of the closet, offering Reiki to her, telling her silently that she need only take as much or as little as she wanted.  At first her eyes were very big and scared, but they started to relax as I continued with the session.

Each session, Eliza has become a little more comfortable with me.  At first she was remaining in the closet or under the bed for the session, but little by little she began coming out from the hiding place.  Sometimes it was just to go get some food or water from the kitchen, but then she started to be comfortable staying out for at least part of the session.  Randie is usually at her desk, so Eliza will often go to sit down near her chair and get a few pets from Eliza.  This is a safe place for her, so I decided to see if I might touch her as well, or at least move a little closer and have her sniff my hand etc.  Initially I just sat near her, still sending Reiki from a short distance away, but once she became more comfortable I had her sniff the back of my hand and just did a stroke or two with the back of my hand.  Initially she was a bit scared of this, but one day she actually started leaning into my hand a bit, so I was able to do some TTouches using the back of my hand (this is a more gentle feeling than using the front surface of the hand).  I have found that slow zigzag TTouches, which help to connect the body, are helpful for her (she has some arthritis as well).  I have found that llama TTouches, which use the back of the hand, are also comforting for her.  After becoming comfortable with the llama TTouch, now she is comfortable with the lying llama and abalone TTouches (which use the front of the hand).  I do these TTouches using the "snail's tail" at the end, which give an extra release. You do the regular clockwise circle and a quarter of a regular TTouch, pause, and then release counterclockwise for a quarter of a circle. Below are two demos. For the Lying Llama TTouch, I am actually seeing that my fingers look a bit stiff here.  Remember to keep your fingers feeling soft and flexible, even if they are not moving a lot.  For more, please have a look at my youtube channel, http://youtube.com/sarahsuricat.


Eliza also enjoys contact around the sides of her face and under the chin, so I often will offer my hand and let her rub into it as much as she is comfortable doing.  It is so important for the cat to feel that you are not forcing anything on them.

I generally will do TTouch with her for a short while, as I don't want to overwhelm her.  Then I resume the Reiki session, sitting near her and offering the Reiki with my palms upturned, rather than placing on the body. 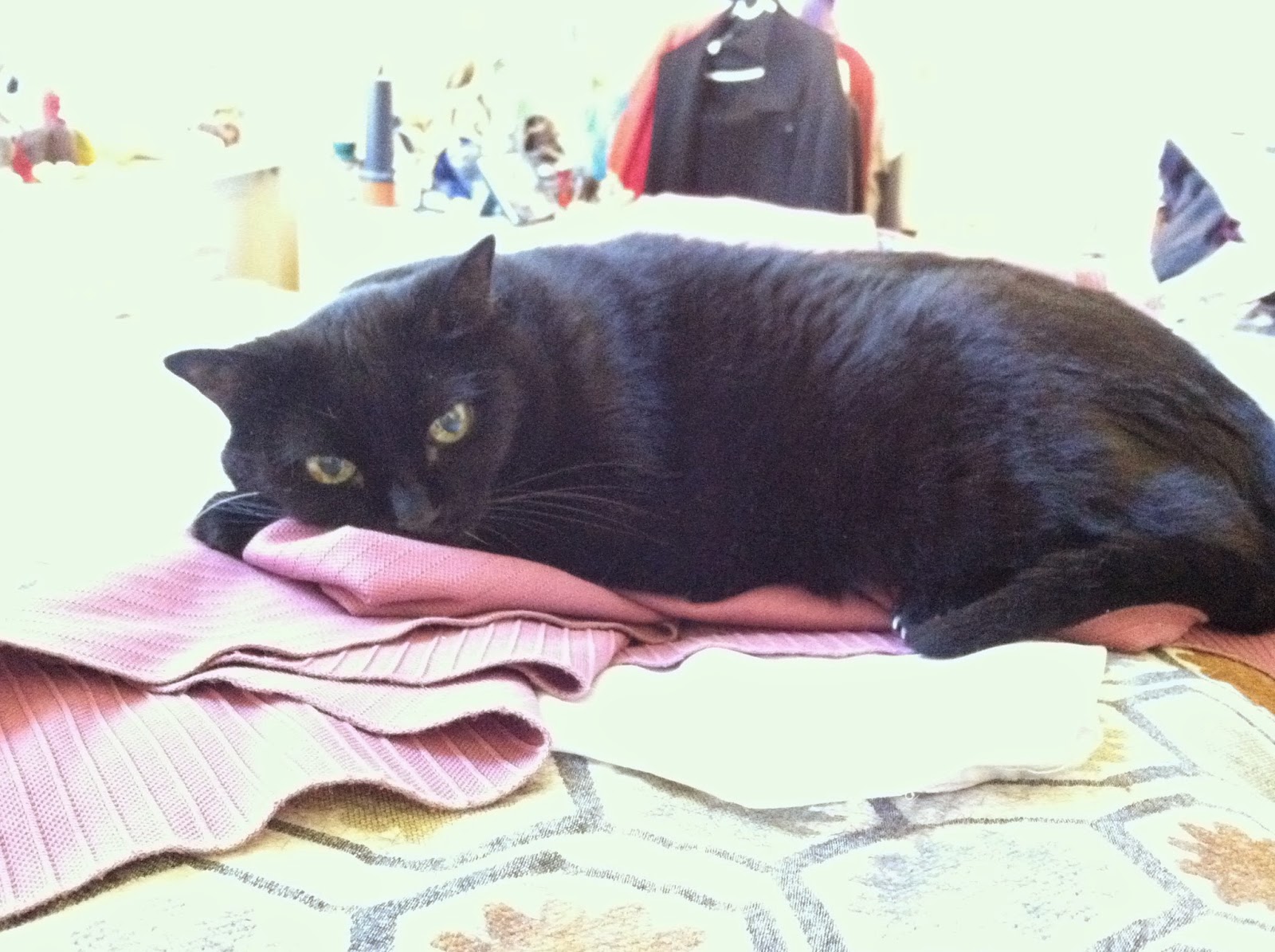 That is, until the session two weeks ago...

It was getting near the end of our session, and Eliza had settled in several different places during the course of the session, which is quite normal.  She was laying on a table and I was sitting nearby.  I had been doing some TTouches with her, and at one point I just held one of my hands very still, offering Reiki (actually, I think the Reiki is flowing the whole time through my fingers, just more consciously so when my hands are still).  I felt her settling into the warmth of the energy, and felt the energy being absorbed by her.  I decided to stay with my hand there for a while.  We remained very still and she continued to settle into the energy.  My hand felt as though it was glued there, feeling her absorbing the energy on a deeper and deeper level.

After we finished, I thanked her, as I always do, but this time, it felt like an even greater honor than usual, as though we had gone to another level with trust with each other.

I saw Eliza this past weekend, and when I came in, she was out on the bed, and very cozy there.  I very quietly sat down near her.  I had recently completed Level I of Healing Touch for Animals, a form of energy work with a more clinical approach to it.  I was eager to give it a try with Eliza.

Shortly after I sat down on the bed with Eliza, she moved so she was actually closer to me, right next to me.  I began to do some TTouch to initiate contact, and with some zigzag TTouches discovered that Eliza was emitting a lot of heat from her lower back, which makes sense, as she has some arthritis in the base of her tail, as well as having the kidney issues (corresponding chakra is in this area).  It was clear that area was too sensitive at this time to be directly touched.  I began the HTA Chakra Balancing process, though I did it with my hands off, so she would feel comfortable.  She completely relaxed into it.  It was lovely to be sitting right beside her for this whole process, and that she had wanted to be closer to me from the beginning of the appointment.  Each time I moved my hands towards a different area, she relaxed more into it.  When I began working near the front legs, she stretched them out.  And at the moments when I was working on the two shoulders and later the two hips, I really felt her absorbing the energy.  So hopefully this will help her be a bit more comfortable walking.  Randie had said she had noticed her walking a bit more gingerly lately.

When I was done with the Chakra Balancing, she went to get a treat from Randie, and then briefly settled again, laying on her side for a bit of Reiki, just having a peaceful connection with her for the last moments of the session.

As an animal gets to know and trust me, I feel them absorbing the energy on a deeper and deeper level, and they often are more comfortable with closer or more direct contact, which is so sweet to feel.

Thank you Eliza!  It is a pleasure working with you and feeling a closer connection every time.  I look forward to our next session!  xxoo
Posted by sarahsuricat at 3:57 PM