TTouch and Reiki at Bideawee: Ashanti - The Power of Patience 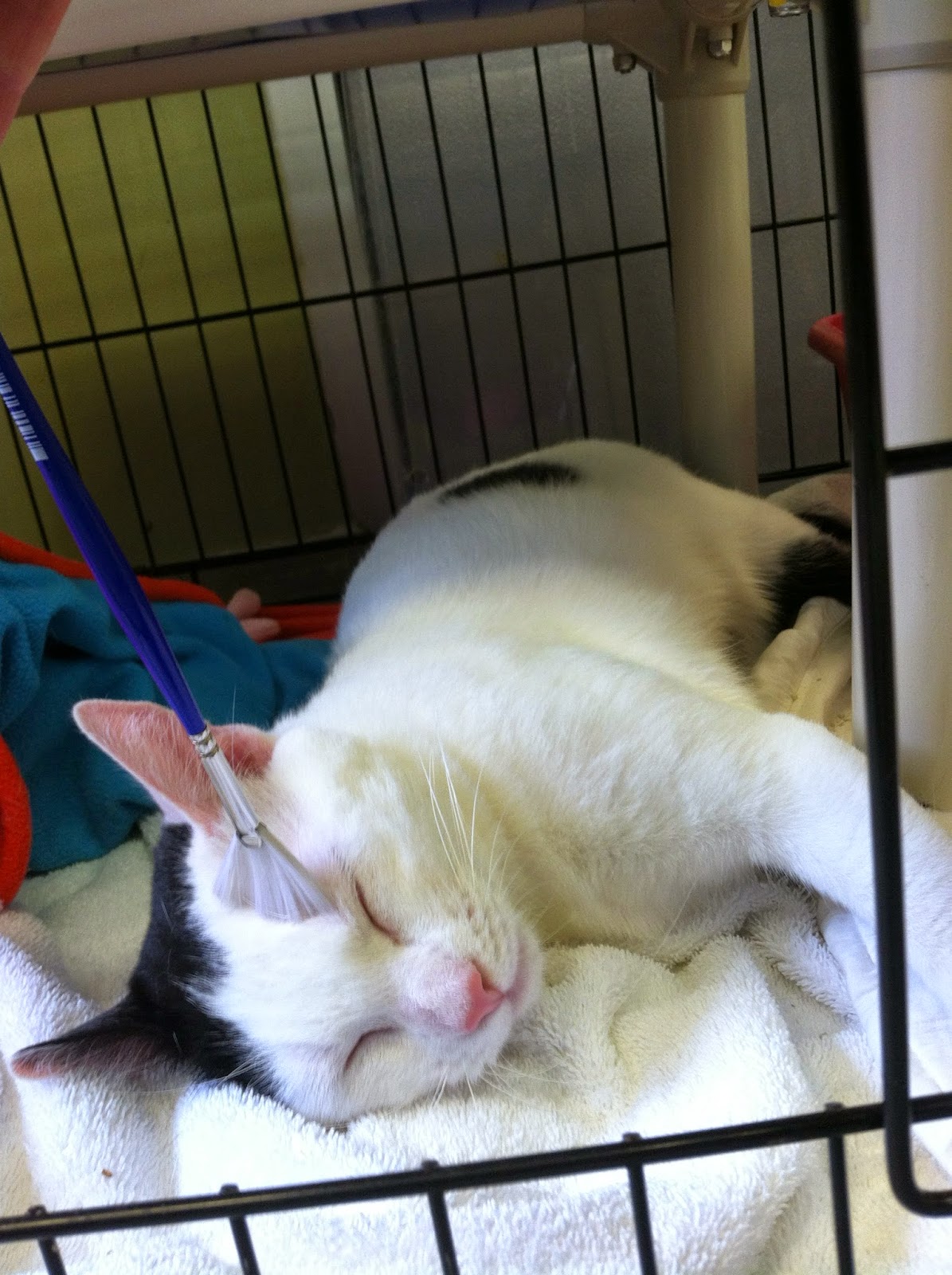 Ashanti is a lovely young black and white male cat with light green eyes that stare right into your heart.

I am sure he has touched the hearts of all who have met him at Bideawee.

He arrived at Bideawee in bad shape with a very badly injured paw.  They gave him great medical care, so he is doing much better now.  However, he seems fearful in a way that has led us to suspect he may have been abused.  He is extremely afraid of hands.

The wonderful Bideawee keepers of the cats (Jon and Kerrie) have been working with him to help him to feel safe and to encourage him to play, and he has gradually become more confident and less reactive.

I have been working with him with Reiki from a short distance, with TTouches using various tools, and with clicker training to help him feel at ease.  I also made a custom Bach Flower remedy for him.

Clicker training is something I have recently incorporated into the work I do.  I am finding that it can benefit so many different personality types - it can help bring a shy cat out of its shell, can help to focus a hyperactive cat, and it Ashanti's case, it seems to help both his confidence and his focus, and it is a way of connecting with him that does not need to involve direct touch.  He is in a larger cage with shelves, and I have had him jumping across the cage from shelf to shelf in the process of the training.  I will describe more about that in a separate post.

I particularly wanted to a recent TTouch session with him, because I think it is a good example of just how important patience is when working with with any animal, but especially an animal who is fearful.

As he is so scared of a hand coming towards him, his reaction to anything coming towards his face can be to bite.  So before even beginning the TTouch session, I usually sit quietly by him and share Reiki energy with him for a few moments (in this case, he was in his cage, though he is let out of the cage on a regular basis).  This gives me a chance to establish a quiet energy and connection with him. 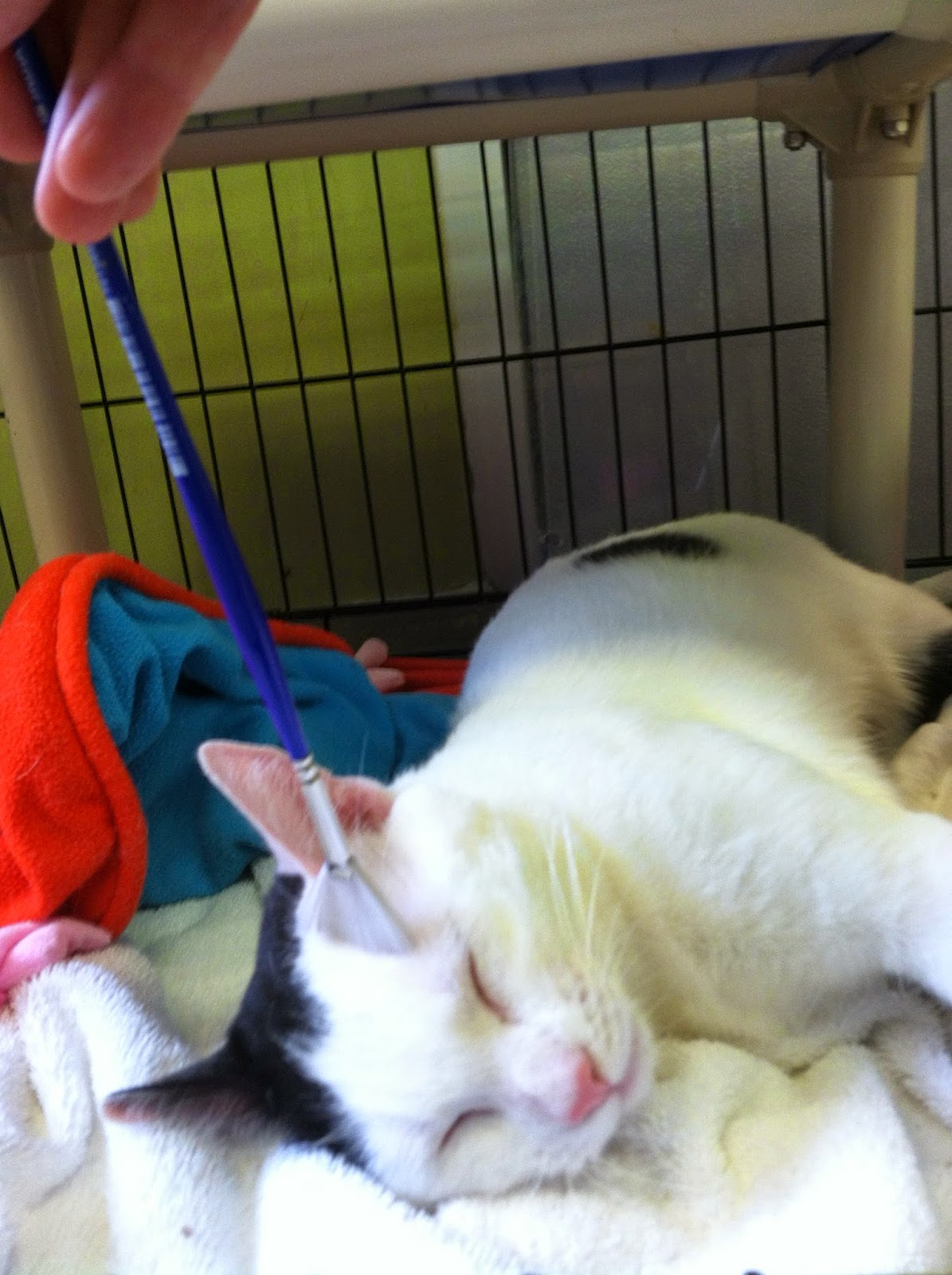 Then I started working with him a bit with a fan-shaped brush (the brush part is smallish, maybe an inch wide at the widest part).  His initial reaction was to bite at the brush.  I tried this a few times, and he still bit at the brush, instead of allowing me to stroke him with it.

At this point, one could easily give up or think that the biting is what he is going to do every time.  However, I wanted to see what would happen if I gave him a break and tried again.  So I sat calmly by his cage a bit longer, and he began to get into a calmer energy.  Next time I tried it, he may have pawed a little bit at it.  So I paused again, continuing to send him energy and saying (silently) to him that everything was all right.

Ashanti had been moving around a bit, and at this point he started to settle.  So I tried again.  This time he did not bite or paw at the brush.  I began to do TTouch circles with the fan brush on his forehead, and he began to relax into them.  He laid his head down and became completely relaxed as I worked with him. 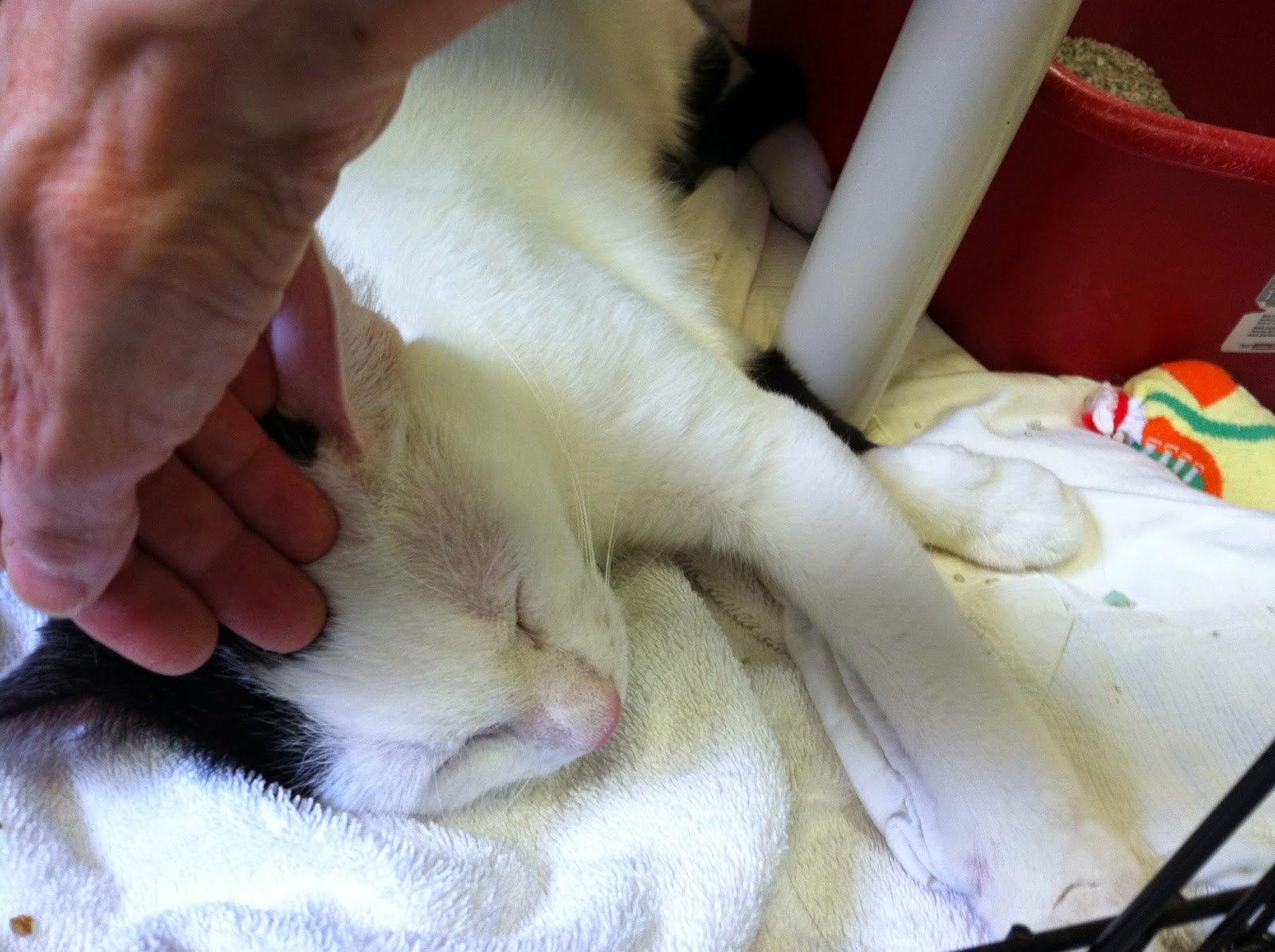 He was in such a snoozy mode that I decided to carefully try touching him a bit with my hand.  The first thing I did was to just use the back of one finger (actually just the flat part of my fingernail) to do some TTouches on his forehead.  He was very comfortable with that, so I continued for a while.  Gradually I found that he was comfortable with me gently stroking and doing circular TTouches with the back of the top part of several fingers on his head.  It was truly lovely to feel that direct connection with him, to feel him totally at ease with it, to feel that trust.

I know that this may not happen every day with him, but I do think with time and patience, he will feel more and more comfortable connecting with people.  I feel his soulfulness in his sweet eyes, and know that the personality behind his fear is coming forward more and more every day.

Below is a photo of me TTouching him with a paintbrush when he is out of the cage - it was great that he felt comfortable doing this :) 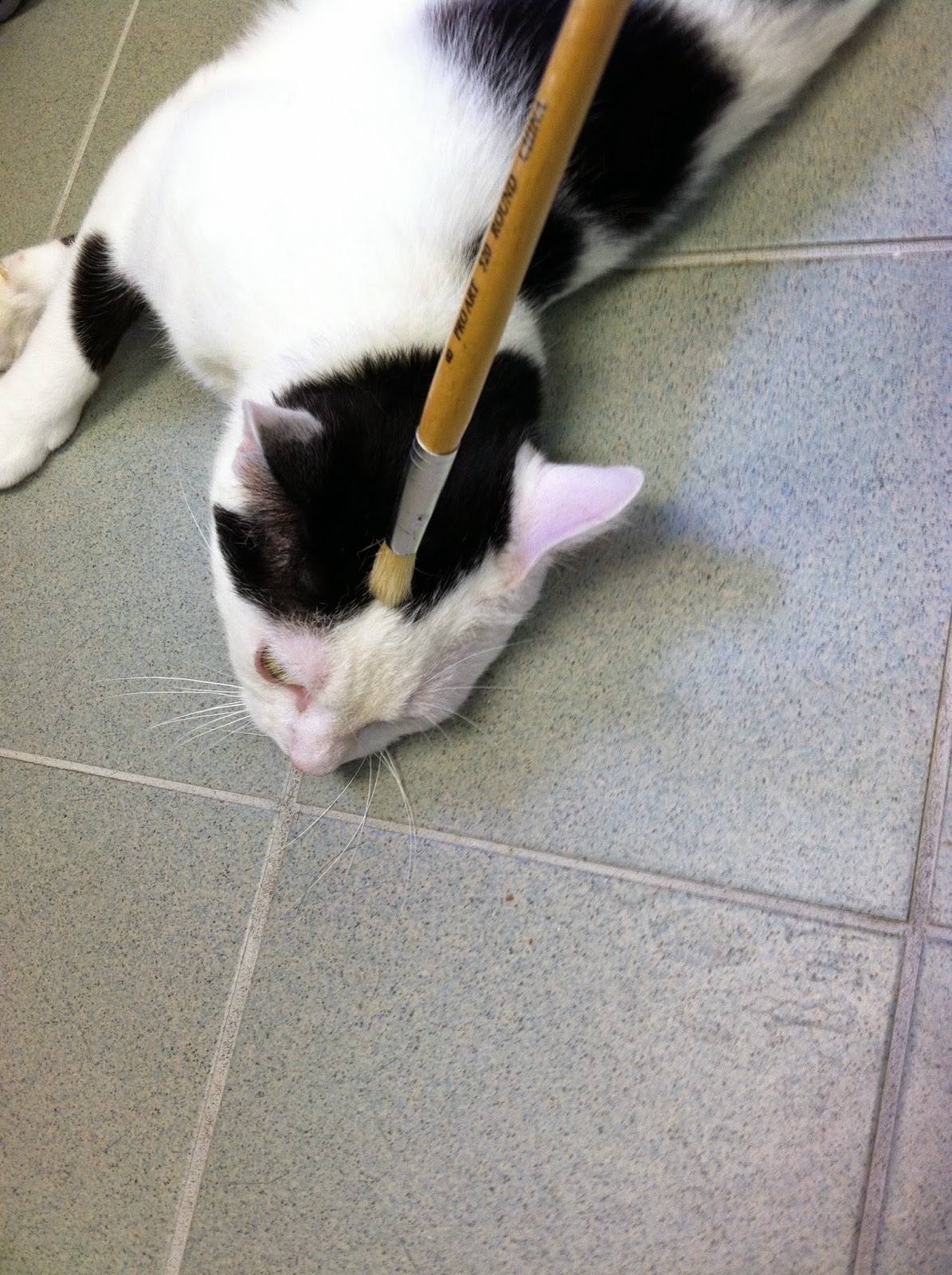 Thank you to all the dear Bideawee people for helping Ashanti and all the animals there :)

Posted by sarahsuricat at 11:33 AM