TTouch and Reiki at Bideawee: Quieting the Space with Panther 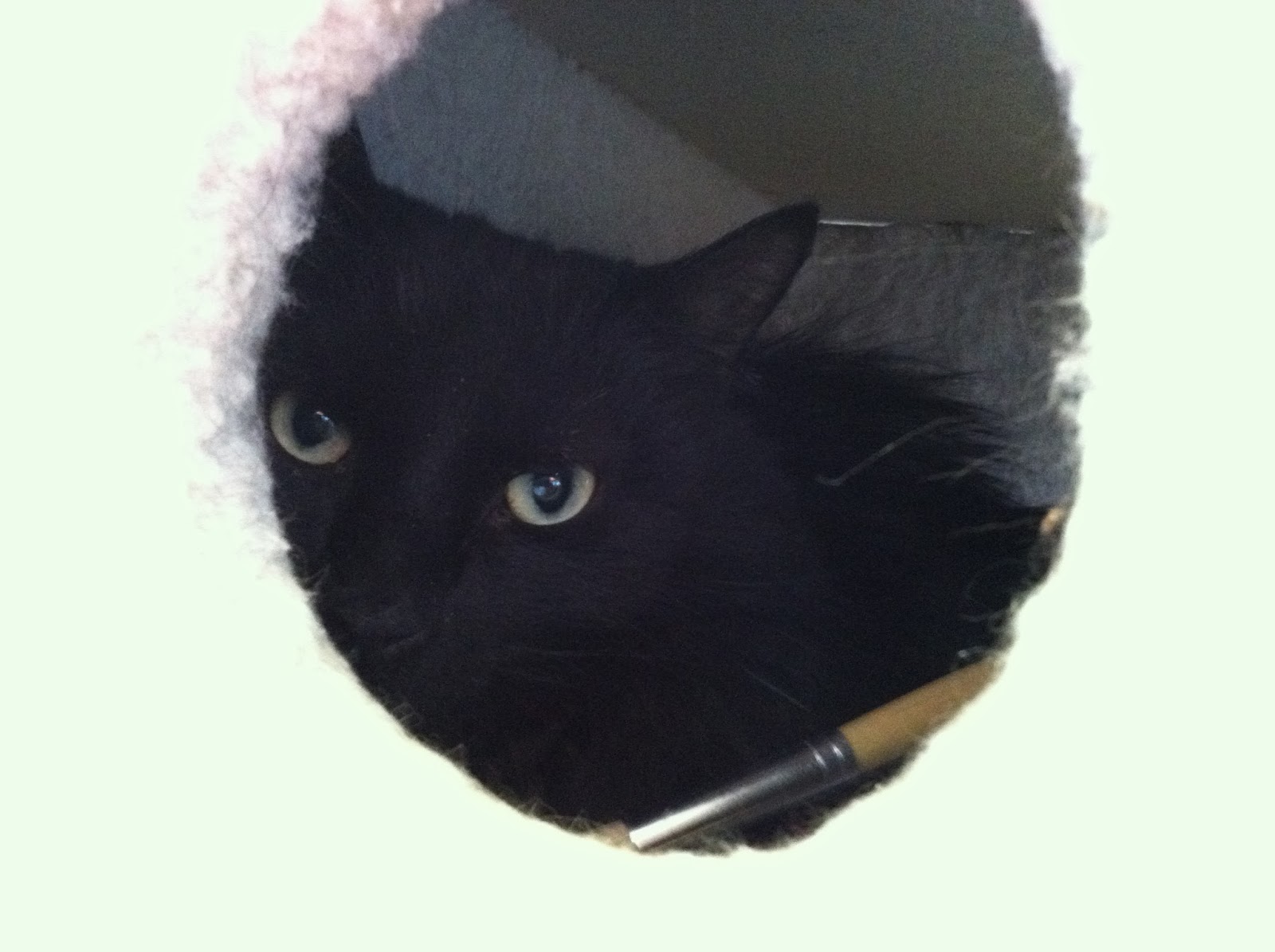 Panther is a handsome long-haired black cat at Bideawee shelter who was rescued, along with his sister Samantha, when they were being evicted from the store where they were living.  Samantha is extremely outgoing, whereas Panther is very shy. 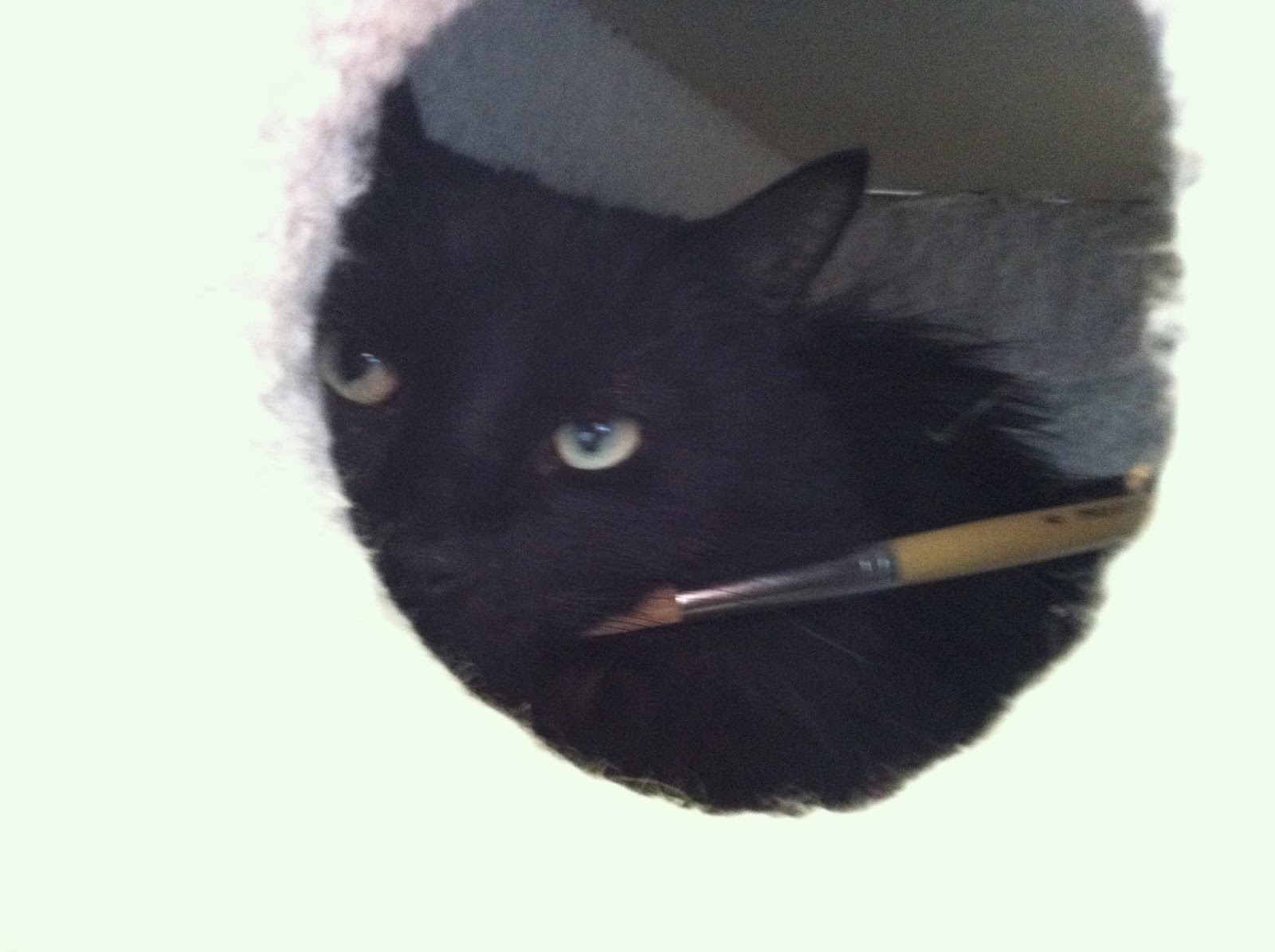 His beautiful, quiet energy does remind me of a panther, and I have been mindful to especially quiet my own energy down when working with him.

Quieting the space can happen in a few ways.  First comes quieting down my own energy.  Then, in the process of Reiki, TTouch, or both, the energy from these modalities feels like it literally changes the feeling in the space, even the texture of the air.

Panther is in a room (called a "resort") with several other cats.  There are toys, things to climb on (great use of vertical space in these rooms) and some nice little hidey spaces for privacy so he is quite comfortable there.  Bideawee puts a lot of care into how the rooms are set up and which cats are together so that everyone can be comfortable.

When I first started working with Panther, he seemed so scared that I decided that the best way to start with him was to share Reiki with him, at a short distance.  If he was on an upper level in the room, I would sit down and just begin to offer it from where I was, and he would gradually come closer to where I was.  If he was down on a lower level, I would stand a couple of feet from where he was.  Little by little, I would see signs of him absorbing the energy: his eyes closing, his body starting to relax.


At times, I would then see if I could do TTouches or strokes with him with a paintbrush or feather.  Sometimes, even this remote contact seemed a little much for him, so I would go back to doing Reiki from a short distance.  Other times, he would start to enjoy the contact, especially being stroked under his chin.  Being touched on his body was too overwhelming.
So I would try to take the cues from him of where he was for any particular day, but then gently see if I could nudge him forward a bit, try something new.  Even if we seemed to go two steps forward and one back at times, I always felt we were continually moving forward and gradually establishing trust.


I have found in general, that if he is in an enclosed place, he feels safer about being approached and is more apt to be responsive to TTouch.


Yesterday, he was on a lower level and in the little enclosure you see in the photos that is part of a cat tree in the room.  He was looking out of one opening, and there was an opening on the side that I could put my hand through.  I didn’t want to move my hand towards his face, as that would have scared him.
I started out by sending him Reiki from where I was (I was kneeling down so I was lowering my body position), and he soon was blinking and closing his eyes.  I spoke to him softly, telling him ahead of time what I was going to try (usually this I would do silently). Then I gently put the paintbrush through the side opening and began to do TTouch circles with him on his forehead.  He immediately began to relax into it, instead of his initial reaction being to pull away.  I would do a little bit, then pause, and then try a little more.  I stroked him underneath his chin with the paintbrush and he started to lean into it a little bit.  For him, this was very good progress.  In the clip above, you will see just a few moments of my work with him.  Such a pleasure to see him start to relax and close his eyes.
Then I decided to try something new.  I began to send him Reiki holding one hand a few inches above his solar plexus chakra (in the middle of the back).  One of the things this chakra has to do with is confidence, sense of self.  I felt a good amount of heat there.  After a bit, I just stroked him lightly, a few strokes, on his upper back, and he was ok with that.  I kept sending him Reiki.  In addition to Reiki near the solar plexus chakra, I also sent him Reiki directed at his heart chakra, which is in the center of the upper back, as I feel this is an area that could use healing.
Then after a few minutes, I tried a few TTouch circles with him on his upper back. He was a tiny bit tentative but didn't pull away, even settled a bit.  I was doing circular TTouches with much of my hand in contact, either Lying Leopard TTouch or Abalone TTouch (see my youtube channel for demos).  This was the first time that he didn’t pull away and get frightened when I made contact in that area of his body.  Such a delight to feel him start to settle into the TTouches, to feel that connection, to feel that trust.
I didn’t want to push it so I didn’t do this too many times.  Something to always remember is that a little bit can be a LOT for a frightened animal, and generally less is more.


I worked with a couple of other cats who are in the same room with Panther, then came back to him for a few moments, working with him around his head with the paintbrush, and again he was comfortable.

Each time I went to work with him again, and each time I have worked with him previously, I have had in my consciousness the idea of quieting the space, quieting the space.
When I left the room, he was relaxed and blinking and closing his eyes.  Look forward to working with you again soon Panther!!!!
And thanks to all the people at Bideawee for all the love and care they give to these special creatures :)
Posted by sarahsuricat at 3:21 PM