Update on Berry: Getting Closer! 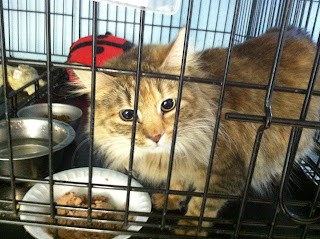 Berry is a gorgeous young little cat, apparently feral, who was brought into BARC shelter right before Hurricane Sandy.  She actually was rescued from the same backyard as my two cats who I adopted from BARC, Natalia and Emmylou.  And interestingly enough, she does somewhat resemble Emmylou!
Of course, the combination of where she came from and the fact that she is so fearful have both helped me to feel an especially endearing bond with her.
She was terrified and quite sick when she was first rescued, and it has been so heartening to see both her behavior and her health improving.  When she first arrived, she would swat and hiss when approached.  I have worked with her very gradually, doing TTouches on her with the back of the hand part of a plastic back scratcher.  Sometimes now I can transition to touching her directly with my hand, but I just do that for short amounts of time, as she still can get easily overstimulated.  I have shown a few other regulars at the shelter how to work with her, and she has been making very steady and noticeable progress. 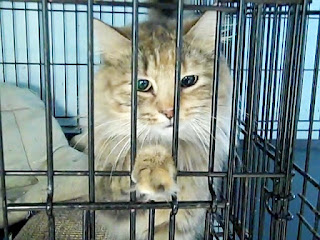 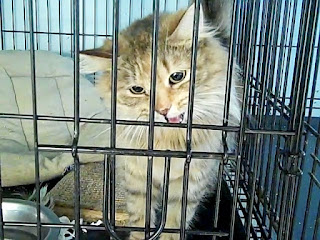 Little by little she is beginning to trust me as well as some of the BARC staff and volunteers. 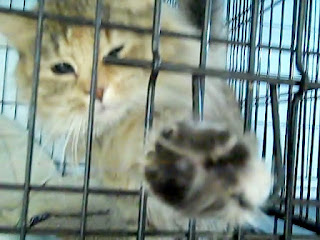 Now that she is feeling better, she also wants to play.  Like many ferals who are in the process of becoming less fearful, she can get confused between play mode and cuddle mode and sometimes swat. So I have started working with two back scratchers so that if she starts playing with one of them, then I can stroke her with the other.  I also give her frequent breaks to avoid her getting overstimulated.  Over some time, this way of working gently will influence a cat's behavior so that they will learn to play with a toy and not with your hand, while they are also getting more comfortable being touched.  When it feels safe to do so, I slide my hand down the back scratcher and do TTouches with my hand, keeping the second back scratcher ready to show her to use if she starts to want to paw at something.
Her whole expression and look on her face has changed as well - so beautiful to see!!
Love you Berry! and look forward to seeing continued progress with you.  And thanks to one and all at BARC shelter for showing her and all the animals such kindness.
Posted by sarahsuricat at 1:06 PM