Tuesday: Quieting the Atmosphere with an Extremely Sensitive Cat 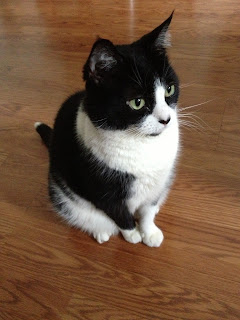 Tuesday is a gorgeous and very intense cat.  She is completely bonded with her guardian, Leila, but is terrified of pretty much anyone else.  She often hisses, swats and sometimes lunges at them.  Leila has had her for about 8 years.  Years ago, she was accepting of attention from people with a very gentle energy but at one point Leila was in a noisier household and since then, Tuesday has had an increasingly difficult time with people other than Leila.
It is so important with ultra-sensitive cats such as Tuesday to think of energy in terms of proportional volume.  What I mean is, what to us might be a tiny sound or movement, could seem huge to a cat that is frightened and hyper-sensitive.  So when working with this type of cat, I have to quiet and slow my energy down even more than I generally do when working with any animal.  In this way, I can start to really feel where they are and to be in that place where the smallest movement or sound can be huge.
When I arrived for the first session, Tuesday seemed to know that I was coming for her.  She came out and stared at me with very huge eyes.  I spoke calmly and tried to reassure her that I was there to help her.  When I walked across the room (which was not directly towards her but generally in her direction, she lunged at me, hissing.  I had Leila hand me the long wands which I use for doing TTouch with cats who are very scared of being touched directly, and just very carefully and quietly began to try a few TTouches with the wands, a few on her, and a few on the floor.  I could tell she was still very amped up, so I decided to give her a break.  Leila and I sat at the kitchen table, and I showed Leila some TTouches on a stuffed cat which I had brought.  During this time, Tuesday had some time to settle a bit.  She remained in the room, watching what we were doing, but got a bit more relaxed.
After that, I decided to offer her Reiki from a short distance for the second half of the session.  I felt that working from a distance with the wands was too overwhelming for her at this time.
From where I was sitting in a chair, I gently began to offer Reiki energy to Tuesday, silently letting her know that she only need take as much or as little energy as she wanted.
It took her a while to settle, but eventually she did.  Every once in a while, she would look at Leila, as though for confirmation that it was ok for her to receive the energy.  As we worked, I felt her pulling the energy in more and more.
When we were done, she was calmer, but unfortunately she got jumpy again when Leila and I both stood up as I got ready to leave.
Leila got back to me after a few days had passed, and said that Tuesday was agitated right after the appointment, but then began to get much better.  She said she and her boyfriend sat on the floor while she did some of the TTouches and that Tuesday was very calmed by them - and that she had continued doing the TTouches with Tuesday at various intervals in between this initial session and my next session with them. Leila said that Tuesday was much calmer about her boyfriend.
As a further challenge, Leila had gone away for a few days. Upon returning, the cat sitter said that Tuesday was actually rather docile.  And when Leila and her boyfriend returned from the trip, they took a nap and when they awoke, Tuesday was actually asleep on top of her boyfriend!
When I came for the second session (a couple of weeks had passed), I first gave Leila a Bach Flower remedy which I made for Tuesday, which should help to calm her energy.  Then I showed Leila TTouches using back of hand, which are especially useful for animals that are really on edge and apt to get easily over-stimulated. 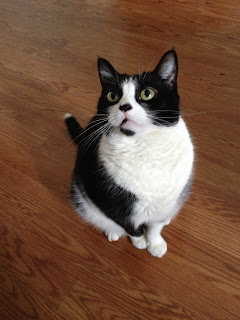 The rest of the session, I offered Reiki to Tuesday from a short distance.  However, this time I did not remain in the chair, but kneeled on the floor in order to lower my position, which can be calming for frightened animals.  I knew I was taking a risk, as Tuesday could get suddenly scared and then lunge at me, but I had to follow my intuition that this felt like the right move.
As I began to offer the energy to Tuesday, I felt that the area that felt it needed the most healing at that moment was the heart chakra.  As the session progressed, I also felt the energy pulled to the base chakra and to the solar plexus chakra.  These chakras can relate to quite a few things, so are a bit too complex to detail here, but balancing these three chakras felt they would help Tuesday with emotional issues and the nervous system as well as issues of security and grounding,
As I continued, I felt an increasingly strong flow of energy coming out of my hands and out of my body, and felt the energy filling her body.  I remained in the same position throughout the session, instead of trying to move closer, as I didn't want to take the chance of startling her.
While all of this was going on, little by little her body language changed - first she shifted her sitting position a few times.  Then she little by little shifted herself until she was lying down.  Next she stretched one paw out, then finally she rolled completely on her side, exposing her belly, and she stretched out in that position.  Her eyes, which initially were in that huge, extremely wide-open ultra-alert position, softened.  During this session, again she would sometimes look at Leila as if for guidance or approval or confirmation that this energy was ok to receive.  Tuesday is so completely connected with Leila.
As Tuesday stretched out on her side, exposing her belly to me, I felt tears come to my eyes, as I do so often when I feel the animal is really letting go of something held in very deeply.  It felt profound, almost as if she had been holding her breath for a long time, and now finally, in stages, was letting it go.  I felt a huge shift had occurred.
As Leila and I spoke after the session, Tuesday remained relaxed, with a much softer gaze.  And when I stood up to leave, she was still relaxed and didn't get startled.  Later that day, Leila emailed me that Tuesday had continued to be very relaxed and mellow for the rest of the day.
Thank you Tuesday, for trusting me enough to let go....I keep picturing you so stretched out and relaxed .. .. and look forward to seeing you soon.... xo
Posted by sarahsuricat at 6:34 PM