Calming Feral Kitty Berry: Slow, Steady, and in the Moment 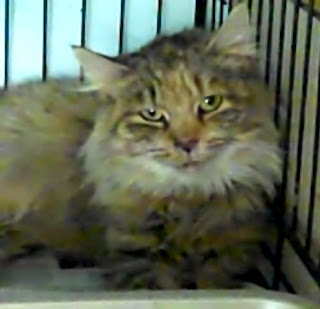 I'm calling this dear little feral kitty Berry.  She was rescued from the same backyard as my two cats (Emmylou and Natalia).  She is younger, and has medium/long fur, but has a bit of resemblance to Emmylou, I think.  She was brought into BARC shelter right before Hurricane Sandy.
Because Hurricane Sandy left many of us, including me, without power and hot water for about a week, it took me a week to get back to BARC, but I was eager to do what I could to help calm her.
When I came back to the shelter, it was clear she was as terrified as when she had been brought in.  When I first work with a new cat, unless they come right up to the front of the cage to greet me, I most often use a long-handled tool such as a plastic back scratcher or paintbrush to touch them.
But before I even do that, I talk quietly (or silently, inside my mind) to them, reassuring them I am there to help them, and would only do as much as they are ready to do.  I start sending Reiki energy to them from outside the cage. 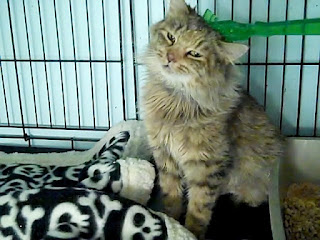 The next time I worked with her, I gently approached her with the back scratcher (standing sideways to the cage, and kind of approaching her from a diagonal instead of straight-on), stroking the sides of her cheeks and under her chin a bit.  At first she was a bit hesitant, but then she started to gently rub her face against the back scratcher a bit.  I worked with her for a while this way, giving her breaks, then starting again.  I also did some TTouch circles with the scratcher on the top of her head and the base of her ears.
Each time I continued to work with her, she was more receptive to touch and began to come forward and eat her food while I was working with her.  At this point I could do TTouch circles and zigzags on her body as well as her head. 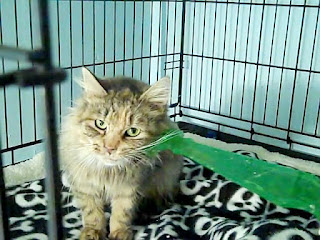 One day when I opened the cage and began to work with her she sat straight up and looked at me right in the eye.  I could tell we were having a breakthrough by the way we were connecting.  She was really looking at me and I felt the energy from her go right to my heart.  she began to push her head into the back scratcher and began to walk forward towards the cage door.

I began to work my hand down the handle til I was touching her directly.  She was rubbing into my hand and kneading her paws, looking a bit like she was marching.  I thought she was going to come out the door!!  She seemed so energized and felt so good from the session, first she went to her wet food, then her dry food, then her water :) 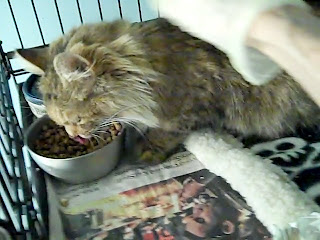 Since that session, when I first see her I blink at her and she recognizes me, as opposed to starting with a hiss.  I showed a couple of other people in the shelter how to work with her gently and they have had good success working with her as well.  Now I am able to approach her with my hand, though I still start from a bit of a diagonal approach, first putting the back of my fingers on the back of her head and working from there, so I am not sticking my hand in her face.  It is really important, especially for frightened cats, not to just directly face them and stick your hand in their face. 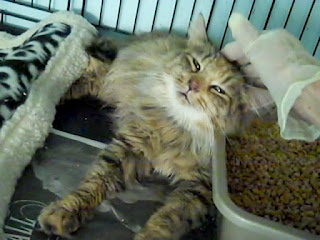 She now comes right to the front of the cage, kneading and sometimes flopping on her side. Last time I worked with her, she literally jumped up to butt her head into my hand. She really is a beautiful little cat, and it is amazing to see her inner beauty coming forth as well.
It will take her a while to be comfortable enough to be receptive to others, especially potential adopters she is meeting the first time, but she has come such a long way in a few weeks, it is beautiful to see.
Of course I feel an extra connection with her too, being that she was rescued from the same yard as my two.
Thank you Berry, it is such an honor to connect with you.  Look forward to seeing you soon!
Posted by sarahsuricat at 2:05 PM