Connecting with Krishna: Closer and Closer... 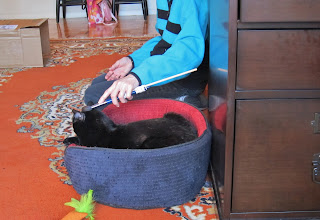 Krishna is a beautiful black cat who is generally very fearful of people other than his human caretakers. That fear can manifest itself in hissing, swatting behavior.  But I have found that if I approach him from a very quiet place in myself, he is able to be calmed by my energy. His human mom Rebecca had tried a new cat sitter, and Krishna had been scared and then scared her, stalking and cornering her, etc.  Rebecca was afraid that Krishna may have had a setback from that experience.

So when I met with them, I wanted to be extra-careful not to startle Krishna, and to do my best to really be in the moment with him.  On my way to the appointment, I began sending Reiki energy to him.

When I walked in, he came right up to me to sniff me, which was great.  I stayed very still and did not try to touch him, just let him sniff me and walk away.

Then I started doing some TTouches with a very soft paintbrush that I have used before with him that he has responded to very well.  It is like a makeup brush, but with a longer handle.  Then, to give us more space, I tied the brush to a wooden dowel.

For some reason, he usually reacts to this brush as though it were catnip, rubbing his face against it and rolling around, which he did this time.  In the process of doing the rolling around, he came very close to me.  If he started to stare at my eyes, I would avert my gaze, so we wouldn't get into a locked staring contest.  I was watching his body language very closely.

After a bit, he settled with his body sideways to me, quite close to where I was. I had started letting Reiki flow from my hands as soon as I came in the apartment, but at this point I concentrated more on the flow of the energy, and kept doing deep breathing to help the flow and to keep myself (and him).

Eventually Krishna got into in his cat bed (pictured above), which is a safe place for him. Shy cats will often have certain places where they feel especially safe receiving contact, and for him at this moment it is the cat bed.  Still kneeling sideways to him, I slowly inched toward where he was. I was sending continuous Reiki and I felt a lot of energy flowing. My hands were very warm.

And after inching towards him in a kneeling position, I ended up kneeling right next to his bed.  Slowly I began doing little circles with the paintbrush on his head near his ears and on his forehead. He relaxed more and more.

Little by little worked my hand down the brush to do some chimp TTouches (circular TTouches using the back of the fingers) and strokes on his head.  In the photo below, I am gently stroking the back of his head with the back of the upper part of my fingers.  The back surfaces of the hand and fingers are less intense-feeling as there is less heat and energy there, and so that can be less threatening for a frightened animal.  After doing the TTouches and strokes for a few moments, I would pause to observe his body language, then start again if it felt right to continue.  He continued to get more and more relaxed, laying his head down to go to sleep.  Again, I kept checking in on my own breathing and relaxation so that I stayed relaxed as well.  We continued like this - I was very much in the moment, so it felt like we were there a long time, but it could have been about ten minutes - I'm not sure!!

This is the second session with him where I have been able to have extended direct contact with him, which feels like a great honor, as he is generally only receptive to being touched by his two human guardians.  It was lovely to feel him become more and more relaxed as I worked with him.

When it felt right, I gently ended the session and thanked him, and told him I looked forward to seeing him soon :).

Once again, Krishna reminded me to let go of whatever expectations I may have, and to truly be in the moment with him.  It is during these special moments that the most beautiful breakthroughs are able to happen. 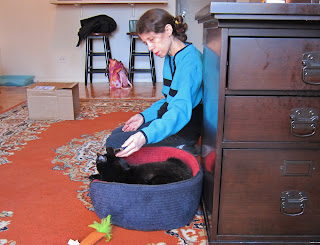 Posted by sarahsuricat at 4:48 PM