TTouch and Reiki with Jinx: Relax and Energize 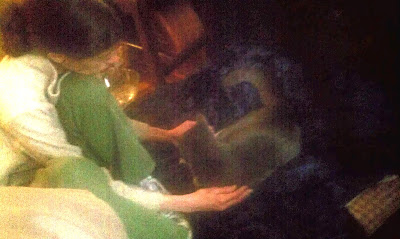 Above: Reiki with Jinx (photo is a bit hard to make out but I have one hand about six inches in front of his chest, near where his hind feet were, and the other a few inches away from his back.

I went to work with Jordyn's (http://dancingminddesign.com/) cat Jinx today, who has been losing mobility in his back legs, either due to an injury or a tumor. He has been continuing to lose mobility but TTouch and Reiki (combined with a lot of love and contact with Jordyn of course) have been helping him to keep in as optimum balance as he can, given his condition.
I had made a Bach Flower remedy for Jinx, and Jordyn gave it to him right before I came over, so he was in a relaxed mode when I got there. He was resting on his bed, so I sat down near him and started out by sending him Reiki energy from a short distance away. Many, actually probably most cats prefer to have Reiki energy offered a bit off their body as opposed to directly hands-on, as they are very sensitive and the energy can be too intense for them with direct contact. So after a few minutes I did move a bit closer, but remained about 3 to 6 inches away from his body during most of the session. I had one hand near his hind legs and feet, the other hand above the center of his back. As these are two areas which are compromised, I felt guided there and he responded, relaxing more and more, eventually taking a little nap. At one point I put my left hand very gently around one hind leg and then the other, offering warm energy there, as he appears to often have very little sensation. And with my other hand, as I felt guided, I moved my hand over the various chakras on the back, feeling the energy grow stronger as I worked. 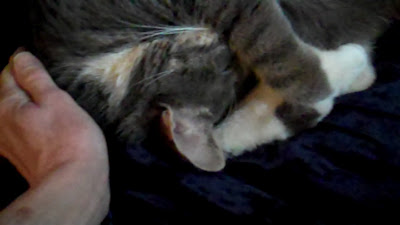 When I felt he had enough, I quietly closed the Reiki session and spoke to Jordyn for a few minutes. She felt she had benefited from the session as well - she said initially she felt sleepy but by the end of the session she felt clear and energized, which is great. And as we spoke, we saw Jinx cleaning one of his hind legs and his hind paw, which was wonderful to see.
Then Jinx got up and started to move around a bit. His hind feet can flip over so he is dragging them, but if you help adjust him so they are on the ground, he can start to use them a bit. I also found that, as I have done several times, with my hand gently around his tail (I am not holding the tail at all, my hand is just in a cupped shape around the fur of his tail, barely touching the end of the fur), and moving the tail in gentle, slow circle and a quarter movements, he starts to get a better sense of balance. Connected clouded leopard TTouches going down either side of his spine seem to be helpful as well.

Love you and see you soon, Jinx!
Posted by sarahsuricat at 2:54 PM