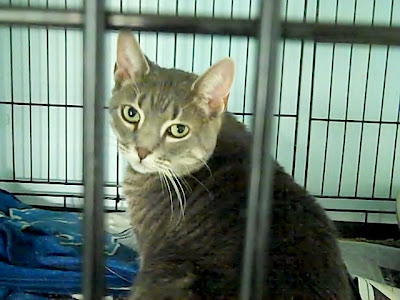 Val is a beautiful cat at BARC Shelter, who I have been working with even more attention, focus and sensitivity, as she can flip from being affectionate to swiping and scratching. I feel she wants the attention so badly, but can get over-stimulated with too much contact.
I am working with her very gently, and with short sessions, to help her become more and more accustomed to the experience of pleasant contact, stopping before she gets to the point of overstimulation, when she is likely to scratch someone
Before I start to work with Val, it is very important for me to center myself, as she will pick up on my energy. So I focus on grounding myself, and beginning to let Reiki energy flow through my body. Before I move towards Val to touch her, I stand outside her cage with my body sideways to the cage (much less threatening position than straight-on) and begin to send her Reiki energy from there. She will usually either go lie on her bed or come up to the front of the cage and settle there.
The two pictures below are from a session in which she settled right at the front of the cage. After she settled there, I reached through the bars of the cage and did little raccoon TTouches around the base of the ear, which is a very calming place to work as it connects with the triple heater meridian, which has to do with respiration, digestion, and distribution of energy through the body. I kept giving her breaks as I did this, to avoid her getting over-stimulated and so I could pay attention to her body language to see what would be best to do next. By this I mean that I did the TTouch circles for a few seconds up to a minute or so, following my intuition, give about a half minute break or longer, then start again. She settled into these TTouches very well, but I didn't want to push it so after a bit I gave her another break and tried something else. 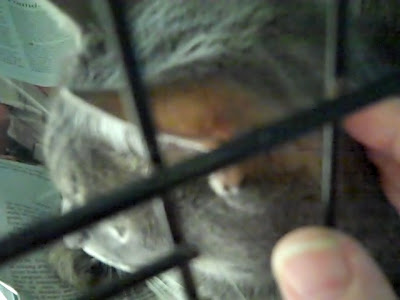 The next thing I did was some TTouches on her forehead using the back of the tip of a finger or two. There's no official name for this TTouch, but I was doing the clockwise circle and a quarter movement with perhaps just my fingernail, or at other times a bit more of the back surface of my finger. The forehead can also be a very calming area to work for many cats.
I was using very light pressure, as is usual with cats, as they are so sensitive, just enough to move the skin around in a circle and a quarter. She calmed quite a lot as I did this, relaxing and closing her eyes. After a few minutes, I gave her a longer break, then later in the day went back to work with her again. 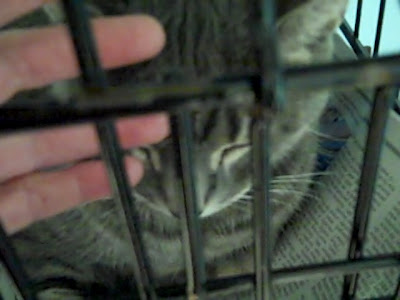 A few days after I took these pictures, I had another very interesting session with her, which surprised me even further. This time after I sent her Reiki energy for a few minutes, she settled on her bed in the back of the cage.
I opened the cage, still with my body sideways to the cage, and began to do TTouches on Val's forehead with the back of my fingers. But this time, to calm her (and, I think, to calm myself), I found myself softly and slowly saying "b-r-e-a-t-h-e". As I did this, I felt a calm bubble of energy around us, "b-r-e-a-t-h-e", and Val's eyes began to close. She looked very relaxed in this moment. We stayed in this floating feeling with the TTouches and occasionally saying "b-r-e-a-t-h-e" again for a while, hard to know whether it was five minutes, ten minutes. But as one of our TTouch sayings goes, "It's moments, not minutes" that matter. So when I felt it was enough, I told her how good she was, thanked her, and then backed away to let her rest.
I realize that I was taking a risk putting my arm and hand inside her cage, and but sometimes I just have to follow my heart and go forward when I feel it is right. It is important though to remember that when you do that, you need to acknowledge that you are taking a risk and are responsible for that.
That being said, I am very excited to start to see a shift in Val's behavior with me and hopefully soon with other people, and would love to see a shift the way people see Val (because of her past behavior). I keep visualizing her in a positive way. Look forward to seeing you soon, Val!
Posted by sarahsuricat at 4:58 PM