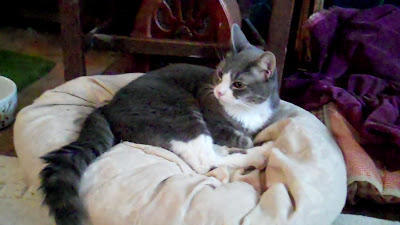 I've been working for a while with Jinx, one of my friend Jordyn Thiessen's (http://dancingminddesign.com/) animals. He has been losing mobility in his hind legs, either due to an injury or tumor. Through TTouch and Reiki I have been working to keep him in as optimum balance as is possible. Though he is continuing to gradually lose mobility and, it seems, sensation in his lower back and legs, these modalities can help him to at least be as comfortable as possible and to help keep as much connection as is possible. TTouch influences the nervous system, and Reiki can help to bring relaxation and optimize his potential for physical and emotional balance, at least to help maximize what is possible given his condition. Recently I made a bach flower remedy for Jinx too, which should help him to feel more comfortable.

When I began today, he was very cozy in one of his cat beds so I began with Reiki. As he usually does, he shifted his position so that my hands would be where he wanted the energy to go. Another thing he often does which he did today was to connect with me by touching my hand or my arm with one of his paws.
Today I spent a lot of time with my hand on the lower half of his body and at the base of his tail, but during the session I did have my hands over the chakras on the upper part of the back as well. He was very receptive to the energy and became very relaxed, stretching out and he had a dream at one point. At various points I did some TTouch as well, connected TTouches down either side of the back and some raccoon TTouches on his hind paws and his legs. 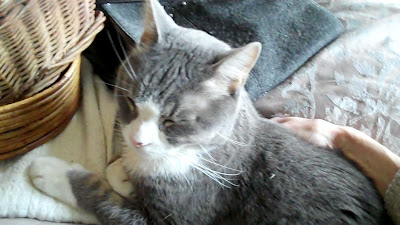 During the session, the other pets in the apartment became relaxed as well and took a nap. Petey, one of the two dogs, snuggled up right next to me.
After the Reiki session he was interested in moving around a bit. He is having increased trouble feeling his hind feet on the ground and will often knuckle over and be dragging one or both hind feet and legs. As he walked, I followed him, lifting him a bit to put him more on his feet, then doing some TTouches on his hind feet and strokes down his legs and some strokes and TTouches down his body as well, to help remind him of whatever connection he can feel. After a minute he did start to use his feet a bit more. Another thing I did that seemed to help keep him on track was to gently influence him by having a hand on either side of his hips about an inch or so away, kind of guiding him to stay in a narrower path so that he would be less wobbly. This seemed to be useful for him as well.
Jinx had worked up an appetite by this point, so he had some food and water, then laid down again. I did some Reiki with him about a foot or so away, directing the energy to the room as well to Jinx, and the energy in the room became very calm. Jinx began to close his eyes and look very cozy. I closed the session and very quietly got up, thanking them and saying goodbye.
Much love to you all and see you soon! Will be sending extra Reiki to Jinx distantly as well.....
Posted by sarahsuricat at 2:52 PM