TTouch and Reiki with Ms. Tuna at Bideawee: A Deep Sigh for an Anxious Cat 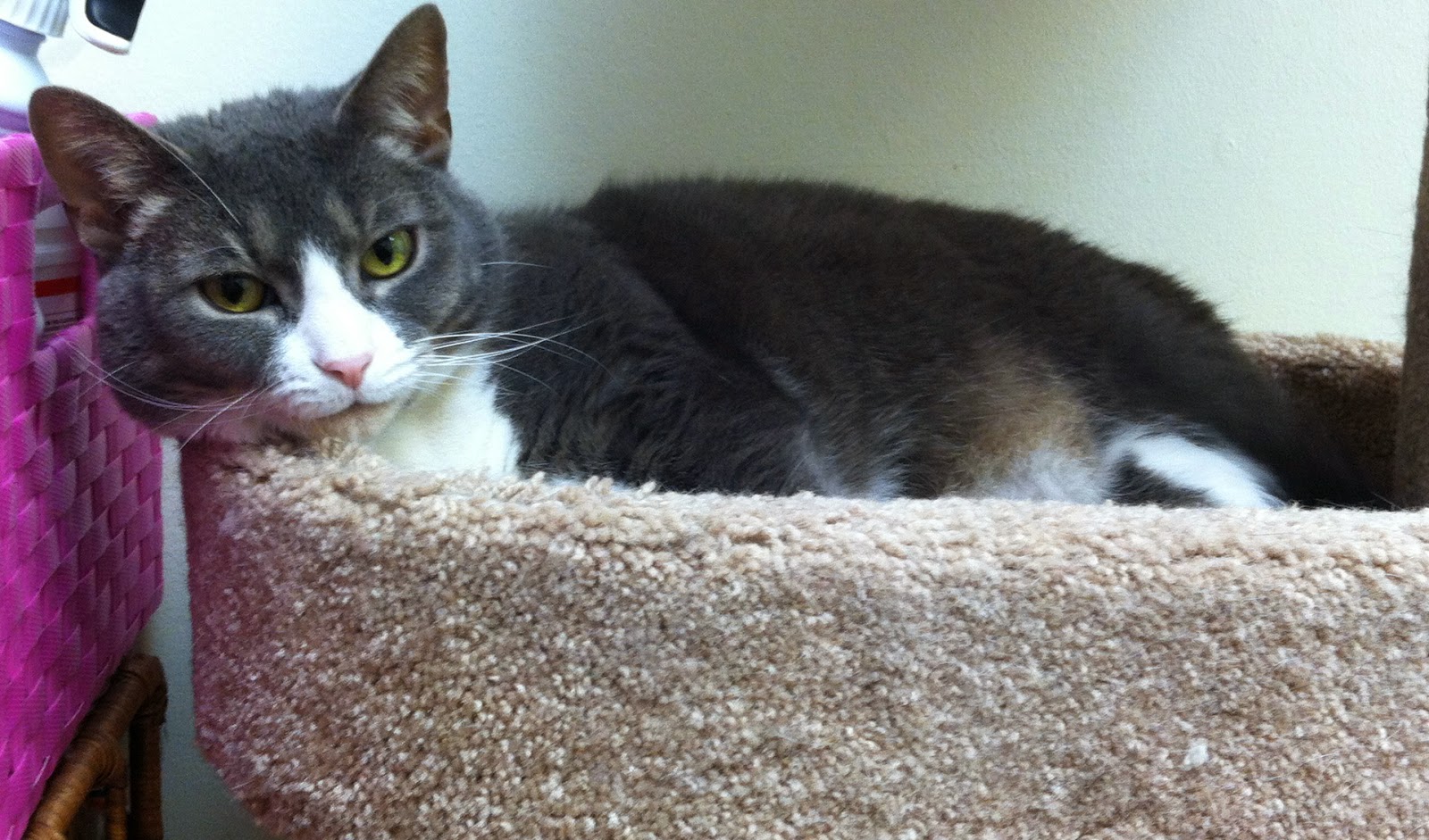 Ms. Tuna is a dear grey and white female kitty at Bideawee, and I had the pleasure and honor of starting to work with her recently.
She has Feline Hyperesthesia, which can involve episodes of extreme distress and obsessive behavior taken to the extreme:  rippling and rolling skin, suddenly obsessively grooming, dashing around as if trying to get away from something terrifying.  So whatever can be done to keep her stress level lower is good.  She is living in one of the staff's offices, and that works well for her, as she can be out of a cage and not in a room with many other animals.
She seeks human contact, but seems to be afraid of people actually touching her.
For my first session with Tuna, I entered the office with a handful of tools which I use for doing TTouch with cats who may not want to be directly touched:  several types of paintbrushes, a feather, and a plastic back scratcher.  I also had in mind that Reiki would be of help to bring down her stress level.
I walked into the office and quietly sat in the chair next to the desk.  Ms Tuna came right up to me, started rubbing against me and sniffing my hand.  She actually put a paw up on the chair as though she might jump in my lap.  I didn't want to scare her, so I sat very still initially.  Then I held out the back scratcher so she could come and rub herself against it, which she did, so I started to do a few TTouches at a time on her back as she walked back and forth.  I would do a few TTouches, pause, and then try again.  After a few times of this, I would give her a longer break and watch her body language to see what I should do next.  She seemed to enjoy the TTouches, at times leaning a bit into them.
I also tried doing TTouches with a feather and with a small fan brush.  She responded well to these also, but the back scratcher seemed to work best, as that gave her the most space.  She also seemed to enjoy the hard, smooth surface of the back scratcher.
At times I kneeled on the floor, but mostly I sat in the chair, feeling that it was best not to be too much in her face or at the same vertical level.
At one point I did a long pause, and began to send her Reiki energy.  I slid to the side of my chair, as she had looked at me several times as though she would like to sit next to me.  She stepped onto the chair and put her nose to my hand - but unfortunately, she got a little shock because of the dry winter air creating static electricity!
She didn't seem to be too scared but did back off, sitting at chair height, facing me, on a cat tree.
I continued sending Reiki energy.  As I often do, I could feel her mind working, wondering, what is this feeling? what is this energy?  It is a new feeling.
She got more and more settled as I continued.  Silently, I told her, "I am here for you.  You only need take as much or as little energy as you like." 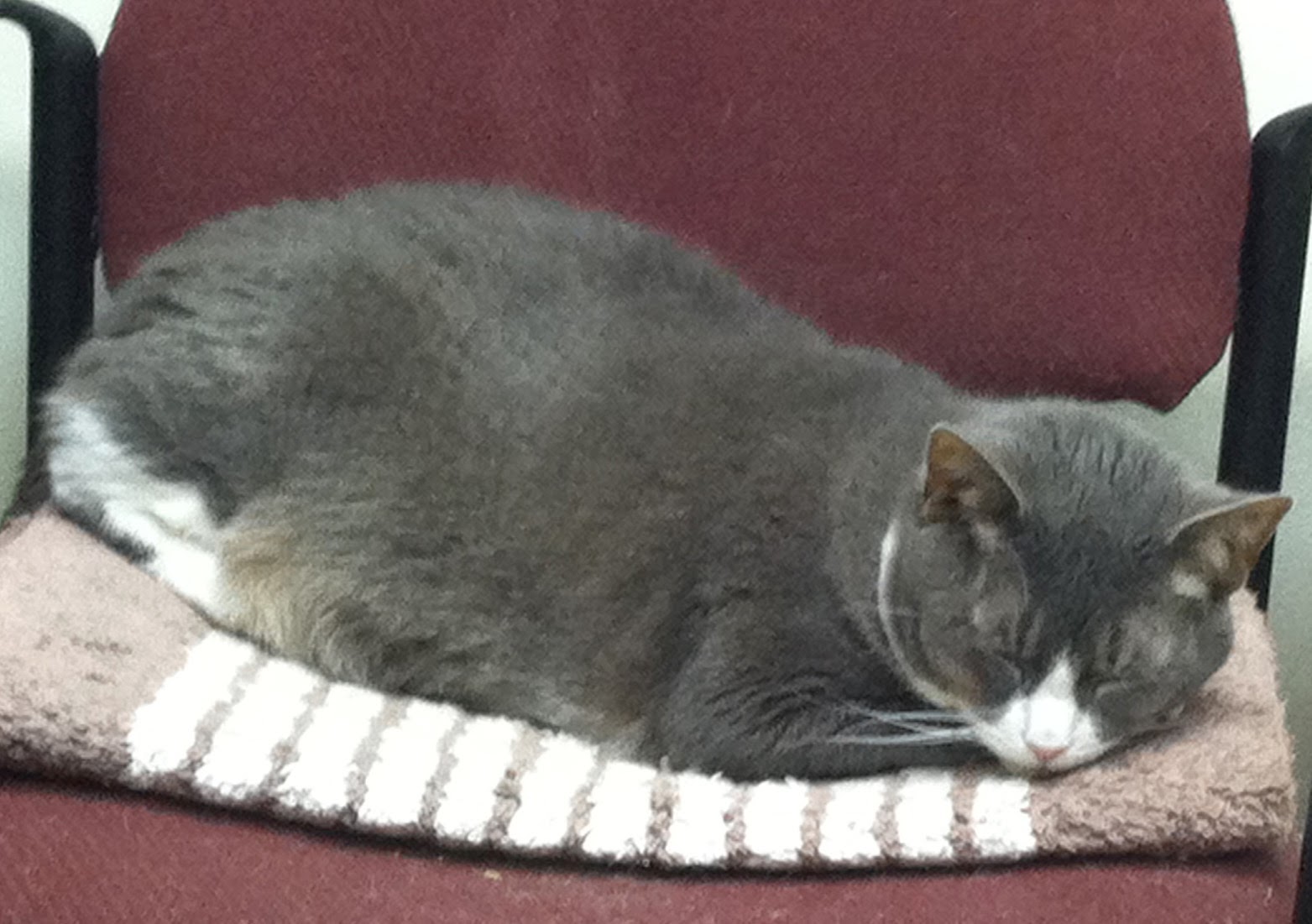 Then, what made my day the most was what happened next.  I saw and heard her do a huge sigh - that huge body sigh that felt so deep.  That felt like she had let go from such a deep place, and felt a relief and release that was profound.  Such a beautiful moment to share with this cat.  She curled up and got into a napping position. I continued for a while longer, and then left her to nap in peace.
I have worked with her a couple of times since that day.  Last week, I got her started on a Bach Flower remedy, so that will be interesting to see what happens as a result of that.  I gave it to her the first time last week, and after the combination of that and a TTouch/Reiki session, she looked very at comfortable.
I have been working with her slowly with TTouches, but what I find she is most responsive to Reiki, quite possibly as that is so powerful, yet doesn't need to involve touching at all, so she is less apt to get in that overstimulated place.  She is starting to recognize the Reiki energy now - she looks at me as though to say, "oh that's right, that makes me feel relaxed", and I see her body slowly begin to be more at ease.  She is also starting to recognize that more relaxed feeling as a place where she is comfortable, where she wants to be.
It is so beautiful to see this cat looking peaceful.
I look forward to working with her tomorrow, and love and thanks to all at Bideawee :)
Posted by sarahsuricat at 4:02 PM