TTouch and Reiki at Bideawee: Teddy and Panda, Ebony and Ingrid 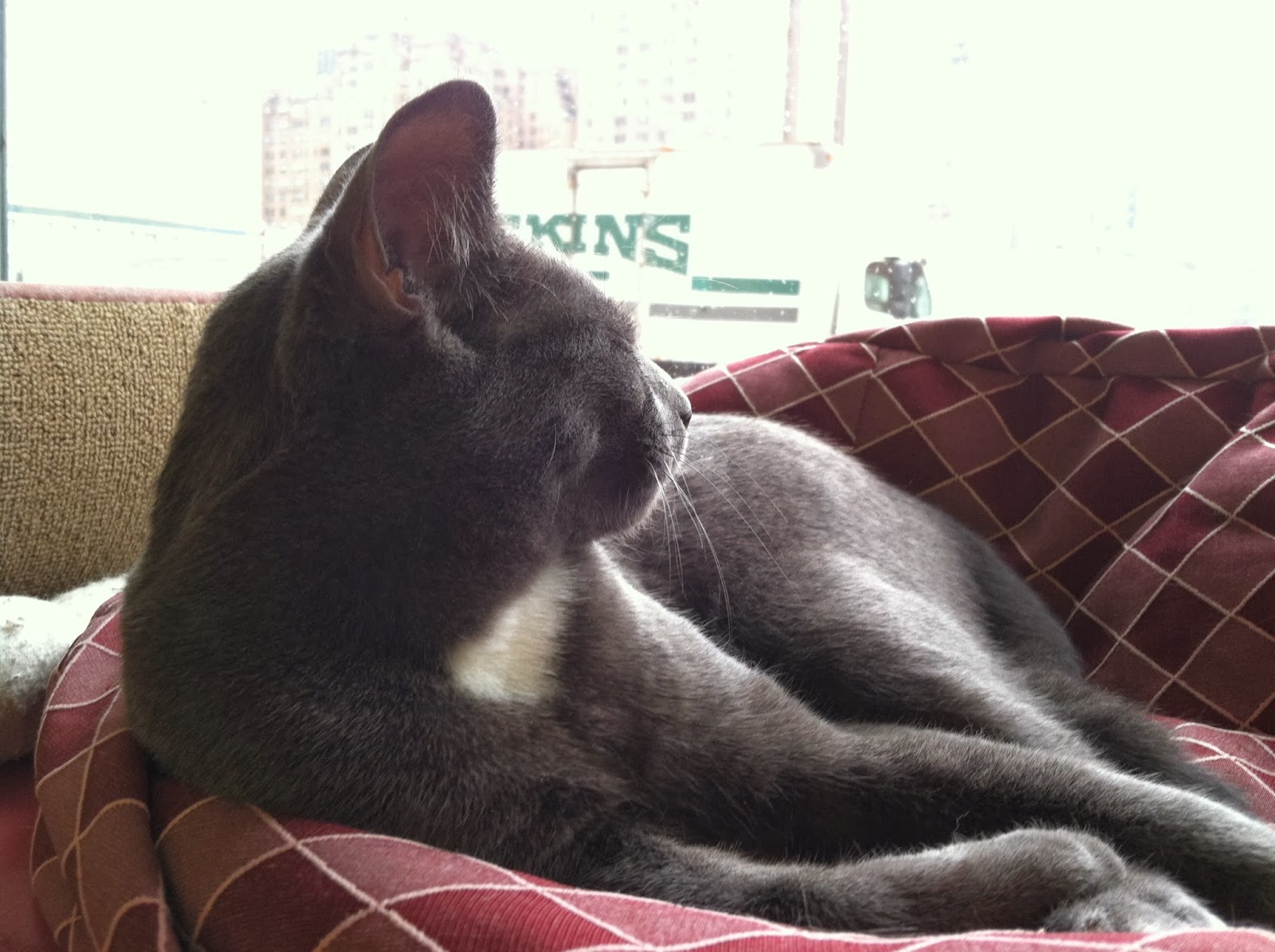 Above:  Teddy
Hi folks! It has been very hard to keep up with the blog posts as life has been busy!

This post is a bit belated, as it is more complex, involving four cats instead of just one.  It is actually about the first four cats I really focused on at Bideawee.

The end of last year, I taught several TTouch workshops to volunteers at Bideawee in Manhattan.  It is a great place - very positive environment, well set up, well-run, and staffed by knowledgeable and caring people.

Bideawee has a terrific setup for the cats.  A good number of cats are housed in what they call “resorts” – small rooms where the cats can roam, play, sleep, etc that are filled with toys, climbing places and cozy places.  They make really good use of the vertical space with shelves and cat trees etc.  The cats that are in cages have clean, cozy cages and most of these cats have opportunities to be out of the cages on a rotating basis to play or just hang out.


The cats I will discuss here are Teddy, Panda, Ebony and Ingrid, who were housed together in one of the resorts. 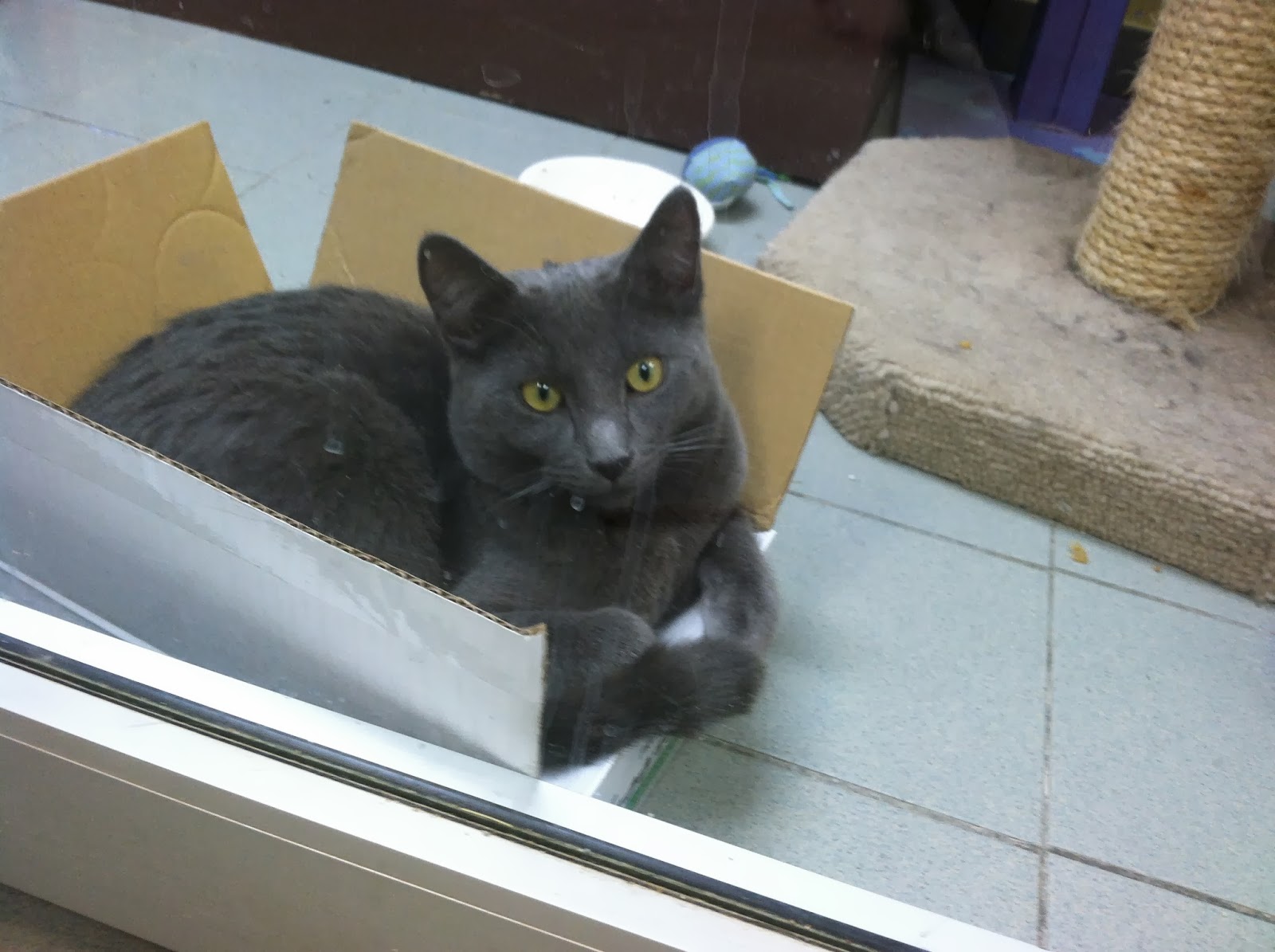 Teddy and Panda are two adorable young brothers who came into the shelter completely feral.  They both have very gentle, sweet, playful personalities but were still quite shy when I first began to work with them.  Panda was more forthcoming than Teddy when I began working with them, but apparently they had switched back and forth as to which one was less or more shy.
Ebony and Ingrid are both friendly girls, but when I first started working with them had a rather low tolerance level for touch, and could get swatty after a short while.
I entered the resort with these four cats with a couple of different paintbrushes, not sure of what would happen but excited to work with the cats.

One thing that I found nice about being in the room with the four cats was that it was great to be able to alternate between the four cats, thus giving them the break time that they needed, especially in the beginning when they were getting to know me, but it was also important later on to really be in the moment with them and feel at any given time whether it was best to continue, or to give a break and come back in a while.  Sometimes I would literally do just a few TTouches, other times it would work into a longer session, depending on how they were reacting to me. 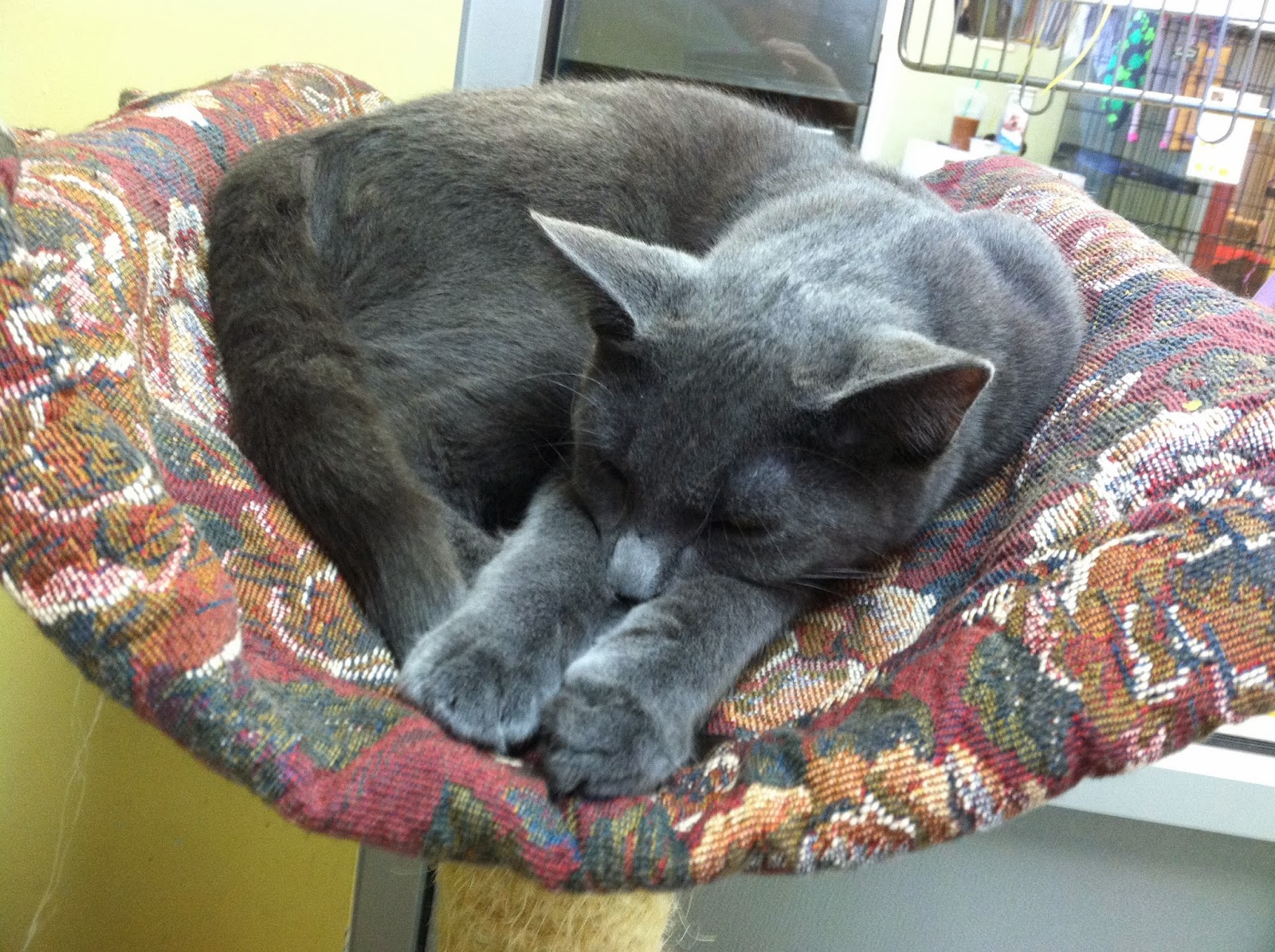 
Panda was in a cozy spot curled up on a cat bed.  I first began to TTouch him using the paintbrush, as I didn’t want to startle him by touching him directly with my hand too fast.  At first he seemed hesitant, but pretty quickly he settled into some TTouches with the paintbrush, and then with the back of my fingers on his forehead. 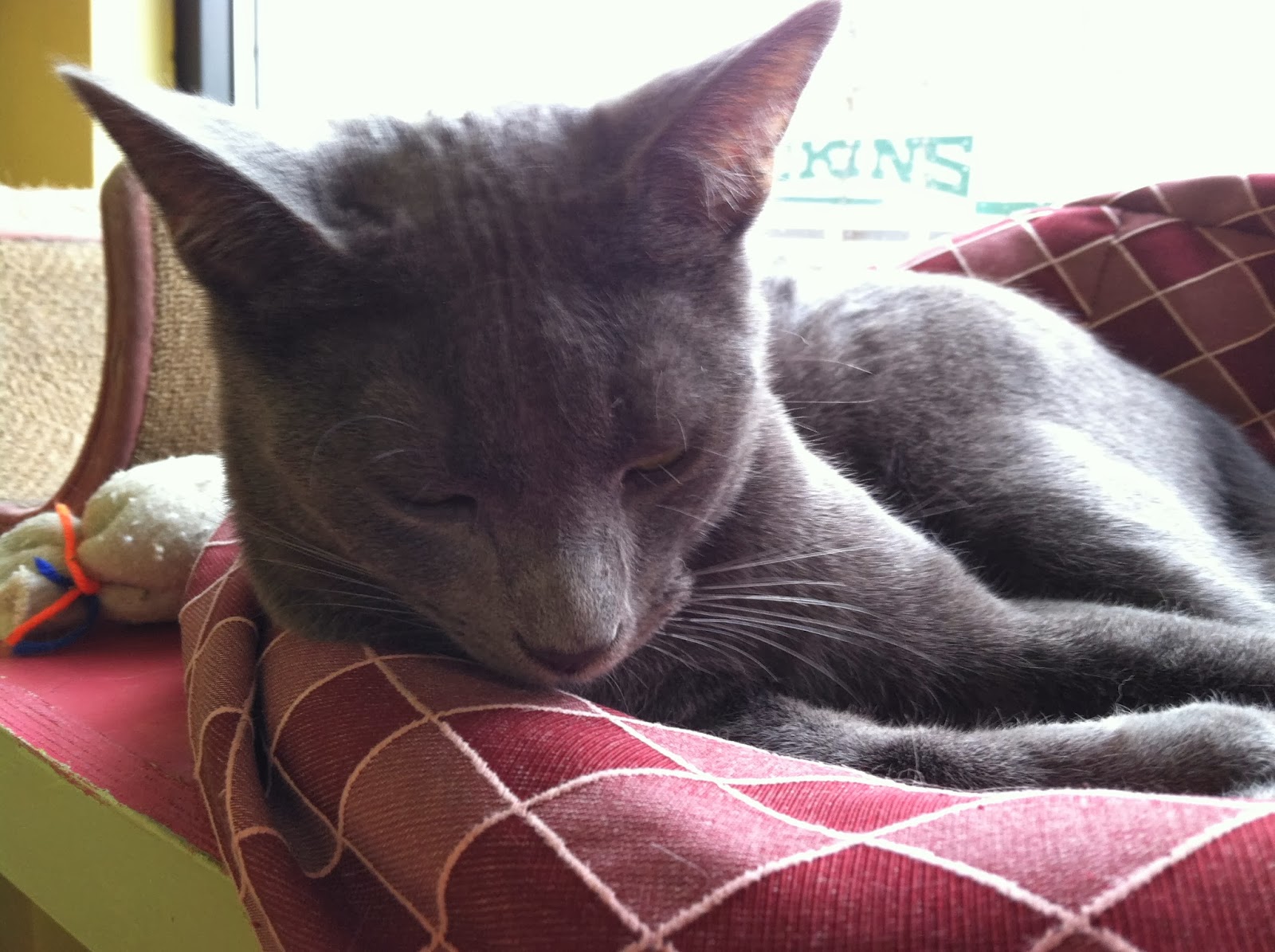 Above:  Teddy
﻿
His brother Teddy was more standoffish, but I found that he was comfortable when he got on a little perch and was facing out the window.  While he was there, I began to do some Reiki with him, and he was quite comfortable with that, so I was gradually able to move my hand til I had it near his lower back.  I kept it there, sending the energy for a while, and then did some TTouches with him there as well.  As long as he was facing away from me, he was ok with that.  I have found that sometimes when an animal is sensitive to being touched in an area such as the lower back, it is helpful to share Reiki in that area first, and later on they may be accepting of direct contact there. 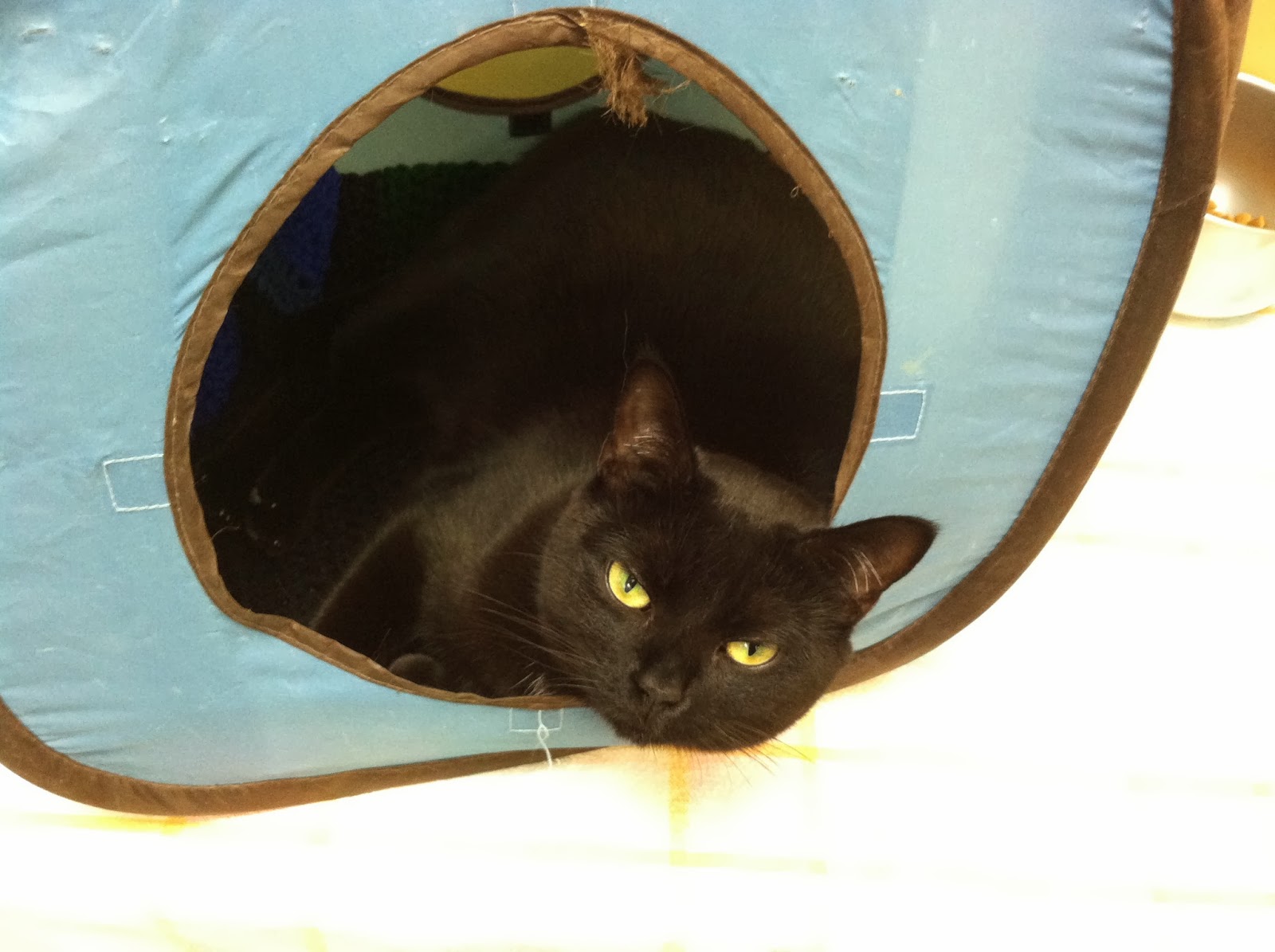 Above:  Ingrid
I was told that Ingrid generally would only allow one or two pets and then would swat.  Kerrie McKeon (one of the main keepers of the kitties at bideawee and cat expert extraodinaire.  Check out her website, http://catsleuth.com) said it seemed like someone played with her using their hands as toys, and that made a lot of sense.  I did a few TTouches with the back of my finger, actually the flat part of the fingernail, on her forehead, and she rubbed into it.  I did a little at a time with her, giving pauses, and by the second time visiting there was able to do a longer period of time with her. 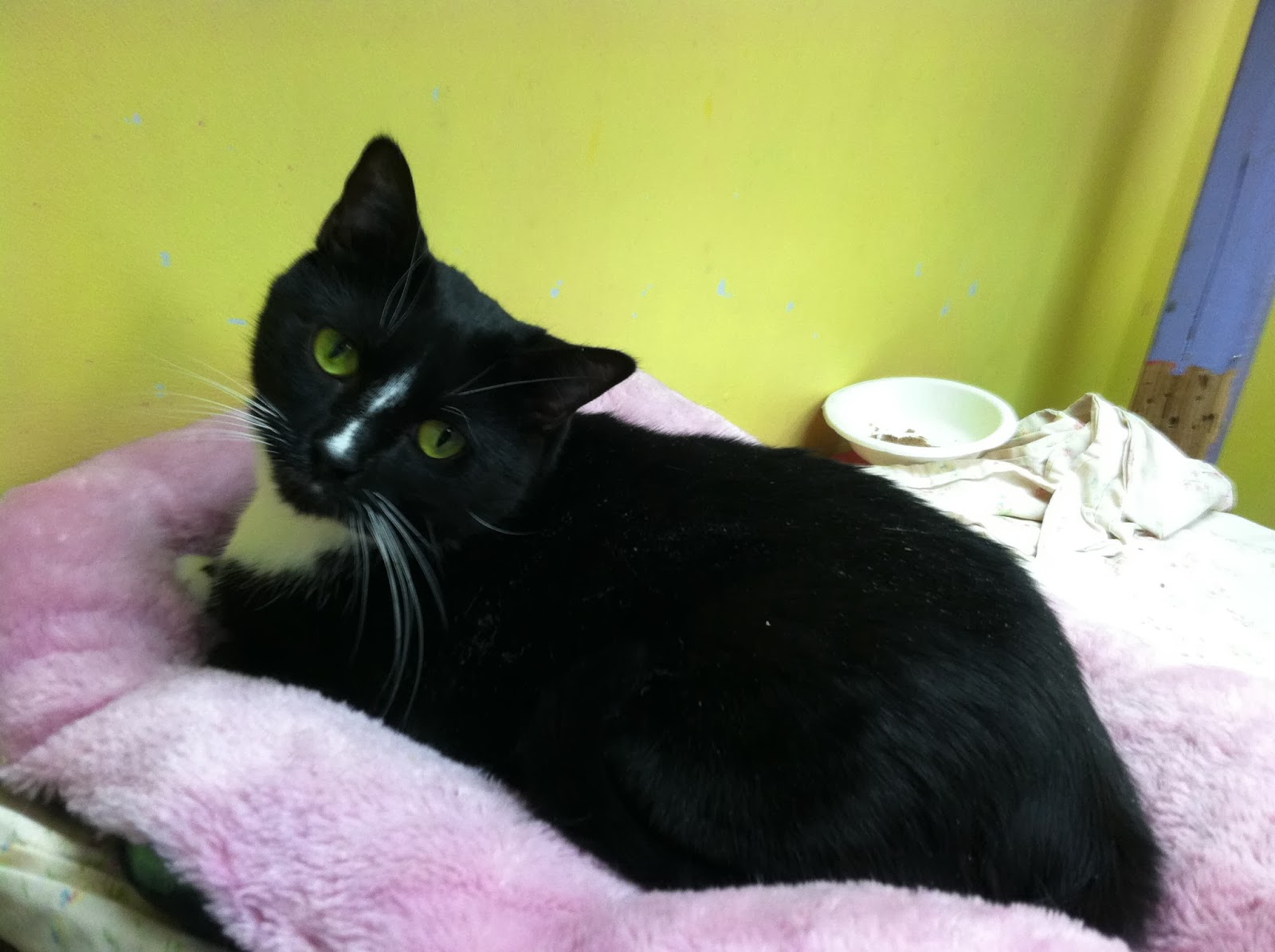 
Ebony is also very sweet, but as she could be a swatter, I used the paintbrush first.  She started pushing her head into the TTouches with the paintbrush, so after a bit I transitioned to using the back of my hand, mostly around the top of her head, alongside her cheeks and outside the mouth.  The next week when I worked with her I was delighted to see that there was no hint of swatting anymore when I was working with her, and she also began to come into my lap.  So I didn’t use the paintbrush anymore with her.  From then on, she was extremely friendly with me and didn’t swat.  I was careful, though to watch her body language, and if I was approaching her, I would use the back surface of a finger on her head, to see how she was, and if she wanted to continue, I would.  Otherwise I would let her be, and usually just let her come to me, which she does readily, usually sitting in my lap for a bit.
Ingrid similarly didn’t try to swat at me, so in subsequent sessions I would start carefully with the back of my finger with TTouches on her head area, and take it from there.


So, going back to the second session, Panda started walking around my legs and feet while I was working with Ebony, so I switched back to working with him again.  He went again on his cat bed and ended up getting very sleepy as I did little circular ttouches on his head with the back of my fingers.  In subsequent sessions, usually it would be both him and Ebony that came to me first, sometimes pawing each other a bit to try to be first to get attention.


I would sit on a bench in the resort and with Panda, I would pat the bench, and he started a whole routine of jumping up there when I patted there. I would do TTouches with him by my side, and a few sessions later, began to lift him from the bench to my lap.  I didn’t force him to stay, but just did a few TTouches with him there and let him jump down whenever he wanted to.  Ebony would follow a similar process except that she would come up in my lap on her own.  More and more of her very endearing personality comes out every time I see her.


With Teddy, I progressed in a very gradual, non-forceful way.  Initially, he was most comfortable being approached when he was sitting facing out the window.  But as time went by, he was very at ease being approached pretty much any place he was in the room – sometimes settling for a few moments, sometimes longer.
And as this progress continued, I was so delighted to hear from the dedicated staff and volunteers who work with the cats that they too were seeing a big change in all four cats in the resort, particularly with Teddy and Panda, as they had still been quite shy when I began working with them.


One day when I came in, I was told that Teddy was now comfortable being picked up and held, which was monumental!
These two sweet brothers remind me a great deal of my own feral cats, Natalia and Lulu.  Very sweet, gentle souls underneath their fear.  This type of personality really blossoms once the fear begins to subside and trust builds.  TTouch and Reiki are such gentle ways of connecting with animals – they help to teach the animal that you are there for them, that they are welcome to accept as much or as little contact as they choose, that you are with them in this moment to share the energy and the gentle touches with them.


So, the most lovely conclusion to this post is that when I arrived at Bideawee this week, I was told that Teddy and Panda had been adopted by a lovely couple.  My heart felt so happy for them that it brought a tear to my eye!  Especially when animals with whom I have experienced a big shift are adopted, it is like seeing your star pupils graduate.  I can just imagine them delightedly frolicking in their new home :)
Thank you for all those at bideawee who make it such a special place and help animals like these to find the loving home they so much deserve.
Posted by sarahsuricat at 3:35 PM