Teaching TTouch to Cat Rescuers: Relaxation for the Rescued (and the Rescuers!) 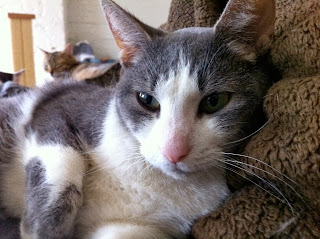 Above:  Sugar
Rafael and his girlfriend Loren rescue and TNR cats in both Brooklyn and Manhattan, so they are constantly in contact with frightened and abused cats, as well as older cats and cats with health issues.  They do a beautiful job of taking care of these cats (often with the help of Kitty Kind, find them homes), as well as taking great care of their own cats.  Rafael had contacted me after noticing a flier about my TTouch class at BARC Shelter, which had already passed.  I offered to come to them for a private lesson, which was even better, as it would give us a chance to work on their cats.
When I arrived, I entered into their lovely space which was very clean and completely set up for the cats' enjoyment, including a safe outdoor space where they can go to play and get fresh air.  I was greeted by some of the cats right away - Charlie, an older gentleman cat who has diabetes, Henry, a sweet blind cat, and a couple of lively teenage kitties.  A small kitten named Bella, who looked as if she had a wise-beyond-her-years quality to her, also trotted by - they told me she had been extremely sick and starving initially, and they had lovingly nursed her back to health. 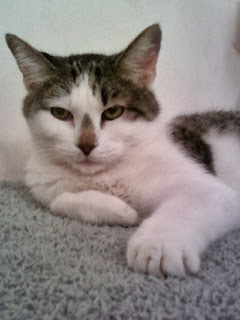 I began by showing Rafael and Loren some of the basic TTouches on Charlie.  I explained how TTouch can be of benefit to animals with health issues, as well as behavior issues, that it can bring a sense of balance and well-being to both the body and mind.
Charlie is a very sweet cat, but I could tell he is a very sensitive cat, so I went slowly, beginning at the front of his body, as he seemed more sensitive towards his back end.  It is important to give the cats little breaks as you work with them, so you can let them process and to help you determine if they are ready for more or need to have more of a break.
Rafael and Loren picked up the TTouches extremely well, both are naturals at it.  They both also have a quiet energy, which cats really respond to.  So, fairly soon into the session, they started trying some of the TTouches with the cats.  And here is when some magic really began... 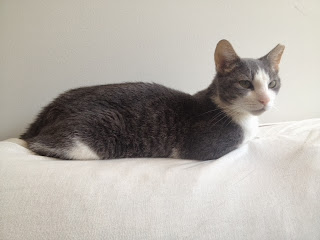 Above:  Sugar
Loren began working with Sugar, who I also did some TTouch and a little Reiki with as well. Sugar is generally a very nervous cat, always on edge, even when resting never quite seems at ease, and she also has IBD.  When I was sending Reiki to her, I felt a great deal of heat around the middle of her body (I had my hands on her side), which makes a lot of sense with her digestive issues.
Sugar's response to the TTouches was extraordinary.  It was as though TTouch was the perfect key to her relaxation.  As Loren continued to work with her, Sugar's eyes got relaxed and sleepy, and you could see her muscles and her whole presence soften and relax.  Rafael and Loren said that Sugar's usual mode is constant alert, and so to see her really let go like this was such a change!
I believe that the process of doing TTouch creates a calm energy in the environment, as well as directly affecting the individual animal who is being worked on, which helps them to feel a greater degree of safety.
Another wonderful surprise, one of the much more fearful cats, Seven, came to where we were working, which was dramatic enough in itself.  Then Rafael began working with him, and Seven visibly began to calm.  His eyes were still a bit in wide-open mode but he was comfortable staying there.  I was sitting right next to them.  At one point I moved a little closer and Seven became a bit concerned and moved away a bit, but then Rafael began working with Seven again, and he calmed again. The fact that he came where we were and remained there was a huge step for him, as he generally will hide when a new person comes in.
A bit later on I was working with Charlie again (Rafael had worked with him as well), and I could feel how much more relaxed he was.  His coat and skin even felt different, smooth, relaxed, and so when I tried some abalone TTouches (circular TTouches using the whole hand) down on his lower back, instead of feeling resistance or flinching, he relaxed right into them. 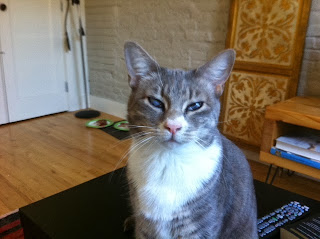 I also did some work during the session off and on with Henry, who is blind.  He is a dear, and I could feel him sensing the energy around him, which was so interesting.  Even when I was sitting a couple of feet away from him, he sensed exactly where I was, and knew exactly where he was going to make contact with me for a nice head butt :)  He was in a walking mood, so a little bit of TTouch at a time was good for him.  TTouch work helps with proprioception, which has to do with sensing where a body is in space, so can be of very real benefit to Henry, even though obviously he is doing a great job of this already.
I explained some of the more practical aspects of TTouch, such as how a slow progression incorporating circular TTouches and belly lifts can eventually lead to being able to pick a cat up (just a tiny bit off the ground at first), and how to combine the TTouches with very small lifts to help make this into an experience that is pleasant, instead of always associating being picked up with being put into a carrier to go to the vet!  The same concept can be applied when doing TTouches on the paws (eventually for toenail clipping) or mouth area (giving medication). TTouch can also help to bring more harmony, and if there are two cats who are not getting along, it can be helpful for two people to simultaneously do TTouches on the two cats in the same room (a distance apart, which can get closer over time), so that they can become accustomed to having something that feels good happen when they are in proximity to each other. 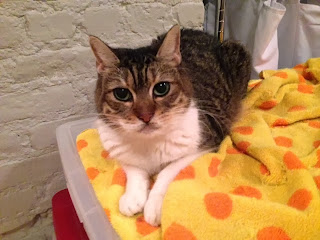 Above:  Clara
I did not meet Clara, as they had her in another room.  They didn't want to overwhelm her with meeting a new person.  She was abused, and so even though she comes to them for petting, she will flinch when they first touch her.  I told them that in time, TTouch should help her to be more relaxed in general, and eventually will help her react differently to touch and to stress. So I look forward to hearing from them about Clara's progress.
Meanwhile, back in the big room where we were working, by the end of the session, the cats seemed very relaxed, especially little Sugar.  It was beautiful to see her so at ease.
I was so energized after this session, especially knowing that Rafael and Loren will be able to help so many animals with the TTouches.
Rafael contacted me after the session, and said that later on, he had another session with Sugar, and they both had fallen asleep.  One of the many lovely things about TTouch is that it can bring relaxation to the person doing the TTouch as well as the animal :)
Thank you Rafael and Loren for all you do for the animals, and thank you to all the cats for being such wonderful creatures and teachers always.
(Thank you Rafael for the photographs for this blog post)
Posted by sarahsuricat at 3:08 PM