My Journey with Max: Comfort for Physical and Emotional Stress 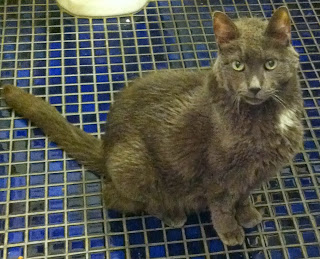 Max is a handsome, elegant 14 year old cat with a very big presence.  When I first went to see him, though, his big spirit was quite diminished, due to prolonged physical troubles - probable asthma and then a very serious chronic sinus condition which required a lot of testing and subsequent hospitalization, etc.

Max also has a lovely sister, Chloe, who has a separate tale to tell, so I will speak about her in a separate blog post.

Max's people, Debbie and Jonathan, are doing everything they can to help him.  After all that he had been through with the medical treatments and hospitalization, they wanted to help provide comfort for him in whatever way possible.  Both Reiki and TTouch are wonderful modalities for providing gentle comfort, both physically and emotionally.  They also can help the body to be more optimal balance, and can help stimulate the appetite.  Keeping a cat eating can often be a challenge in this type of situation, and is, of course, crucial to a cat's survival.

In the first appointment, he had just come home from the hospital with medication and a feeding tube.  I showed Debbie and Jonathan some of the basic TTouches, but I was very gentle and careful with Max, because his condition was very fragile, and I did not want to disturb the feeding tube.  I spent more of the appointment offering Reiki to Max, keeping my hands several feet away at first, then moving in a bit closer.

The first thing I felt upon offering Reiki to Max was a huge flood of gratitude which I felt from him.  The gratitude was to his people, for all of their love and care which they have given him.  It felt like beautiful ocean waves flowing from his heart to mine, filling up my heart with this powerful feeling.

I felt a very strong flow of Reiki from my hands, and kept picturing his nasal passages clear, and clear light and energy flowing from his nasal passages and all the way down his body, healing.  I still had my hands off his body, as the energy was so strong, and I didn't want to overwhelm him.  A few times I wasn't sure if I should stop and give him a break but then I felt a signal from him that he was ready to continue.  I felt him really pulling the energy into his body.

After we finished the session, he got up and went to his food dish and ate, which was a wonderful sight to see, and then went and laid down in his bed by the window, where he looked very comfortable.

Over the next sessions I saw steady progress with Max, both on a physical and emotional level.  The feeding tube was removed, his energy and appetite improved greatly, and Debbie and Jonathan said he was acting more like himself all the time.  I saw the light come back into his eyes and began to see and feel the strong being who he really is.  Prior to the hospitalization, he had been getting steroids on a regular basis for asthma-like symptoms, and after this recovery he was able to stay off the steroids for a good while.

Over time, I had to adjust the way that I worked with him.  He had gotten so much of his personality and energy back that it sometimes took some strategy to nudge him into a more relaxed mode.  But this was not a bad problem to have really!  Sometimes he would settle in several different places during the course of the session, but that was fine.

At that point, I also began working with his sister Chloe, who has her own health issues.  Often I will work with her first, to give him time to settle into a more relaxed state.  Usually by the time I finished working with Chloe, he would have settled into one of his cozy spaces.

One thing that Max's people had told me was that he was still spending a good deal of time sleeping in a quiet closet space in the back of the apartment, rather than hanging out with them, which he used to do before his hospitalization.  Jonathan had mentioned he wanted to try to get Max engaged in play again.  This was a great idea, as engaging Max in play would encourage him to become more engaged with them again altogether.

On my way to the next appointment, I stopped at Petco on the way and purchased a Cat Dancer toy.  Something told me this would be something he liked.  Indeed, it turned out that he used to LOVE to play with this toy when he was younger, and he got right into it when they started playing with him with it.  They also said that he had started coming up on their bed and sleeping with them again.

A couple of weeks ago, while I was working with Chloe in her usual place in the living room, Max came in and started lurking around.  I wasn't sure whether he wanted to take in some of the energy, or was a bit jealous I was working with his sister, or both.  There was a cat bed a few feet away from where we were working, and he started circling around there, looking like he may even settle there.

I was finishing up with Chloe, and so I quietly began walking towards Max when I had finished the session with her.  At first I thought he was going to lead me into the back part of the apartment, where he usually settles.  But instead, he came back into the living room, settling on a little cat track toy near the bed he had been near before.  A while after I had begun offering him Reiki, he then got up and gently settled into the cat bed, where he remained for the rest of the session.  I felt such peace from him!!

After I finished the session, Debbie and Jonathan told me that he had not been in that bed since he had gotten back from the hospital, which was 3-4 months ago now.  So this was great progress!  The living room is a place where Max used to spend much more time before the hospital, so this was great that he was gravitating back to this room.  He has been sleeping in that bed again since then, and hanging out other places in the living room that he used to enjoy.  This also means that he is spending more time comfortably hanging out with his people, instead of isolating himself.

Unfortunately, Max recently had another bout of sinus trouble, which resulted in a couple of more trips to the vet hospital (fortunately not having to stay overnight though).  He is now still on some medication, some of which will be long-term, but is feeling better again, and that has been within a pretty short time period, so that is good.  He seems strong, is eating pretty well, is getting back to playing again, and he is continuing to hang out in his places in the living room.

Max and Chloe have never gotten along with each other, and still growl at each other even after being together their whole 14 year old life.  I am hoping that over time, there might be a bit more harmony between them.  Reiki can often help that to happen.  It is encouraging that they are able to peacefully hang out in the living room together now - which is something that they have done in the past, but maybe there is a bit more of a shift that can happen.

In this week's session, I worked with Max first, back in his cozy space in the closet.  I felt a lot of energy especially coming from his heart chakra, which is interesting, as I feel like his heart has been progressively opening during our time working together, after having gone through so much with his hospitalization earlier in the year. 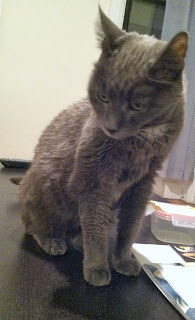 Above: Chloe
Then I went to work with Chloe.  She was on the couch, one of her favorite places.  We did part of the session there, and she seemed almost mesmerized by the energy.  Then she took a brief break to eat, then came up on the coffee table, another favorite place.  She stretched out on her side as I offered Reiki to her, really absorbing the energy. 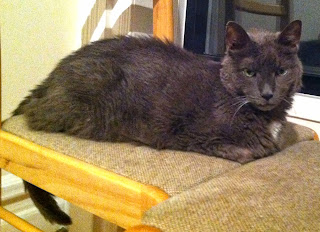 At this point, Max came slowly into the living room, looking like he was sneaking in, and then settled in one of his favorite places on a chair by the window.  I opened up my visualization of where I was offering the Reiki, picturing it as an expanding area of light, encompassing more and more of the room.  I felt the Reiki like a rain of light, gently falling and soothing.  Max stretched out on the chair, looking very cozy, and Chloe continued to be very relaxed on the coffee table.

It will be interesting to see if this is a continuing pattern, Max joining Chloe in the living room for Reiki.  It will be wonderful if the energy can help them to feel better being around each other, as well as to feel better individually.

Many thanks to Max and Chloe for again reminding me to really be in the moment with what is happening, and to keep an open mind because one never knows what can happen in those special moments!!  And thanks to Debbie and Jonathan for all the love and care they have for these lovely animals.  Look forward to seeing you soon, and sending positive thoughts for continued health and well-being of both these cats :) xo
Posted by sarahsuricat at 11:52 AM