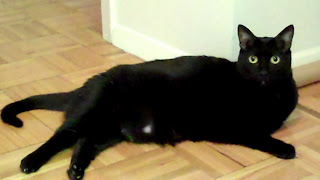 Yesterday I went to work with Krishna.  He is a beautiful, very smart cat who I have been working with off and on for quite a while.  He is fearful of people other than his guardians Rebecca and Tim, but over time my connection with him has gotten closer and closer.  I have worked with him with a combination of Reiki, TTouch, and Bach Flower remedies, and have also found that interacting with him through play is another non-threatening way to connect with him.
I hadn't seen him in a couple of months.  When I entered the apartment, he was in another room at first but Rebecca coaxed him out.  I lowered myself into a squatting type of position.  He slowly came up to me to sniff me.  I stayed very still, and if he tried to engage me in a stare, I softened my eyes and turned away a bit, so he wouldn't feel that I'm a threat.  He settled a short distance from me.
First I did some TTouches, just very gentle little circles and strokes, just a couple at a time, using a very soft paintbrush, similar to a long-handled makeup brush, that he had responded to well in the past few sessions.
Again, as he has before, he rolled around as though he had just had some catnip.  I have seen one or two other cats do this when they rub their face on the soft brush.  I'm not sure whether it is something about the smell, the texture, or what, but it seems to be comforting.  While he was rolling around, he seemed very unconcerned that he was within inches of me.  At a couple of points he stopped, his eyes getting very big and looking at me - and again, I softened my eyes and turned away so as not to lock into a stare.  This generally helps to avert him getting scared and meowing or swatting.
At that point, I began to offer him Reiki energy (of course, telling him silently that he need only take as much or as little energy as he would like) .  I was about a foot away, sitting on the floor.  As the energy began to flow, I felt him begin to pull it in, very strongly, as though he were pulling it into his body.  He relaxed, laying down with one of his rear legs stretched out, eventually laying his head down and going to sleep for a while.
After a long while, he got up, went to his bed, and curled up there.  I began to offer him Reiki again, and he was very calm, resting with his head down and his eyes closed.  I moved closer to him slowly and quietly. and began to do circular TTouches and strokes all around his head with the soft paintbrush.  He completely settled into the TTouches.
Just having this much contact with him really was a lot, but after a bit, I decided to nudge a bit further in a very gentle way, to see what could happen.  Little by little I moved my pinky finger next to where the brush was touching his skin, incorporating it into the TTouches, giving breaks every so often to allow him to process the work, and to observe what his reaction was.
He continued to be completely at ease, just as at ease as he was with the brush.  Then, little by little, I began to TTouch him directly with my hand without the paintbrush at all.
He remained completely relaxed, still with his head down, completely relaxing into it.  I had to continue to check in on myself too, to make sure I continued to be relaxed.  This is the most direct contact I have had with Krishna.  We felt completely in synch with each other.  I would pause every so often and take my hands off him, to see what his reaction was, and then start again.  It is really important to give breaks to the animal, and to give yourself a chance to feel what's happening and decide whether to stop or continue.  When I felt it was enough, I slowly moved my hands away and gently moved away from him.  At that point, he lifted his head up and looked at me, but not with a frozen, frightened stare - with a much softer, more relaxed look.
I was reminded once again that it is so important to let go of our expectations when we are working with an animal - to simply be in the moment with the animal ... and it is in that moment of connection that the most amazing things can happen...
Thank you Krishna - and I look forward to seeing you again this weekend :)
Posted by sarahsuricat at 10:33 AM