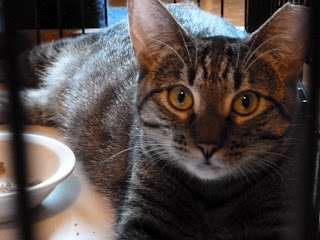 I haven't posted for quite a while, it has been an intense time, to say the least!  First was the adjustment to Garbanzo being gone, which has been huge, and of course I continue to miss him greatly.  I do feel him still with me in spirit, of course, and he is definitely guiding me in my next cat adventure, which began a few weeks ago.

This began sooner than I had expected, but sometimes life's twists and turns and momentum just have a pace all their own, and this adoption felt like it was just meant to be.
Emmylou (above) and Natalia (below), formerly known as Griffin and Samantha, arrived in December 2011 at BARC shelter as feral cats.  Emmylou could not be touched at first, and Natalia was frightened but would allow petting fairly soon.  They were both quite fearful. 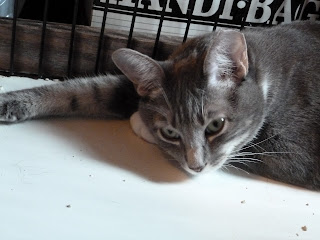 I have done some earlier blog posts about these kitties, particularly Emmylou, which you can find if you search my blog for feral.  I began with a feather with Emmylou, first stroking parallel to her whiskers and down her front legs, then eventually on her head and body, then working up to touching her directly with my hands.  I started with a feather with Natalia at first as well, but soon found she was comfortable being touched directly.
Over the past months, I worked a lot with these two, especially Emmylou, as she was more hesitant to be touched.   As they grew more comfortable, quite a few other volunteers were able to touch and pet them as well.  They are both quite gentle in nature, not aggressive at all, just timid.
When I brought these two home, I soon realized I would need to give these kitties a chance to acclimate to the apartment in a safe and gentle way.  I spoke to a couple of my friends who work a lot with feral cats and they kindly offered to lend me a kitty condo, which is a large cage with several levels, on wheels, so it can be moved around in the apartment.
This has turned out to be perfect, as the cats can be in an enclosed space larger than what they had at the shelter, with shelves that they can jump up and down on so they can get exercise.  And we can move the cage to different parts of thr apartment so that they can see them before going out to explore them.
I'm doing TTouch and Reiki with both cats every day, sometimes a very little bit at a time, other times in longer sessions.  I am also getting them to come to me by putting baby food on my finger, which they come and lick off.  As they got more comfortable with the baby food, I can pet or TTouch them as they are eating.
Often my partner and I just sit outside of the cage, speaking to them or to each other, so they get used to having us close to them.
I began playing with them in the cage more and more, using string toys and feather toys and the like, and as they have gotten more comfortable, they now play with each other very often as well.  It has been so lovely to see them become more active and engaged, as well as more friendly.  They often will play and tumble with each other on their own, looking like kittens!
And, the past week, we have done longer and longer play sessions with the cats outside of the cage, with the large screen door to the bedroom closed.  It is an absolute joy to see them tear around in the room and tumble and play.  And every day we are able to have more and more contact with them outside of the cage, though it will take a while to gain the same truat that they have when they are inside of the cage.  We also are using baby food to get them to come to us when they are outside of the cage, having them lick it off our fingers.  And each time I have them out of the cage, I am able to do a little more TTouch with them without them running away.
One of the lovely things about this slow and gradual acclimation is that now when they are out of the cage, they are not burrowing underneath or behind furniture, but stay out to play or rest, and go back into the cage when they want to.
Now that I've given you a hugely condensed version of what's been happening, I will try to do some more detailed ongoing blog posts to let you know what's going on as these sweet cats continue to become more acclimated...... It is such a pleasure to have them in my home,  and I feel that Garbanzo must be happy that I have taken in two ferals, being that he was feral himself :)
Posted by sarahsuricat at 4:01 PM