TTouch with a Feral Kitten at BARC Shelter 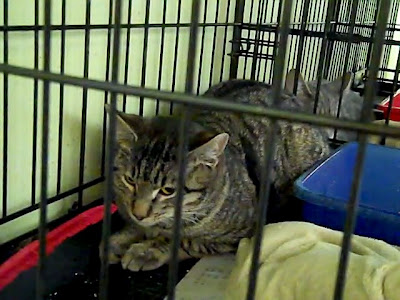 Recently, two "older" kittens (maybe 6 months old?) were brought into BARC shelter. They are really quite feral, and appeared terrified, hanging at the back of the cage. I started out by working with the more fearful of the two, who generally will loudly hiss and swat if you approach her (you can see her friend behind her in the above photo). As she was much more frightened than the other cat, I will focus on her in this blog post.
I used a very long feather, and began by not even touching her, but by stroking about an inch or so away from her whiskers, parallel to where the whiskers are, from where the whiskers meet the face to the tips of the whiskers, on one side, then the other. 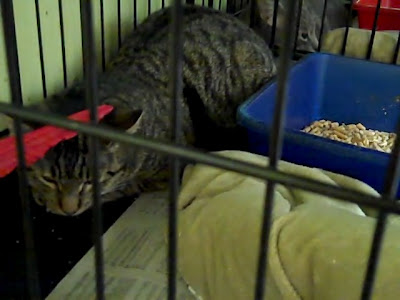 She began to calm as soon as I began to do this, settling down into her body and her eyes started to close a bit. Little by little, I progressed to lightly stroking the whiskers, then doing little circular TTouches on her cheeks, head, under her chin, and then on her body. 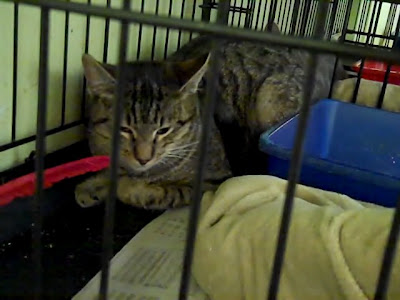 I went a little at a time, stopping along the way to give her breaks. After a few sessions, she still moved away at first but then settled into the feather TTouches. It is always important to really be 100% present and in the moment when working with animals, but even more so with very frightened animals. You need to watch their body language and sense what they are ready to do, and really let go of any agenda or preconceived notion of what you think should happen. This is for their well-being, but also is important for your own safety. 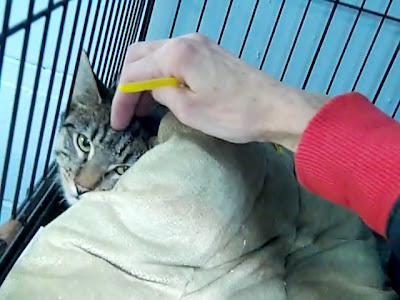 After a few sessions working with her this way, I decided to take the plunge and gradually worked my hand down the feather and began to do TTouch circles on her head with the back of the end of my finger. Initially she was at the back of the cage, and then what she did next was so interesting. 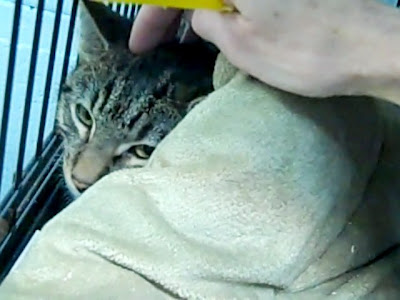 She figured out a way she felt more comfortable receiving the TTouch. She has a little pillow/bed in her cage, so she went under the bed along the edge of it, so I could still touch her but most of her body was under the bed. She stayed there and settled as I did TTouches on her head and a few strokes down the body, just using the back of my fingers. 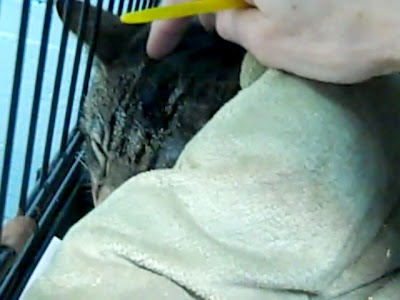 The next day I tried this with her, she did the same thing, going under the edge of the bed. But this time, she actually started to move forward, still was under the bed, but her head got closer and closer to where I was.

Thank you, little one, for being brave enough to trust me, and for reminding me once again of how important it is to just stay in the moment and do this work, what can happen surprises me all the time. xo
Posted by sarahsuricat at 2:40 PM