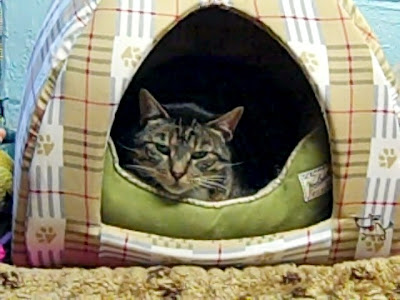 Hilda is an extremely shy kitty at BARC Shelter. Initially she was in a cage and had started to really come out of her shell, but a volunteer mistakenly thought it was ok to let her out of the cage. Then, since it was so impossible to catch her (not to mention she took became extremely bonded for a while with one of our resident cats who is loose in the shelter, Sly), it was decided to let her remain with the cats which are loose in the cat loft. This has suited her fine but it makes it more difficult to socialize with her, as she tends to run away when approached.
Recently she has enjoyed hanging out in the cat bed pictured above, so I decided to quietly approach her with a TTouch tool (in this case, I used a paintbrush) to see what would happen.
The cat bed is sitting on top of a mattress, so I sat on the mattress at a diagonal line several feet away from her, and, with my back to her and not staring at her, I moved closer til I was close enough to touch her with the paintbrush. Initially she hissed at me, but as I began to do some circular TTouches on her head, she began to relax. I kept it fairly short, gave her a break, then tried again.
Over the next sessions, she eventially stopped doing the initial hiss, and at times I was able to do some TTouches using my hand directly as well as doing touches and strokes with the paintbrush. I also at times was able to approach her when she was not sitting in the cat bed. And one day a new volunteer just sat down near her and was able to pet her! So all of this was really great progress.
Initially I was using a paintbrush with a rather stiff bristle. But when I was shopping for art supplies a couple of days ago, I came upon a really soft paintbrush, like a makeup brush with a long handle. I had a feeling this would be a great texture to try with Hilda. 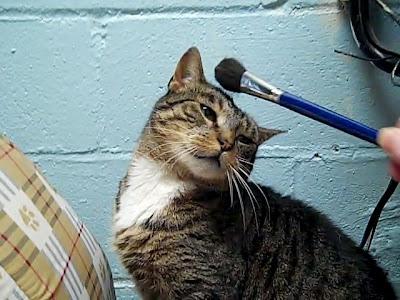 Sure enough, the soft texture was one she REALLY responded to, leaning into the brush and pushing against it, closing her eyes. 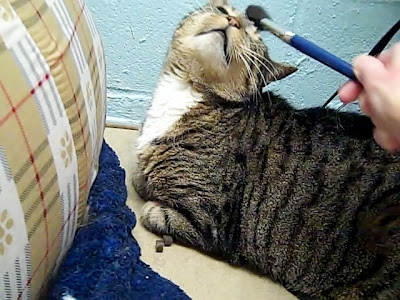 I did little circles and strokes with the brush, on the top of her head, the outside of her mouth, underneath her chin. Then I started to work in some strokes down the body. I did some TTouches directly with my hand as well, but since she was enjoying the soft brush so much, I mostly stayed with the brush. It was such a pleasure to see her truly relax, and for her to feel so comfortable connecting that way. I gave her several breaks, turning away from her for a few moments and then starting again. All the while I was doing this, I had my body position oriented sideways to her, which is a good position for working with cats, particularly very fearful ones. Facing them directly is usually way too intense for them and can be scary for them.
I still have to be very conscious of my energy and approach her very quietly, as if you approach her too fast, she will still run away, but I am sure over time she will become more and more comfortable connecting with people. Much love to you Hilda, and thank you for being so brave and open to trying something very different and new. See you soon...... 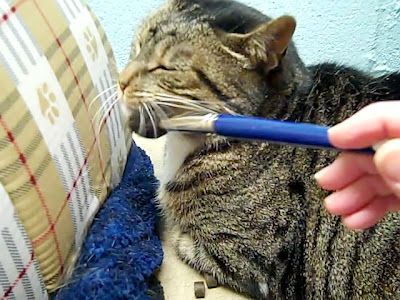 Posted by sarahsuricat at 12:13 PM