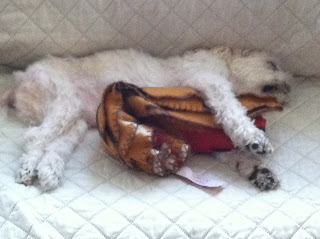 Mr. Ji is a dear senior dog I have been working with for some months now.  He has spinal stenosis, but he gets around really well in his dog cart, and it certainly never dampens his delightful personality.  It can give him discomfort, though, so the modalities I use can help to relieve some of that discomfort, and can give gentle suggestions to the body that help him to be in better balance.

When I started working with him today, he was restless, moving around, and it was hard for him to settle.  I did a bit of Debono moves work and a bit of TTouch with gentle hands-on, but he seemed to prefer that I work with him with hands off.  When he is in this restless mode, often it is best to share Reiki with him with hands-off first, and then see what else he may be ready to do.  If I follow his cues, I know I will find the way to help him.

His lovely person, Niseema, had put a toy in between his two front legs, which helped him to feel more at ease, but it seemed like he needed something more substantial there, so she ended up folding up a small blanket and putting it there instead, as you see in the photo.

It felt like a lot of his restless energy was in the upper part of the body, so I moved my hands slightly off his lower body.  I began to feel him start to be more grounded.

Then I began to connect with his inner light, and I silently told him that he has this light inside him all the time.  And I began to picture the light spreading through his body, and a very bright light surrounding his body as well.

All of a sudden I felt us completely connected - as though the energy from my hands, the energy running through his body like a river of light, the energy surrounding us - that we were one.  And he became very still, and so peaceful.

He was so comfortable that I decided to just leave my hands where they were for most of the rest of the session.  Towards the end, I did some gentle touches on his hind feet, barely even making contact, just to give some gentle awareness there.

When I finished the session, I tested his chakras with a pendulum and all of them were balanced.  I thanked him and thanked this work, feeling such gratitude.

Much love to Mr. Ji!!! Thank you for showing me and teaching me so much, and look forward to seeing you soon!
Posted by sarahsuricat at 1:27 PM