My Journey with Natalia and Lulu: Five Years Later 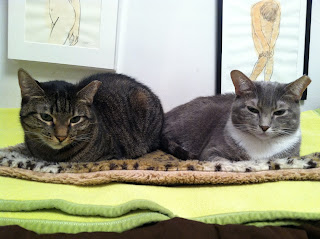 
Natalia and Lulu are my two beautiful, formerly-feral cats who I adopted from BARC Shelter in 2012.  They came into BARC Shelter in December of 2011 – so I have known them for five years now (they are probably about six years old).

When they first came in to BARC Shelter, I had no idea that some months later I would be bringing them home.  They had different names at the shelter, but to avoid confusion I am using the names I gave them.  At that time, I had my 18 year old cat Garbanzo, who would not tolerate any other cats.  They originally were brought in to be spayed and put back outside.  When that plan fell through, they continued to stay at the shelter.  The shelter owners were considering sending them to a sanctuary.  Clearly they were not used to human interaction at all. 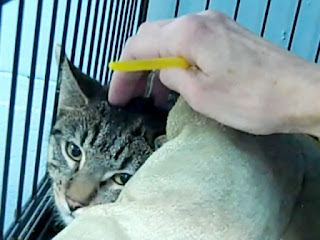 Of course I began working with them once it was clear they were staying at the shelter.  Lulu hid under her cat bed, and Natalia stayed at the back of the cage, but I could tell early-on that they were not aggressive in the least  just scared. 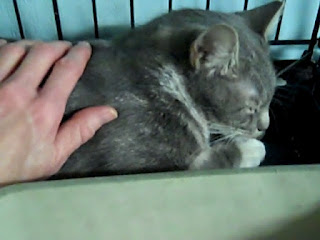 We have been on, and continue to be on, a truly amazing journey.  The process is so heart-opening, and so humbling.  It is a lesson in patience, and in letting go.  It is about really quieting my own being so that I can listen to what they are ready to do.  It is about keeping my mind open, about constantly trying new things with them, and about figuring out how to break things down into smaller and smaller steps until you are just at the place that feels ok for them. I also have a number of ways of connecting with the cats: TTouch, Reiki, play, clicker training, Debono Moves, treats, etc. If one thing is not working that particular day, I try something else.
And all of those small steps really do add up.  Back then, I didn’t know that I would eventually be able to pick up Lulu and give her a good snuggle and head rub, or that Natalia would want me to climb up the stairs to the bed with her for Reiki, giving head butts to me the whole way.  That they would come to me to seek affection.
Here is a photo of our Reiki routine.  Natalia and Lulu are always in the same configuration.  Most often Lulu will wait at the bottom of the stairs up to the bed.  She waits for my boyfriend to come into the room and tell her it's time for Reiki, but she starts running up the minute she hears him get up from his chair in the living room.  Such a funny routine!  Then she snuggles in next to me. 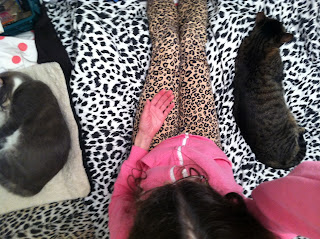 It is important to keep trying new things.  I think there is always progress that can be made when working with shy, fearful and feral cats.  And that it is always worthwhile to try.
.

A recent example:  Natalia has always tended to be head-shy.  So I generally will stroke her on the back first, as that is where she is most comfortable.  To help her get accustomed to being touched on the head, I would just do a couple of TTouches on the head, and go back to the body, where she is comfortable.  I also found that using the Zigzag TTouches on her head (they are usually done on the body), has been helpful.  Above and below are videos showing some of the ways I have been able to work with her to help her be more comfortable.


Lulu is more comfortable than Natalia with handling in general.  But brushing is something that she has limited patience with, so I am experimenting with different types of brushes to see what works for her.  And I am still continuing to make progress with her as far as handling goes as well. Just to give you an idea of how far she has come from her initial fearfulness/feralness, here is a video I made of her recently, showing some TTouches that are helpful for cats who overgroom:


Moving forward with being able to touch and handle a cat has practical applications as well as being able to feel a closer bond with your animal spiritually as well as physically.  For example, helping an animal to be comfortable being touched on the head, body and extremities such as paws and tail is really helpful if you have to give them medication, or if you need to look at a bump or scrape or the like, or clean the ears, etc.  We have not been able to get to nail clipping, and I think something such as giving eye drops would be really hard, but being able to handle the cats better and better has been a huge help, and we are continually progressing, so that is great!
And keep in mind progress does not always take place in a straight line.  Sometimes there will be a real breakthrough with something, and then the next day you are still back where you were before.  That can happen at times, but don't be discouraged.  Continue to meet the cat where they are that particular day, and find where they are comfortable.  From that place you can gently see what little step you may be able to take that day.

A month or so ago I needed to get Lulu in a carrier to get her to the vet, which I had thought would be such an impossible task.  It did take two of us to do it, but I think she knew we were trying to help her, and it did not end up being such a big deal as I thought it might be.  For me, the best thing I did in that moment was take a deep breath, calm myself, and act as if this was just going to happen. Taking a few seconds even, just to look inward and calm oneself, especially before doing something challenging with an animal, is so valuable. And even when we are getting ready just to try some TTouches or spend a quiet moment with our animals, it is really of value to check in with ourselves first and let go of our tensions and worries as best we can.
Animals have so much to teach us.  We just have to quiet ourselves and listen to what they have to say.  I learn from them every day.  And am continually reminded too, of how valuable it is to start each session with an open mind and heart, releasing expectations.  It is when you can truly be in the moment with the animals that the most amazing things can happen.
Love you Natalia and Lulu!  and look forward to continuing our adventures together every single day. xoxo

Posted by sarahsuricat at 3:17 PM