Sharing a Calm Space with BJ 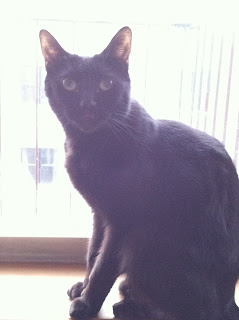 BJ is a beautiful black cat.  He lives with two wonderful people, Amy and Matthew, and kitty friend Ramona (Mona).  They recently moved, which is stressful for BJ, and he has been exhibiting signs of stress, including over-grooming.  This is something that happened with a previous move.  He is a very sensitive cat, and he needs some help in easing out of his anxiety. 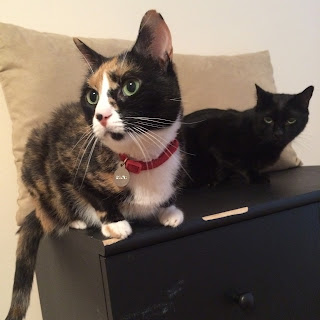 Mona and BJ
I started working with them about a month ago.  They had already been using a Thundershirt, which is great.  I showed them how to use a TTouch wrap, to have as an alternative to the Thundershirt.  I also showed them some basic TTouches, as TTouch is so helpful in calming the nervous system, and can help to remind him that he can feel calm. I have showed them some basic clicker training, as BJ is very food-motivated, and this activity can help him to be more focused and can distract him from the constant grooming. And I have encouraged them to meditate with BJ as well.  Perhaps because he is so sensitive, he has been very responsive to the Reiki sessions we have done. And so far he has been responsive when they have meditated with him.
He has been making progress, coming out into more of the space in the apartment and finding places where he enjoys relaxing, such as on the windowsill. And as of last week, he was grooming less, which is really good.

For the Reiki sessions, I just sit on the floor in a comfortable position with him in the room, and Amy and Matthew can sit quietly wherever they wish.  BJ is welcome to go wherever he pleases.  I am sharing the Reiki space with him, and it is his choice as to where he is comfortable receiving the energy.

In the first two sessions, he started out being very restless, but I just continued to let the energy flow, letting him know he was loved, he was safe, and he was welcome to take as much or little energy as he needed.  Both times he ended up settling into Amy's lap, and over some time stopped grooming and relaxed into a very peaceful sleeping position there.

The third session was a distant session, as both Amy and Matthew were out of town.  I felt a very strong connection, and as you can see in the picture below, my cat Natalia was sending her own good vibes to him from nearby.  My other cat, Lulu, was also present on the other side of me, enjoying the relaxing energy.  The photo near my hand is a photo of BJ, as that helps me in connecting with him. 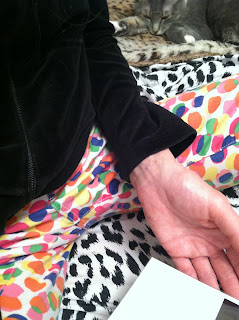 In the fourth session, Amy was not present. I shared with Matthew a meditation that I call the "healing bubble meditation", during which you create a space of healing and light, and invite the animal into the space.  As we did the meditation, BJ circled around Matthew, very interested in what was going on.  I know he could sense the calm energy around him.  And he looked at my lap as though he was thinking about sitting there, but not quite yet.
After that, I worked with BJ, and shortly after I began letting the energy flow, he went ahead and settle right on my lap.  He was not grooming for that entire time, was just absorbing the energy. As BJ is quite shy, that was a big show of trust on his part.
I felt him so peaceful and quiet, and it seemed like such a relief for him to feel such stillness.  And it seemed he was realizing that it was possible for him to feel this calmness.
I think the more often that he can be reminded of that feeling, the more easily he will be able to find it on his own.  So that is why TTouch and Reiki and meditation can be so helpful - to remind the body and mind that mental and physical peace is possible.
After a long while, he needed a break and went to go sit on an easy chair.  He started to groom himself.  I continued to let the energy flow, and he began to slowly calm down.  I very gradually began to move a bit closer to him, and followed my intuition to try a few TTouches with the back of one finger (flat part of fingernail) at a slow tempo.
I did just a few circular TTouches, and he stopped grooming.
Then he started up again a bit, and I did a few slow TTouches on his forehead with one finger.  I slowed down the TTouches as I went.  He stopped grooming and settled down.
I gave him breaks here and there as I continued working.  All the while I was letting the Reiki continue to flow.  I did some slow TTouches going down one side of his back, then the other with the back of my fingers with a snail's tail (after the circle and a quarter you pause, then release your hand back in the other direction a quarter circle).  The back of the fingers can feel more gentle and less invasive than the front surfaces, as there is less heat coming from the back of your hands.
BJ was getting very relaxed and sleepy by this point.  Sometimes I would just keep my hands still and let the Reiki flow, and other times I would be doing the TTouches with the Reiki flowing. Mona came over near where we were, as though she wanted to be a part of the energy.
Please see the video below for a demo of some of the TTouches I did with him (I made the video after the session, with my cat Lulu as the demo cat).


In last week's session, both Amy and Matthew were present.  I had spoken to them about positive visualization, and Amy said that they were focusing on that more.  And that things were going better in general with BJ.
Seeing an animal in a positive light can be so important.  When an animal has an ongoing issue, such as overgrooming, we can start to have a constant image of the animal overgrooming.  Instead, it is more useful to start seeing the animal as healed and whole - to start seeing him as strong, relaxed, and peaceful, for example.  I use a lot of visualization when I am working with an animal, and I did in the session that followed.
Again, in the beginning of the Reiki session, BJ was a bit restless, but before too long, he sat straight up on the arm of the couch (next to where Amy was sitting).
He sat there very still, as though he was sitting as still as he could to feel the energy.
I was seeing him as a much larger cat than he physically is.  I saw him strong and confident and larger than life. I connected with his inner light, and began to feel a connection between his inner light and the light that was surrounding him.  That it was all the same beautiful light.  He stayed in this still sitting position for a long, long time - most of the session.  It was not a stiff position though - it was a posture of just taking in the energy, and of being peaceful, and feeling what that peacefulness is. I could feel his inner beauty radiating.
At a couple of points, he started to do a few motions as though he would start grooming, and then he decided not to, and stayed still again.  A couple of times when he looked as though he was going to start grooming, Amy just touched him lightly and he became calm again.
Realizing, I don't have to do this, I can be peaceful.
Eventually, he settled into Amy's lap and got very peaceful there.  I slowly moved near him and was able to do some calming TTouches with him.  Hooray (I said that inside myself quietly!)!
Thank you BJ, Matthew, Amy, and Mona!  You are all doing a wonderful job. I look forward to seeing you all soon and to further work with BJ:)
Posted by sarahsuricat at 1:54 PM