Calming a 3-Cat Dynamic with TTouch, Reiki, Remedies and Wraps :) 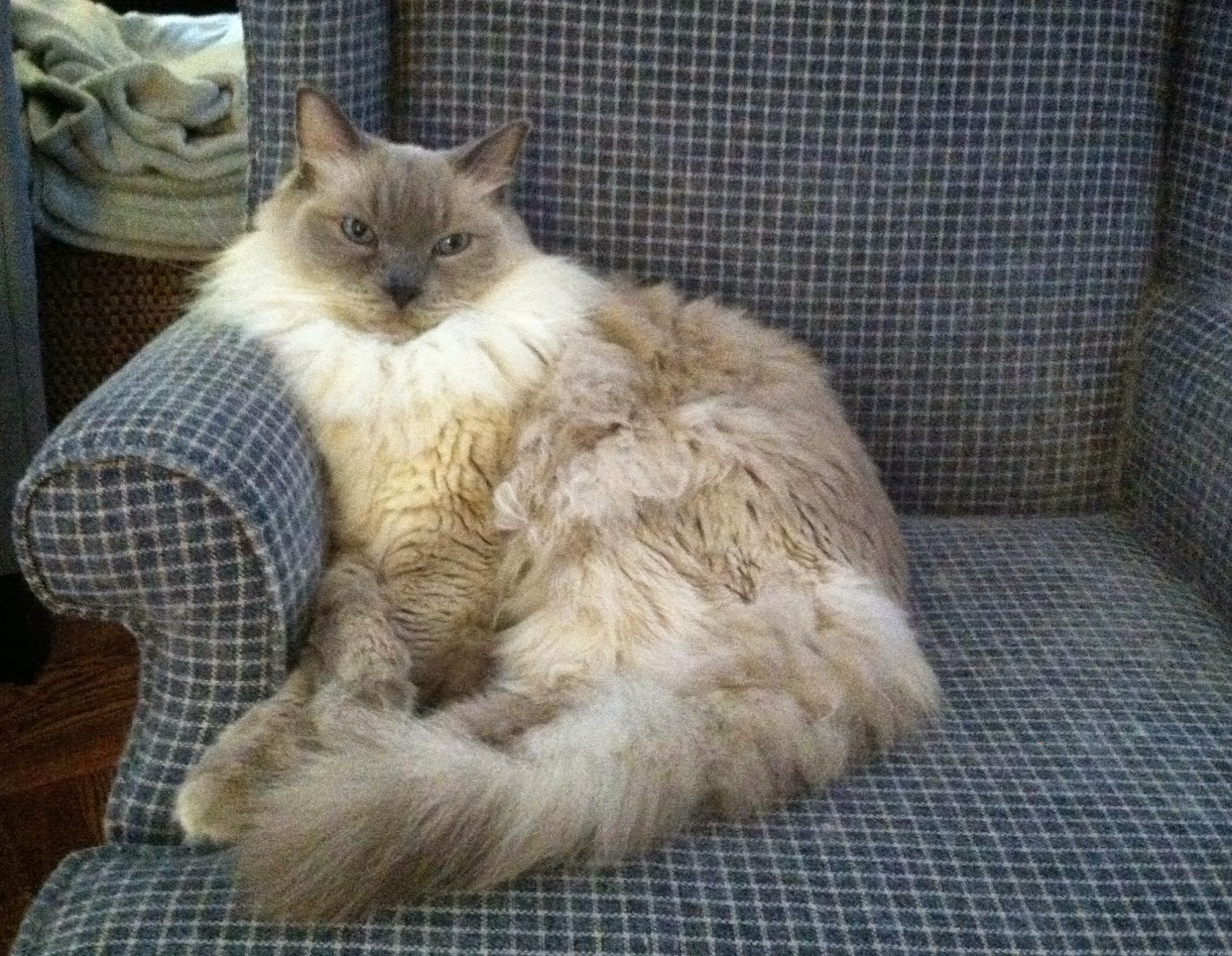 Above: Dr. Germanicus Higgenbottom (aka The Doctor, Higgs, Germanicus, Beans, etc)
Thank you Daniella for the rest of the photos in this post!

Daniella and Phil are a lovely couple who I met while volunteering at Bideawee.  One of their cats, Gus (a darling young black and white cat they had adopted from Bideawee – he had been found outside and eartipped but is definitely not feral), had been through the mill with health issues recently, including hospitalization and surgery.  And it seemed that the balance between their three cats had felt off ever since he got back.  The Doctor (officially named Dr. Germanicus Higgenbottom, he has several nicknames, including Higgs and Germanicus), an incredibly sweet 10 year old ragdoll, had been crying incessantly at night, and the other cats had been beating up on him.  Not only was the fact that this was happening bad for the cats, but of course it was bad for the people because they were unable to get any sleep.
Gus and Willoughby (a young tabby who had been rescued from the streets of London) are young cats and tend to be rambunctious in their play, which is overwhelming for the Doctor when they try to include him, as he is very passive and seems to feel attacked when this happened.
So I was asked to come and see if I could help to bring a bit more peacefulness to the atmosphere.  When I got there, Doctor was hiding behind the couch, as he is very shy, and the other two cats were out and about.  I showed Daniella some TTouches with Willoughby, as he seemed most receptive and so was a great demo cat.  He subsequently curled up and went into a deep sleep.  We eventually got Doctor seated between Daniella and me on the couch and I was able to do TTouches as well as some Reiki with him there.  Daniella was doing TTouches with him as well, and he got quite comfortable, which was really great to see, especially as he can be so shy with strangers.  Daniella was a natural at picking up the TTouches and she subsequently showed Phil how to do some of them so that they both can do them on the cats.
During that time, I could feel that Gus was feeling the Reiki and so sent some Reiki his way after working with the Doctor.  I felt a deep fatigue inside of him, that he was letting go and giving into this fatigue that felt like a result of going through all he went through in the course of his surgery and hospitalization.  He started nodding and going into a deep sleep.
After the appointment, I made a Bach Flower remedy in drops and spray for the Doctor.  The other cats were responding to the effects of the spray and becoming more relaxed as well.  Subsequently the night crying and craziness has really calmed down, thankfully for everyone!  I also made a remedy for Gus, which was about restoring his energy and vitality.  This also seemed to help, because the next time I saw Gus, he seemed so much more peppy and lively. 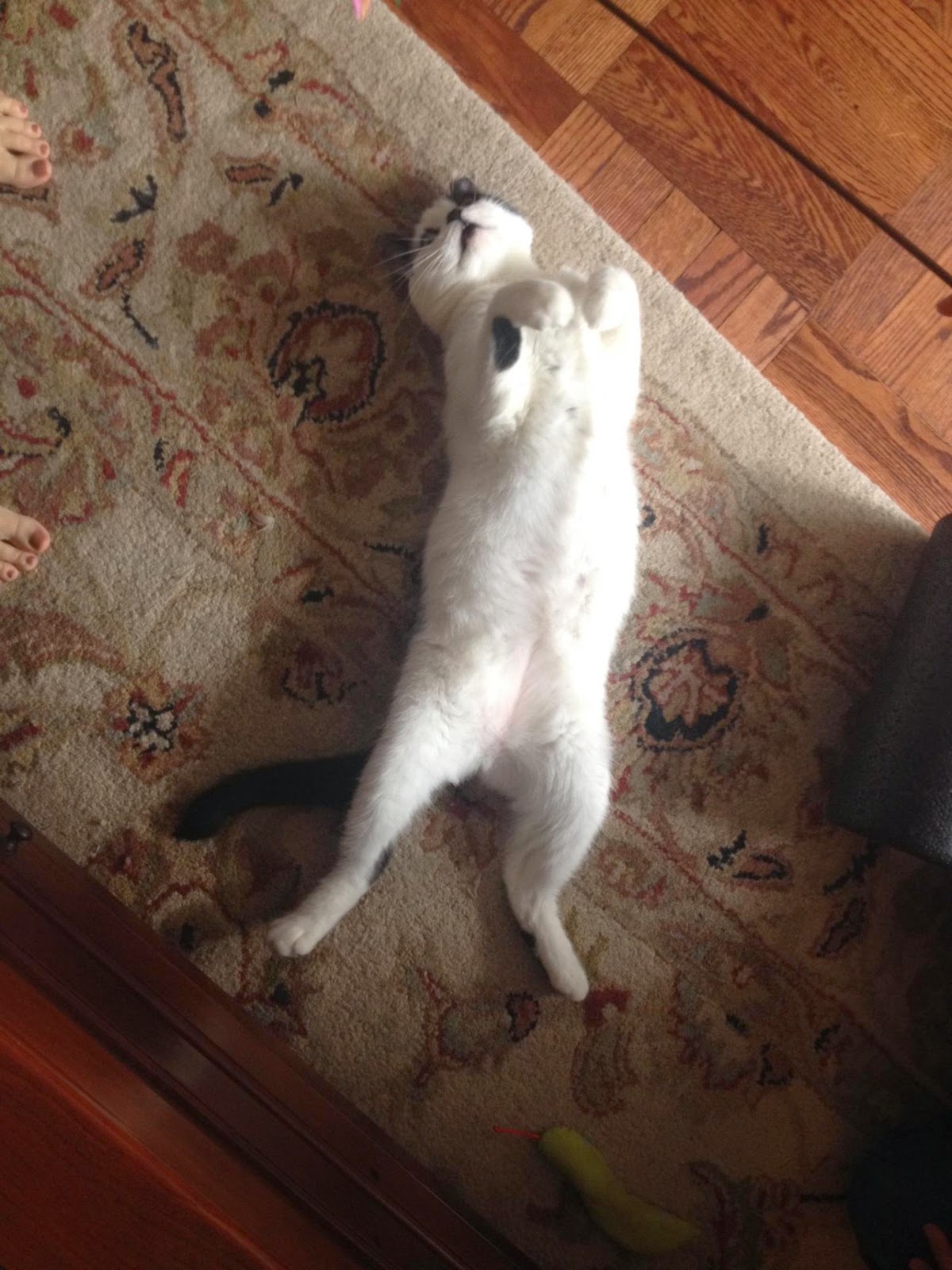 A recent photo of Gus, looking very relaxed and happy indeed!
In a couple of subsequent appointments, I primarily have worked with the Doctor, and Daniella and Phil have been continuing to give the remedies and TTouches to all the cats. Each cat seems to have their own favorite TTouches.
At the end of a recent appointment, I decided to try something that I had been hesitant about doing, but something told me to just give it a try:  a TTouch wrap!.  Many, if not most cats are resistant to having anything put on their body, so it can be a challenge to use a wrap with a cat, even if it is approached in a gentle, gradual way.  But some combinations of personality, etc combine with the wrap in just a perfect way, so it can be a good thing to try it.  I had thought of it particularly for the Doctor, who I thought might be receptive to it as he was used to having a harness put on him at times, and who could still use some additional calming and soothing, but thought it would be interesting to try with any of the cats if they were receptive to it.
Gus was nearby at that point and so I thought I would first give it a gentle try on him to see if he was open to it.  I have recently made some wraps from very soft, stretchy fleece from inexpensive winter scarves.  I TTouched Gus a bit and draped the wrap over his back.  That seemed to be ok.  Then I just gently put the wrap around his chest, holding it at the back.  He didn't seem to mind at all! So I proceeded to put a half wrap on him. (see wraps for cats demo below)

As most cats do when they first have a wrap on, Gus was still and seemed to be thinking about it, as though it was a very different feeling.  We got him moving, as sometimes animals get a bit "frozen" or even temporarily seem to lose control of their back legs, as it is such a different feeling.  He actually seemed to be very comfortable with it on! 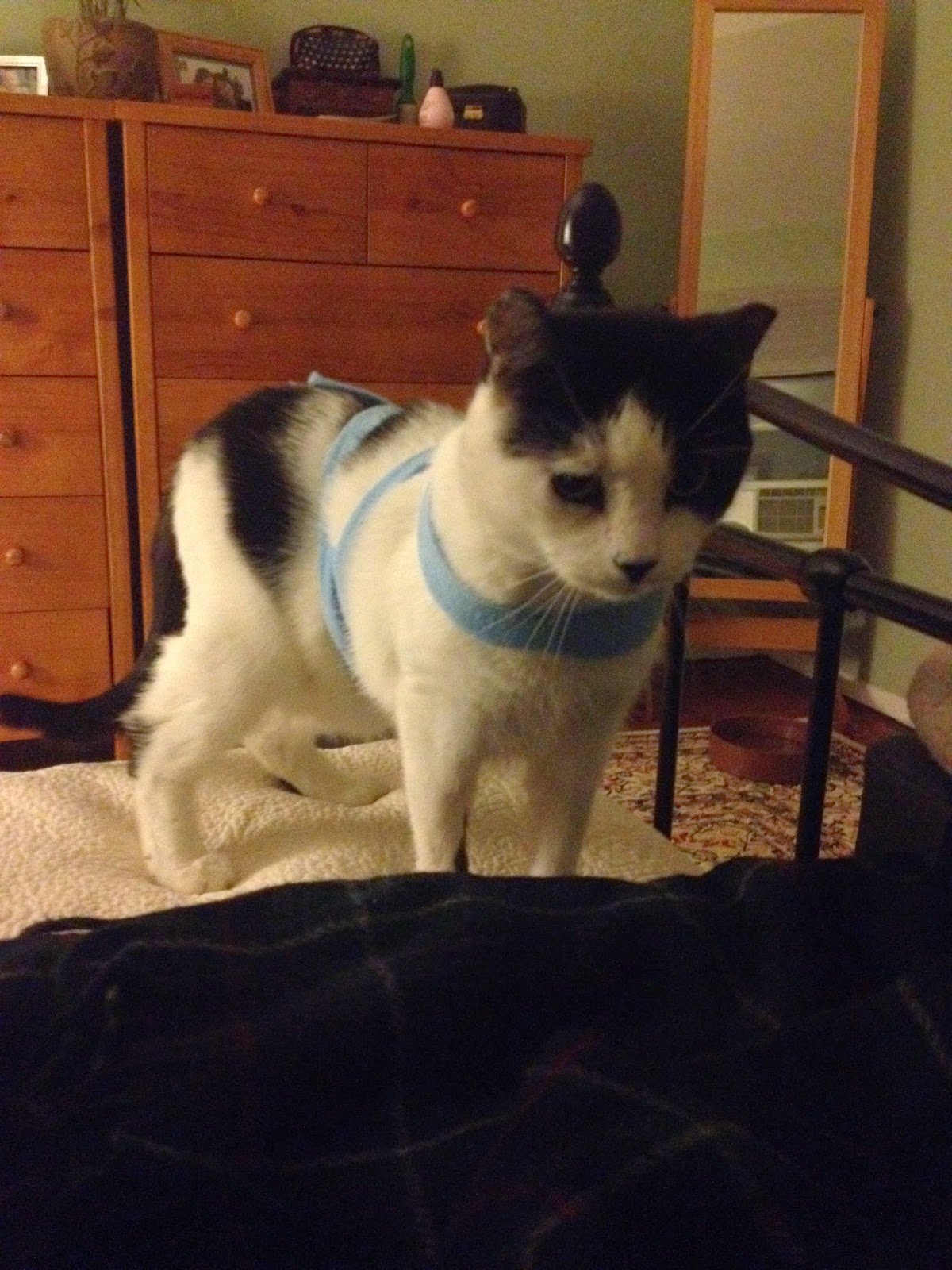 Gus in a TTouch Half-Wrap
Over the next day, Daniella tried the wrap on Willoughby and the Doctor, and they were very receptive to it as well.  So they have been regularly wrapping the cats. 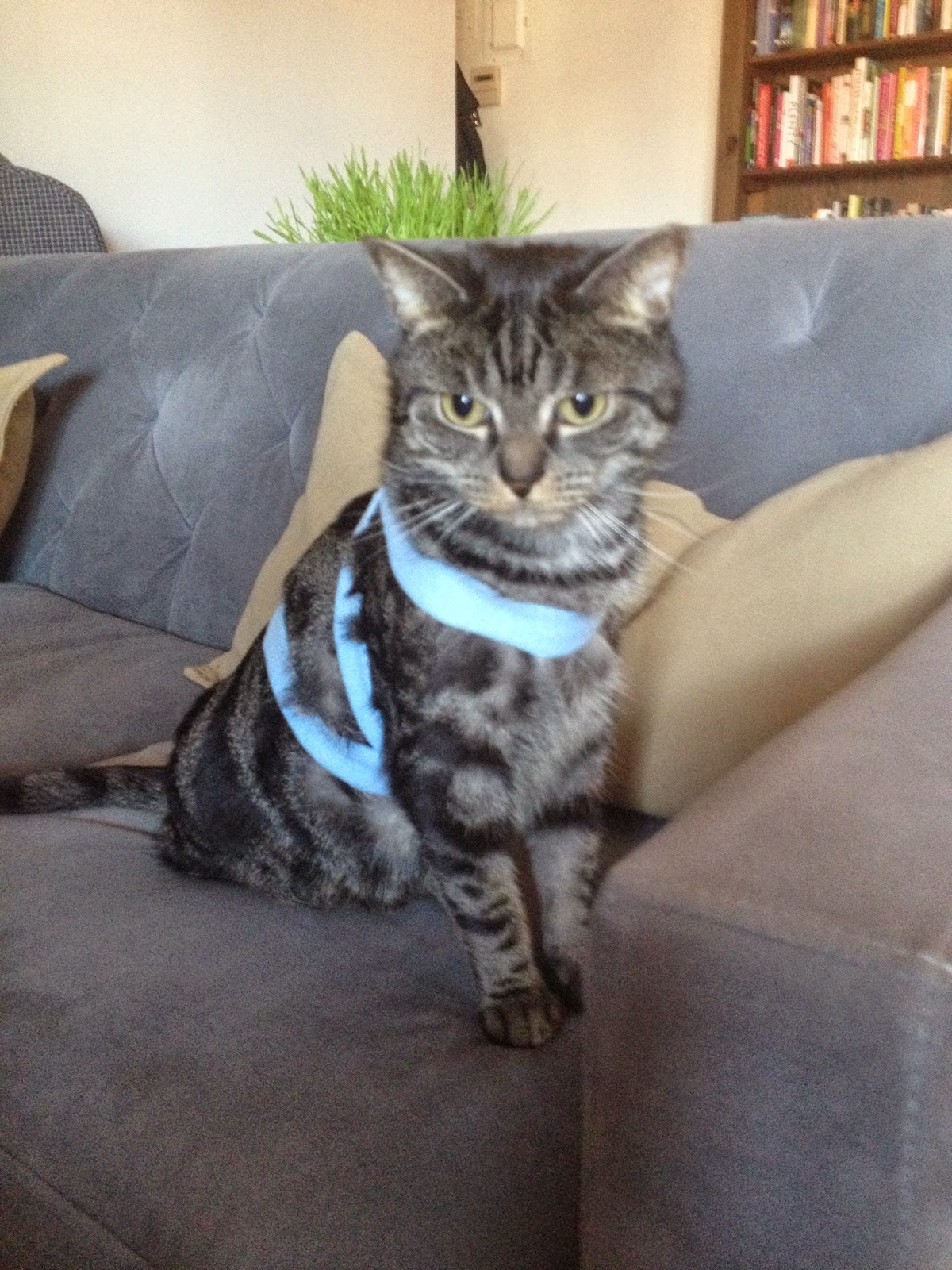 One day Daniella texted me that Willoughby was just sitting and purring away with the wrap on :) 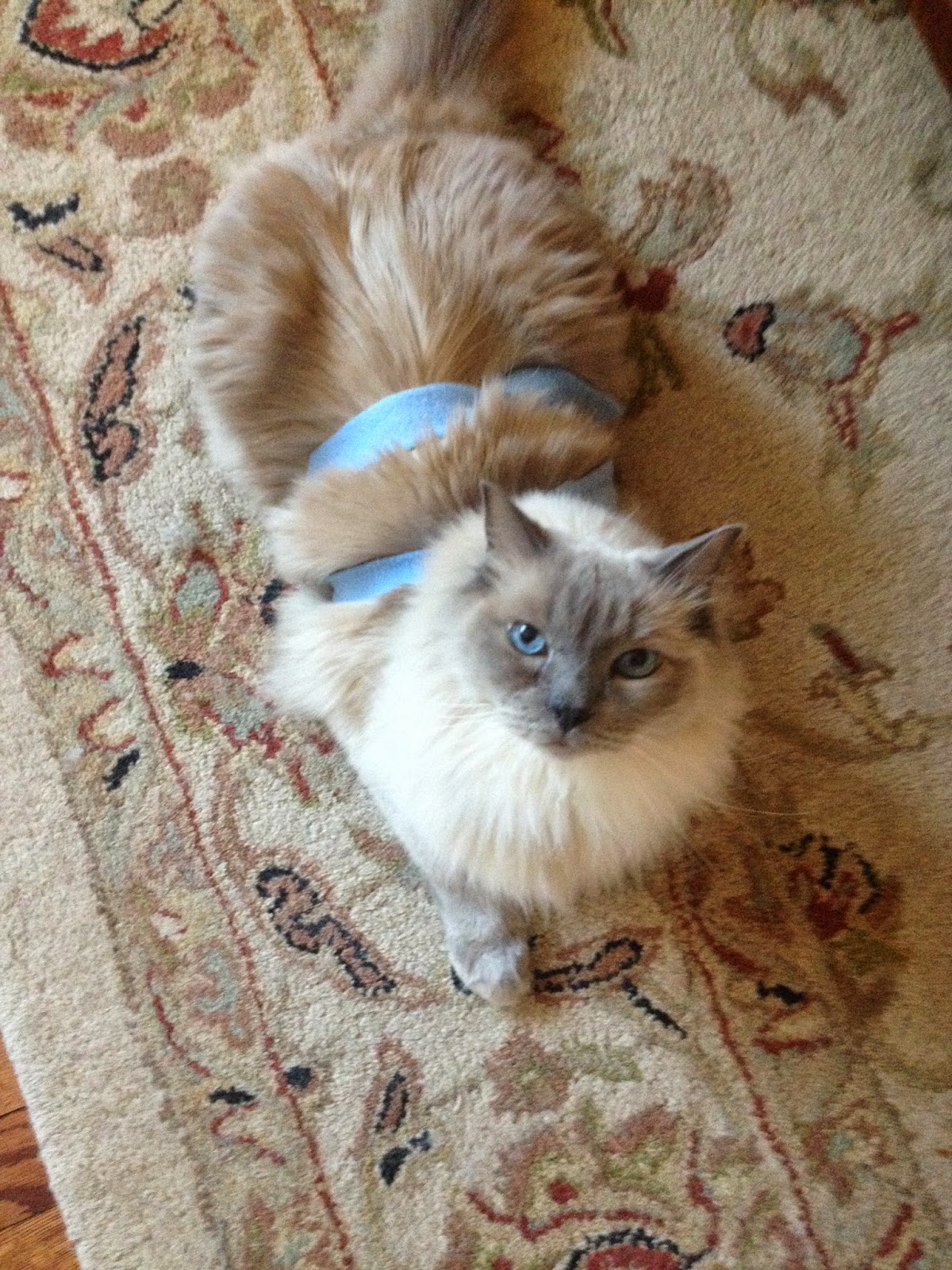 The Doctor with TTouch Half-Wrap.   It matches his lovely eyes!
I went just a few days ago to see the cats, after not having seen them for several weeks, and Daniella said that they were doing very well.  She said the Doctor is even standing up for himself sometimes if Willoughby or Gus try to start something with him.  So that is a very big deal.
Gus has been doing very well, which is a relief, after having been through so much, and Willoughby has been more affectionate than ever, wanting to cuddle in Daniella's lap as much as possible.  So that is all good news!
During the appointment, I spent most of the time with the Doctor.  Instead of staying in the bedroom, he came out in the living room and was quite content with me sitting right next to him for Reiki.  A couple of times he came over to me and rubbed his nose into my hand, which was so sweet! Each time I see him, he seems more comfortable around me, which is wonderful.
He completely settled into the Reiki energy, stretching out on his side, and for a little bit, Willoughby came over and laid on my shoe.  By the end of the session, there was a very quiet, calm energy in the room.  Willoughby was settled on Daniella's lap, Gus was napping on the cat tree, and after finishing with Doctor, he went and cuddled into his favorite chair (see photo at the top of the blog).
Great work everyone! So glad to see that there is more balance in the household, and look forward to seeing them all again soon.
Posted by sarahsuricat at 5:32 PM