Balance and Change in a Multi-Cat Household: Peanut, Rocky and Mushroom 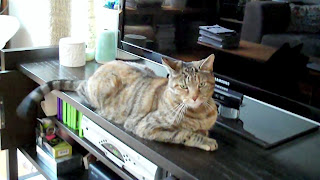 Above:  Peanut
Most cats find changes in the household difficult, so it often will take some strategizing, and sometimes approaching from a few different directions to help deal with the stresses of a new situation.  TTouch., Reiki and Bach Flower remedies can often be of great help in creating a more harmonious atmosphere.
Dominque called me because one of her cats, Peanut, is very stressed.  In the past months, a new cat and a new human baby have come into the household, so that is quite a lot of change.  The new kitty is a playful little youngster (about 4-5 months old) named Rocky.  Peanut had been attacking Rocky often, sometimes quite aggressively.  Peanut pretty much ignores the baby, but I'm sure there are many changes in the routine, etc. of the household as a result of the baby's presence that Peanut is feeling.
Peanut has also had an ongoing issue that has gone on for years with peeing and sometimes pooping outside of the box.  Dominque has had Peanut checked out regularly by the vet and it has been determined that there is not a medical issue causing this.  The vet had recently prescribed Prozac and when I first met with the gang, she said that so far the Prozac didn't seem to be having any effect on Peanut.
There is a third cat in the household, Mushroom. who has been in the household for some time (Peanut was the first, then Mushroom, then Rocky).  Mushroom and Peanut do tussle sometimes, but Dominique was not so worried about these fights, as they did not seem so serious or scary.
Dominique has been doing her best to try to help, and had tried a variety of things to try to calm the atmosphere and help the situation before she calle me, but nothing was working as well as she would like it to.  She was especially concerned about the ongoing attacks on Rocky by Peanut.  They had been keeping Rocky separate from Peanut for quite a while but were finding it harder and harder to do.  They do keep an eye on the cats so they can separate them if they start to fight.
I spent the first appointment doing TTouches with Peanut and showing Dominique how to do the TTouches so she would be able to do them as well.  Peanut was very receptive to the TTouches and Dominique picked them up very well.   Usually Reiki is flowing through my TTouches but sometimes I will stop the TTouches to just let the Reiki flow on its own, as I did during part of this appointment, and I felt that Peanut was able to reach an even deeper level of calm while doing this.  Peanut is a very intense cat, and as I felt the Reiki flowing, I felt her letting go in a very deep way, as though she had been holding some of this tension for quite a while.  It was lovely to see her stretch out and really relax.
We also tried the Thundershirt with Peanut.  I don't suggest the Thundershirt for every cat, as some cats are so stressed by having the shirt put on that it is not worth it.  Cats are not used to having clothing put on their bodies.  But Peanut was very cooperative, and was calmed by the Thundershirt.  She did temporarily seem to lose control of her back legs, probably because this was such a new feeling for her.  It is good to get the cat moving by offering treats, etc, so it doesn't feel frozen when the Thundershirt is on, especially for the first time.  And it is also good to introduce the shirt in steps, if possible - first you can offer a treat to the cat on the shirt, then drape it over the back of the cat, then wrap it part way around them, then all the way around.  Dominique decided to keep the Thundershirt and continue to use it with Peanut.
For subsequent sessions, we decided to focus on Reiki, and Dominique could work with Peanut and the gang with TTouches on her own.  I suggested that she and her husband simultaneously work on two cats at a time, especially Peanut and Rocky.  I also made Bach Flower Remedies for all three cats, to help to encourage more harmony in the dynamics between the three cats.

After the first Reiki appointment, Dominique said things were getting better, Peanut was fighting with Rocky less, peeing somewhat less too.  But the peeing has been going on for a very long time, so I would expect a long-time pattern of behavior to take longer to subside.
In addition to what we were already doing, I explained to Dominique the importance of positive visualization.  When our pets get into an unwanted pattern of behavior, we most often keep picturing that behavior, instead of the preferred behavior.  In this case, some positive images could be seeing Peanut and Rocky playing or sleeping near each other peacefully, or Peanut peeing in the litter box .
During the second Reiki session, I began to send Reiki to Peanut when she was on the floor, then Dominique brought Peanut up on the couch.  Peanut then began to really settle into the Reiki.  At one point Dominique left the room with the baby.  I was not sure how Peanut would react to this, but she continued to settle even further into the Reiki energy, stretching out on her side.  She fell asleep, then turned over on other side, placing body in my hands.  Initially she had been hesitant for me to have my hands directly on her, as the energy can be very intense, but once she began to relax, she was completely comfortable with my hands resting on her body lightly.  Peanut is a very intense cat, so it was so sweet to see her really let go.  Almost exactly an hour later, Peanut just stood up and very gracefully walked away, as if to say she was done with the session. 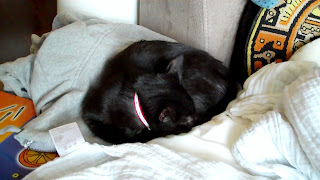 Above:  Rocky
While I was offering Reiki to Peanut, I didn't see what was going on behind my back.  After Peanut got up, I realized that Rocky was asleep on the other side of me, and Mushroom was also napping. 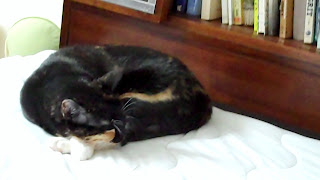 Above:  Mushroom
At some point while I was working with Peanut, Mushroom had started to meow to ask to go out in the back yard, but then had quieted down as the Reiki session continued.  And it was lovely to see that Rocky was sleeping peacefully in such close proximity to Peanut.
The following week, Dominique said that things were getting better in general.  Peanut was being nicer to Rocky. She said she was no longer afraid was that Peanut was going to hurt Rocky, and that Rocky wasn't terrified of Peanut any more.  I was so glad to hear this, as this was a substantial positive shift in a short time.  What she said to me also helped confirm to me that the Bach Flower remedies were most likely helping the shift in this dynamic, as I had taken into consideration Rocky's fear of Peanut as well as Peanut's reactive behavior towards Rocky when making the remedies (and, of course, Mushroom's issues as well when making her remedy).
There was a time while I was working with the cats in this session when Peanut briefly went after Rocky, but this time Rocky had started it, swatting at Peanut’s switching tail.
During this session, Peanut settled into hands-on reiki for about 25 minutes.  Then she got up to wander around a bit.  Then she settled into the Reiki just for a short bit, then would walk away, then settle for a bit more, then walk away.  This time Dominique had left the room but, unlike the other time, I think Peanut may have been wondering what she was up to in the other room. I thought perhaps she needed a break, and needed to feel that I wasn't forcing the energy on her, so I decided at that point to let her wander where she chose to go and work with Rocky for a while.  Peanut went downstairs, and Rocky settled right into the Reiki and curled up for a nap.  Suddenly I noticed Peanut had come back into the room, so I just started sending her Reiki from where I was.  Cats are very sensitive, so it is often most beneficial to start sending the Reiki energy from a distance.
After a while, Peanut began to settle several feet from where I was sitting.  As I continued to send her Reiki, always telling her she could take as much or as little as she wanted, she settled down more and more, stretched out and laid her head down.  By  the time I finished the session, again all three cats and the human baby were all relaxed and very quiet.
Reiki can really affect the whole atmosphere, even when you are focusing on sending it to one being.  And that is always a good thing!!  And it is very important to remember to be patient and sensitive to what an animal is ready to do, as that can so often change from moment to moment or session to session.
All in all, I think wonderful progress is being made in the household so thank you Peanut, Dominique and the rest of the gang for your love, trust and cooperation in the adventure of trying new things.  I look forward to seeing you soon.
Posted by sarahsuricat at 5:20 PM