Emmylou's New Adventure: A Gentle Way to Introduce a Cat to Being Picked Up 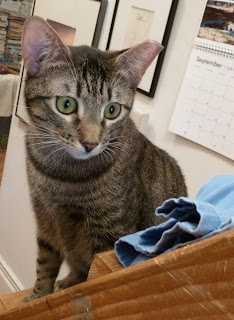 Emmylou is one of the two wonderful feral cats who I adopted from BARC shelter in mid-July.  We have been getting them acclimated to the apartment, and to us, very gently and gradually, and they are doing great!
We started them out in a large kitty condo (multilevel cage on wheels) and now they are mostly out of the condo.  Emmylou is more comfortable being touched out of the cage than Natalia, so we are respecting where they each are and nudging each one along at their own pace.
I wanted to share what I have been doing with Emmylou, which is a very gradual sequence in which eventually you can pick the cat up.
With both cats, we are using baby food to help with socialization.  You let the cat lick baby food off your finger, which is a great way to get the cat used to coming to you and being touched.  After a while you can pet or TTouch the cat while she is licking the food off your finger.  With Emmylou I found that after a while, I could do little TTouch belly lifts while she was licking the food off.  Actually it was sort of a modified belly lift, combining little circular TTouches, strokes and a little bit of a lift, all done fairly quickly as she licked the food off my finger.
Now for the next part of the process.  When I come into the bedroom, Emmylou most often comes up to me, rubbing against me, and I do little abalone, lying llama or llama TTouches on her sides.  To add to this, I would at times put both hands under her stomach and just lift up a bit, not lifting her off the ground at first.  Little by little, I would just put both hands under her stomach and lift her maybe an inch off the ground, once or twice and then just let her go.  This way, the lifting just becomes part of a TTouch or petting ritual and doesn't seem like a big deal.  Gradually I have been able to lift her further and further up off the ground.
I'm not at the point of lifting her all the way up to my body yet, but at this point I am able to lift her a couple of feet off the ground at least, which is great progress, and the only time she has had a reaction of any kind is if I try to do it too many times, and even then, she just sort of turns her head around to me as if to tell me that's enough!
Thank you Emmylou, you are doing great! and I'm sure your sister Natalia will be along with this in due course.
Posted by sarahsuricat at 1:54 PM