Connecting with Krishna, Closer and Closer 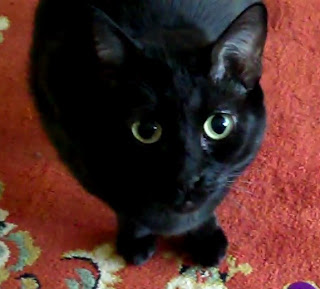 When I am working with animals, I always try to be sensitive to what they are comfortable with, and work from there.  There are times when it is good to give a little nudge so that they can try something new, but it is good to first find what makes them feel safe and at ease, rather than having a pre-conceived notion of what you would like to have happen.  What happened today may seem rather subtle to the reader, but for this cat I believe it was a huge step.
Today I went to work with Krishna, a stunning black kitty who is generally fearful of those other than his human caretakers, particularly his human "mommy" Rebecca.  However, over the time I have worked with him, we have developed a lovely connection.  He is still very shy though, so I have to be very sensitive to what he is comfortable with at any given moment.
I hadn't seen him in a while, and, as I always try to do, I began sending him Reiki energy as I was on my way there, feeling the connection with him and picturing him responding in a positive way.
When I arrived, he came right up to me.  I slowly went down on a knee to be closer to his level, and he put his nose right on my hand.  The least movement can startle him, so I stayed very still, speaking to him in a very calm, soft voice, telling him I had missed him so much and was so happy to see him. This was the boldest greeting that I have ever received from him.  I feel so especially honored when such a shy kitty feels comfortable enough to let down their guard to connect with me.
Since our last appointment, Rebecca and Krishna had a session with my friend and colleague, Eileen Garfinkel (http://dreamsofamelia.com), who is a fantastic animal communicator.  One of the things Eileen had picked up from Krishna was that he would like Rebecca to let go of what her expectations of him were.  And it had seemed that often I have been able to achieve a closer connection with Krishna when she is not present - possibly he felt some pressure from her or maybe just was more interested in connecting with her than with me.  So we decided it would be beneficial for her to leave the apartment for at least half the session.
After she left, I sat down a few feet away from Krishna, sending him Reiki all the while.  I brought out a very soft paintbrush that he had responded to in the past, and, as he had done previously, he immediately sniffed it and then began rolling around, rubbing himself against it.  I was not even holding on to the handle of the brush, just letting him experience the brush.  In doing this, he was practically touching me, and suddenly he got scared and and hissed and swatted me and ran way from me for a minute.
But it was just a moment for him of being scared.  He didn't run in the bedroom to hide, which is where he will go if he is very afraid.  Instead he remained in the living room, and got in his cat bed, which feels like a safe place.  I went and sat on the couch near where he was, and continued to send him Reiki energy.  I could see him start to relax, his eyes getting a bit droopy.  After a while, I sat down on the floor near him and got a bit closer.  He relaxed more and more, came out of the bed and began getting closer.  When I put out the soft brush again, he rubbed against it and rolled on his back, very comfortable and looking right at me.  So sweet!  I resisted the temptation to try to hold the other end of the brush and touch him, I just wanted him to be cozy being near me.  After this, he laid down near me and, as I continued to send Reiki, he started to lay down and put his head down.
Just a few moments after this, Rebecca returned and sat on the floor near where we were.  Krishna wanted to interact with her, so they did for a little bit, then she stopped and he came over near where I was again.  I was continually sending Reiki during this time, so again, he began to get comfortable.  I did try touching him with a couple of different paintbrushes, but I could see by his reaction that the best thing to do for this session was to continue with the Reiki energy and see what could happen.  I tried to very much keep in mind what Eileen had said about allowing Krishna to be who he was and not push him too much.  He got more and more calm and ended up laying down just inches away from me, actually facing away from me. 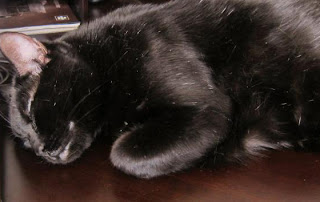 This felt like wonderful progress - first of all, it was amazing how close he was to me and had his guard completely down.  Also, when he is nervous, he faces me direectly and stares with huge open eyes at me, so the fact that he was comfortable facing away from me was interesting as well.  We stayed this way for quite a while, and I continued to send Reiki to him, imagining the energy relaxing him, filling him with light, releasing any worries from the past or present.  I could feel him pulling the energy from my hands.
Sometimes when we can really let go of our expectations are when these breakthrough moments are truly able to happen.
After I ended our Reiki session and slowly stood up, Krishna was looking at me, but not with a wide-eyed fearful look - much more of a centered, grounded, relaxed presence.  It was lovely to see him feeling so at ease.
Thank you so much Krishna - you teach me every time I work with you.  Look forward to seeing you soon...
Posted by sarahsuricat at 12:57 PM