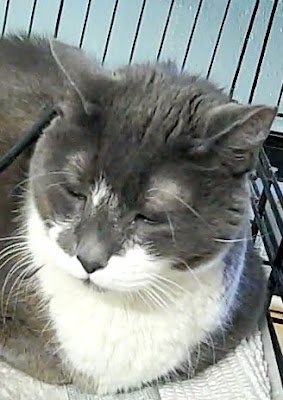 Quinn is a beautiful cat at BARC Shelter who is extremely fearful (and possibly was at least somwhat feral). I have been working with him for some months, constantly adjusting and varying the way in which I work with him in order to be able to meet him at a place where he can feel comfortable connecting.
Little by little he has been getting more comfortable, and I know that even though most people cannot make physical contact with him, the staff and volunteers at BARC do their best to help him feel at ease, even if it is simply sitting next to his cage and speaking with him.
Most recently, I found that I was able to relax myself and him by doing deep, relaxing breaths and positive visualzation, then just one gentle stroke with a wand on his back.
Yesterday I wanted to try a variation on this. The shelter was very quiet to begin with, so that was helpful to start off with. I began as I had before, doing several deep breaths, imagining stroking him with the wand and him relaxing, then doing one stroke down his back, then the deep breaths and visualization again.
I could see that he was tolerating the strokes, but his tail began to twitch, so he was not quite at ease. So I began to very slowly say to him a mantra which was taught to me as a way to center and ground myself, but I replaced the "I" with a "you". "You are very loved, and you are very safe..." I could see that the tone of my voice and the feeling of what I was saying was helping him to feel at ease.
I repeated it over and over, very slowly, and saw the tail twitching slow down, and then stop. I continued, my voice becoming softer til I was barely making a sound, mostly thinking the words. After a while I felt very in synch with his energy, and felt tears well up, feeling that something was opening up in him. I kept working through the impulse to cry, just reminding myself to continue connecting with him, continuing to feel something was releasing. I do think this cat has trauma in his past, something that causes him to be so afraid of people.
A number of times while I was doing this, I very slowly and gently stroked him with the plastic wand (just a plastic flexible stick from a string toy). Sometimes I would do a little circle and stroke. With this approach, I felt him continue to relax. I didn't push it with the contact, and after a while was just very softly saying the words, very slowly. He eventually got into sleepy mode and curled up to take a nap. I thanked him and closed the session.
Thank you Quinn, you are teaching me so much every time I work with you. Look forward to seeing you soon.... xo
Posted by sarahsuricat at 10:34 AM