TTouch and Reiki at BARC Shelter: "Less is More" with Quinn 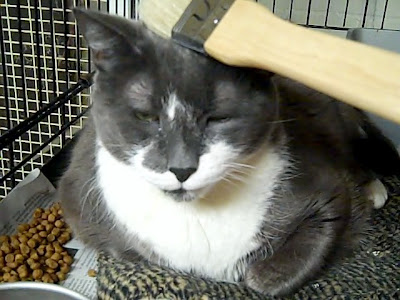 Quinn is a cat who I have recently been working with at BARC shelter in Brooklyn. He was terrified when he first came into the shelter, but working very gradually and slowly, especially using paintbrushes and other tooks, has really been helpful for him.

I feel like there is a sweet, funny cat underneath his unsureness, and I think we are starting to see that coming forth more and more.

He now will often come ambling up to the front of the cage, seeming to seek attention, but as he can get suddenly startled and swat (he generally does not use his claws though), it is less stressful for him and for the person making contact to still use a tool at this point with him.

He is a very good example of the "less is more" TTouch philosophy. When I work with him, I generally use a paintbrush. The one you see in this post is a wide one, but since these pix I have actually been using a smaller, round-shaped one or a fan brush, and both of these seem to work even better. I start out doing just a few little circles and strokes on the top of his head, then stop for a bit to give him a break. 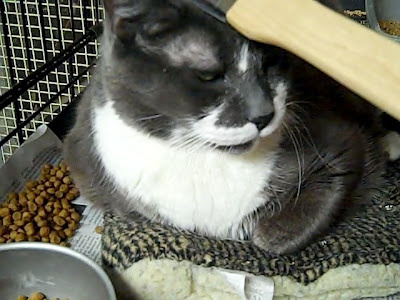 Then I start again, either continuing to do circular touches or strokes on the top of his head or starting to do some of these around the whisker area or under his chin. Then I stop again, giving him a rest. Each of these "rests" may just be a few seconds, and the touches may be for about half a minute, depending on the body language which I see from him. If he is starting to get over-stimulated, twitching his tail or seeming to get ready to swat, I stop for a longer period of time, maybe even going to another cage and coming back if he seems to have had enough for now. 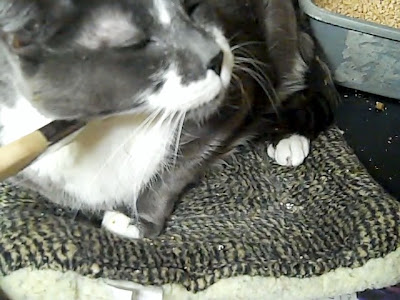 Very often, though, after a few short bursts, he starts to settle more, relaxing and closing his eyes. At the moment he is still usually a bit too sensitive to be touched on his back much, so I usually concentrate on doing TTouches around his head. 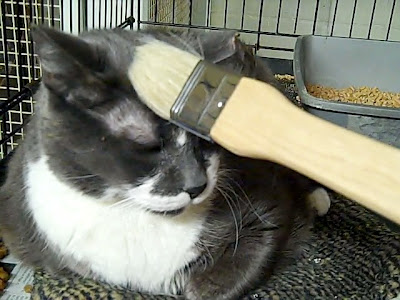 Or, if he seems to be more relaxed, I will incorporate a couple of TTouches on his body (still using the brush), then going back to his head. Or, a few times I have used the back of my fingers on his head, but only for a few seconds, and then I go back to using the brush.

Thank you Quinn, for reminding me to continue to be as patient as you need, and to always truly stay in the moment and listen to what you are ready to do.
Posted by sarahsuricat at 2:42 PM