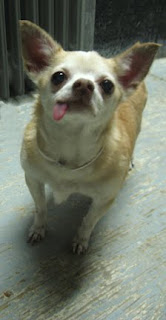 A few days ago, the lovely little Chihuahua (pictured above) arrived at Social Tees shelter. I am calling her Rosa. She is about 15 years old, and full of pep.

The poor girl arrived at the shelter extremely stressed out, and would flinch and/or lunge if you made any movement towards her. We put her in a crate overnight so that she would not be bothered by the other dogs running loose in the shelter, then decided to let her loose in the shelter the following day. I found her cringing in a corner in the kitchen area.

I crouched on the floor with my back to her several feet away from her, and began to speak softly to her, assuring her that everything was ok, that she was in a safe place, and we were going to take care of her and be kind to her, etc. Little by little she started to walk up to me and sniff me a little. Then she would walk away, circle back and come near me again, checking me out. I continued to speak to her in a quiet, soft voice, and made sure that I was breathing and that I was consciously slowing my own energy way down. She came closer to me each time, eventually brushing against my body with her body. I wasn't sure if she was ready for me to touch her, so after a while, I gave her a break and let her be, and did some other tasks around the shelter.

An hour or two later, I decided to see what could happen with her, and now she was hanging out in one of the main rooms of the shelter where many cages of cats are. The other dogs who were loose were in another room. Again, I crouched on the floor, talking to her softly, and little by little she began to come up to me again. I was a little afraid she might try to bite, so I really took my time, and when the time felt really right, I just brushed alongside her back with the back of my hand. She had no problem with this. Then I began to do llama touches down her back (circles using the back of my hand), as the back of the hand is much less threatening than the front of the hand. Again, I made sure I was slowing down my own energy a lot, hearing the thoughts in my head even playing at a slow speed. The dog stayed still as I did the llama touches, so I continued. I was not holding her - she could have walked away at any point. Eventually I worked my way up to doing chimp touches (with the back of the fingers) and later, abalone touches (making circles on the skin with the hand face-down) down her back. I could feel her body becoming more relaxed as I did this and her skin tone becoming more flexible. This all took quite a while.

By the end of my session with her, I was even able to do ear strokes and small touches around her head and the outside of her mouth a bit. Her ears were very relaxed by this point. One of the other volunteers who was sitting close to me was able to touch her very gently on her head. Then the dog came back to me for more.

After I finished, she went over to a little pillow and curled up to take a nap. Aaaahh, relaxed at last, she seemed to say.

The following day, I had to start out the same way, as when I first moved towards her, she flinched and looked frightened. So I started slowly and basically went through the same sequence, though I was able to touch her sooner this time, as she was becoming used to me. I have told others in the shelter to be very gentle with her, and that it's better to allow her time to come up to you. I can't wait to see her again and hope a kind, loving person will be able to give her a forever home soon!
Posted by sarahsuricat at 12:01 PM