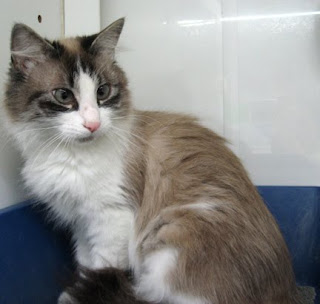 Irene is one of the lovely Mayor's Alliance cats who I am working on through Tavi & Friends' TTouch-in-Rescue Program. I have to admit I am getting so attached to this sweet little soul. I also keep wondering what her vision is like, as she is cross-eyed, and wonder if that is what causes her to have a rather shy personality.

She is really coming around though. She still will flinch a bit when you first open her cage, but she is getting more and more comfortable being touched, and this time was more at ease when I transitioned from touching her on the head to touching her on the body. 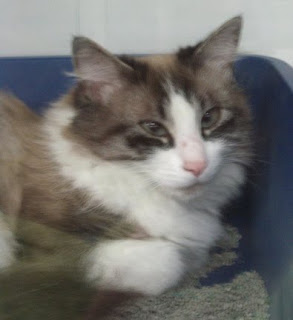 And this time, she really got to purring for me, which was so sweet to see. I did still start out with raccoon and chimp TTouches on the head and mouth area, and then began to work in llama TTouches and abalone TTouches on her body, as I thought these TTouches would be comforting to her. I worked with Irene three or four times while I was there today, giving her breaks and working on other cats in between these minisessions. Below you will see parts of an earlier minisession and a later minisession I did with her.

In this second minisession below, you will see her getting quite comfortable, kneading with her paws. At the end of the clip she has perhaps had enough and stands up, but she is purring away and so I did a little more with her on her head after she stood up.

and then, just for fun, below is a cip showing her munching away on her food, something many cats will do during or after TTouch :)

Posted by sarahsuricat at 12:20 PM