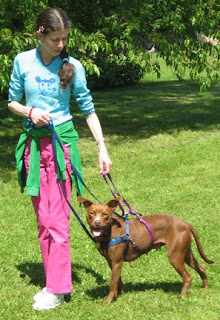 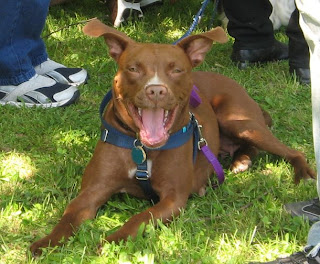 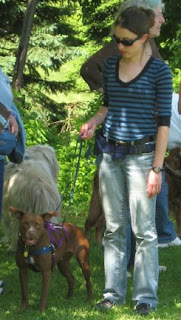 Pit Bulls can undeservedly really get a bad name, especially recently. They just need people to treat them right.
I had the absolute pleasure of working on such a sweet Pit Bull named Esme, who you see above, first with me, then giving a big smile, and then with her foster mom, Nicole (who is an animal communicator, you can find out more about her at http://nicolefitzgerald.com/). Nicole has been an awesome foster mom and has helped Esme bring out more and more of her sweet self! As you can see in the photos, she also has a darling smile and such cute ears - I love this girl! This dog is ready to find a loving forever home, and following is some information on her if you are interested in doing that.
"Meet Esme, a beautiful one year old pit mix. This lovable girl has great ears, is full of life and is ready to snuggle! She was rescued with her puppies from a shelter in Atlanta, and is looking for her forever home. She's about 37 pounds and not likely to get much bigger -- a great size and very manageable. She loves attention, children, going to the park, playing with other dogs and napping with her people. She is house-trained, crate-trained, walks well on a leash, rides well in a car, and has had some basic obedience training with her foster family. Esme is very smart and eager to please, so she will be a great family pet. Esme can't wait to meet you and show you what a great addition she'd be to your home! She's been spayed, microchipped, and is dewormed and up-to-date on her shots. Please contact Laura for an adoption application. HOTSHOT824@AOL.COM"
Posted by sarahsuricat at 2:35 PM No comments: 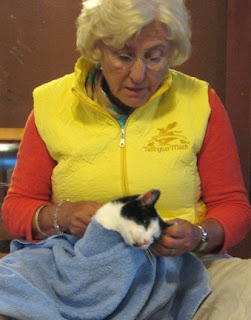 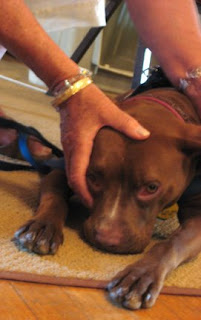 It's been a few days since I finished a TTouch training in Dayton, NJ and it is still very surreal! However, as you can see above, I do have proof that it actually happened! Here you can see Linda working on a cat (who is LOVING having her ears touched) and you can also see Linda's hands working magic on a sweet dog named Esme (more on her later). I am so grateful for this experience. By experiencing Linda doing TTouch in person, I could really feel what that special connection is like, almost as though I could feel my hands inside of her hands and have that sensation - hard to describe but so amazing. Anyone interested in TTouch should definitely take a workshop with her if you have the opportunity. Thank you so much Linda and thank you to all the animals and people in the training who were so generous and taught me so much as well.
Posted by sarahsuricat at 2:15 PM No comments: 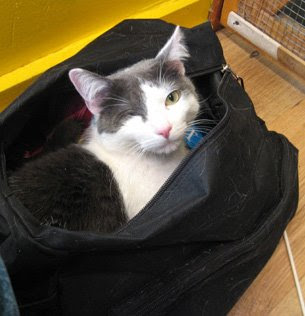 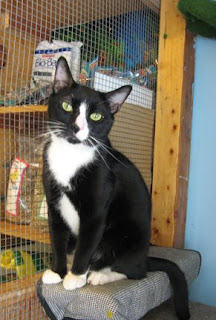 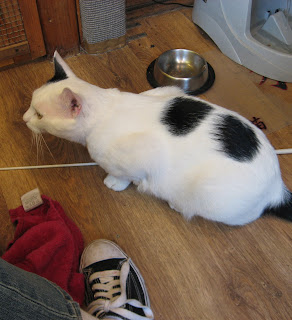 Hi everyone, what a week! Last week I took my next installment of TTouch training with Linda Tellington-Jones, wow. But I'll have to get back on that later, because I need to sort through my photos etc.
Meanwhile, today I went to work on three cats in the Rescue Ranch at Whiskers Holistic Pet Care: Wilma, the lovely cat with one missing eye but such a dear soul, and the charming duo of Lokai (Black with white boots etc) and Bele (white with black spots). All three are up for adoption at Whiskers on 9th Street between Second and Third Ave in NYC so give them a call if you are interested 1-800-WHISKERS or 212-979-2532, 1800whiskerscom.
Wilma is an extremely shy girl and did not want to be touched or approached at first. But I found that once I started doing TTouch on Lokai and Bele, she came closer and closer to me. Then she decided it was coziest for her under a towel which was in between the wall and my bag, and she let me do TTouch for a long time there. She laid down and went to sleep there, and seemed to be so relieved to be so relaxed there. I think having only the one eye makes her more fearful of the world but am grateful that I was able to help her feel more relaxed and less fearful. I think once she is reminded of that feeling she will be less shy, as I felt she deeply craves the warmth and security of contact and love. Lokai and Bele are two extremely friendly, sweet guys and are used to being together. Bele seems like the older brother and Lokai looks to Bele to see what to do next. They both loved TTouch and gave me kisses to encourage me to do more. I was happy to have the opportunity to do this and feel that a breakthrough was reached with Wilma. I truly felt that all three of these cats are dear beings and dreaming of a cozy home, so please give Whiskers a call if you can do that :)
Posted by sarahsuricat at 3:58 PM No comments: 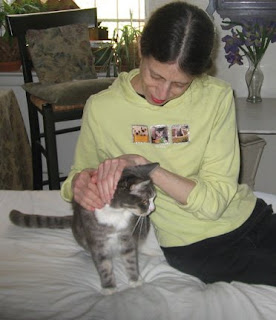 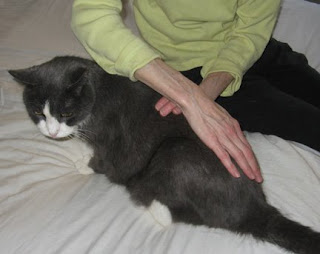 Here are Jordyn's cats, first Jinx and then Dura, both very lovely animals, as you can see. I am doing some gentle Abalone Ttouch on Jinx and Lying Leopard TTouch on Dura. Both these animals have reminded me of a key concept in TTouch when dealing with the animals, which is to "meet them where they are." Jinx takes a while to warm up to people, and so I have just worked on him in short burst, doing a few Ttouches, then coming back and trying again. Dura is an older gentleman and extremely sensitive and so needs to really be listened to. He has generally been relaxed and receptive when I worked on him in his own space, but these photos were taken at the next-door neighbors, where he was not so comfortable, so I just used the very lightest pressure and most soothing types of TTouch such as the Abalone TTouch, the Llama TTouch (doing a circle and a quarter using the back of the hand) and the Lying Leopart TTouch. I look forward to working more on both of these animals and hope to help them be more at ease with unfamiliar people and/or situations.
Posted by sarahsuricat at 12:24 PM 1 comment: 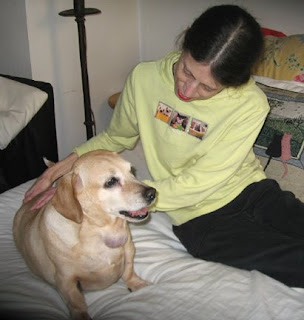 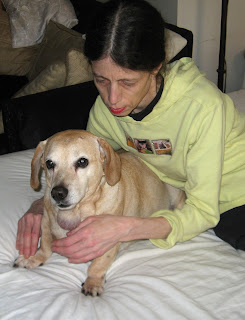 Right now I am in the midst of practitioner training for Tellington Touch or T-Touch. For more about this method and for info about classes, books, etc please visit http://www.tellingtontouch.com/, as the following just includes general descriptions. I am in the midst of doing case studies, and I have had the pleasure of working on my friend Jordyn's (http://www.myspace.com/dancingminddesign) animals, plus her next door neighbor's dog Maggie. The whole household is so sweet, and even the animals who have some health issues maintain such a positive attitude. Here are some pictures which Jordyn took, and descriptions of some of the touches used in this method.
Many of the touches in T-Touch are named after animals. On the top photo, here I am with Noodles, doing what is called the "abalone touch", a very soothing touch in which your whole hand is a unit, like an abalone shell, and you move your whole hand in a circle and a quarter. He looks like he is blissing out :) On the picture underneath that, I am doing the "raccoon touch" which is done using the tip of the index finger, on his front right foot, on his toes and in between his toes. 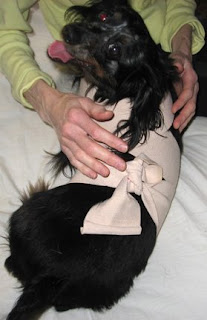 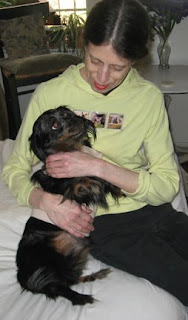 Next is Petey. Here you can see him in a simple wrap, which is done with a 3" ace bandage, which can be very calming especially to a nervous animal. Petey is not nervous, but the wrap does seem to calm his energy. FYI, something I have learned since the photo was taken is that the wrap is to be tied off to the side of the spine instead of right on the spine, so it does not put pressure there. Anyway, sometimes Petey likes to sit on his hind legs, so in the next picture you can see me stroking his ears in this position. The ears contain many acupuncture points, so working on the ears can help with a range of conditions including stress, arthritis, digestive issues, and is helpful even in EXTREMELY stressful situations such as if your animal is going into shock. Stroking the ears or doing raccoon touches on the ears and near the base of the ear is great to do if you are getting ready to take your animal to the vet.
Next, you see a picture of me working on Maggie, an Italian greyhound who lives next door to Jordyn. I put a wrap on her, as she is friendly but quite high-strung. It was easier for me to do T-Touches on her after putting the wrap on. After working on her ears, then I did some "lying leopard touches" on her body. For this touch, your hand is more flattened out and quite a lot of the finger area is in contact with the body. This is a very soothing touch which can be helpful more nervous animals. In the next post, I will describe working on Jordyn's cats. 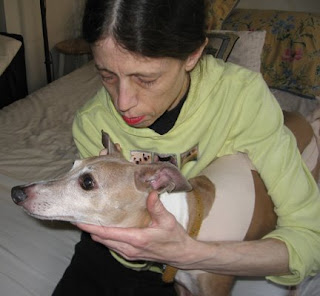 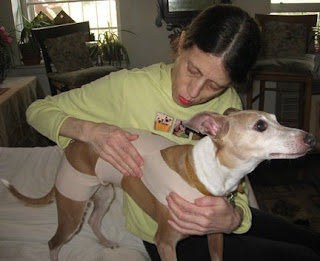