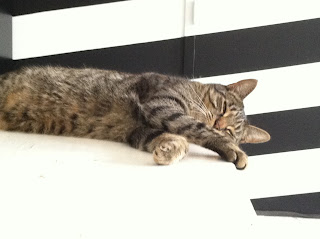 Luther is a beautiful tabby cat who I have worked with off and on for the past couple of years.  He has two adopted cat brothers, Mr. Maps and Scrumble.  They live in a wonderful home with their kind and caring people, Suzanne and Mike.

Following is a link to a post about Luther and Mr. Maps after their brother Bunny (the dear kitty who I first worked with in this household) had passed, and before Scrumble was adopted. to give more of a back story of Luther:
http://sarahsuricat.blogspot.com/2014/09/my-journey-with-luther-and-mr-maps.html

Luther is an extremely sensitive cat, and can get overstimulated easily.  When I first started working with him, this would happen more easily and he could go into attack mode.  I worked with him very gently and carefully, giving him plenty of space, and allowing him to come closer as he was comfortable.  After some months of TTouch, Reiki, Bach Flower remedies and clicker training, this behavior calmed substantially, and his people were able to be closer to him and even pick him up and hold him, which was wonderful.

But there are times when he goes back into a more stressed mode, and needs some reminding of how to be in a calmer state.  Most recently I was called to work with him because he had started peeing off the side of counters.  I came for a session, and brought a Bach Flower remedy for him as well. 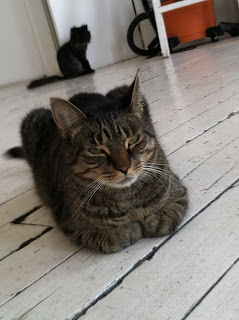 Luther
Luther is extremely receptive to Reiki.  By now he is so familiar with the energy that when I start to create the Reiki space, he feels and connects with it right away, and starts to settle.

I started our session in the bigger space of the loft, which is where we usually start with some clicker training.  I left the doors open so that all the cats could join if they wanted, and move around as they pleased.  After a bit of clicker training, I sat on the floor with all of them and let the Reiki f 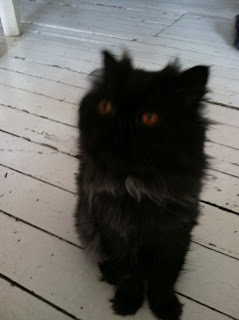 Scrumble
At this point I felt all the cats connect with the energy, calming.  Scrumble came right near me and settled down next to my feet, and Mr. Maps and Luther settled at a comfortable distance.  Since Luther is so sensitive, I sit with a sideways orientation to him, rather than straight-on, and soften my gaze.  This is actually something that I do when working with animals in general, but it is especially important with a very sensitive animal. 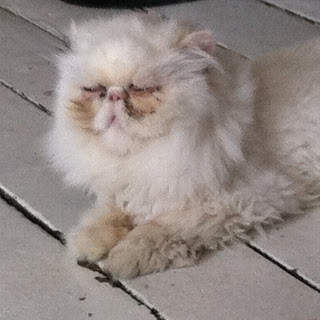 I felt a very tangible connection of my heart to Luther's, as well as a connection with the other two cats.  And I felt this deep sense of love connecting us.

Reiki can facilitate this feeling:  a timeless, universal feeling of love and connection.  I felt all four of us connected, but particularly felt the energy that connected Luther and me, our hearts connecting and the energy passing back and forth between us.  At this time I was also speaking to him in a soft, soothing, rhythmic voice, which can add another level of calmness in combination with the Reiki energy.  After a time I was quiet, still feeling the energy of a soft voice there.  Luther visibly calmed, and I had a sense of him calming internally as well.

After a time, Luther got up and moved into a smaller room which is used as a walk-in closet.  Luther started to settle there.  I waited a moment, and after sensing he wanted me to join him in there, I went in the room and settled a few feet away from him, the Reiki energy continuing to flow. 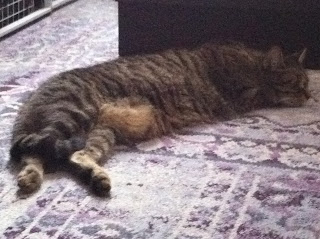 I felt him comforted by the smaller space, as well as by feeling the softness of the carpet underneath him.  There was light coming in the window, and I could feel Luther's sense that this was where he wanted to be.  Here with the energy, coziness, softness and light.  As I continued to share Reiki with him, he calmed further and further, slowly stretching out and reaching complete relaxation. 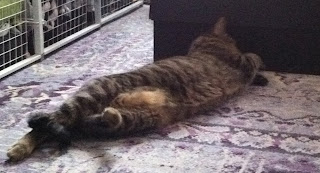 Such a beautiful feeling, his spirit and body really unwinding.  We stayed here for the rest of his session.  It was almost difficult to end the session, as I could feel him absorbing the energy so much.  I ended the session very softly, thanking him and thanking Reiki. 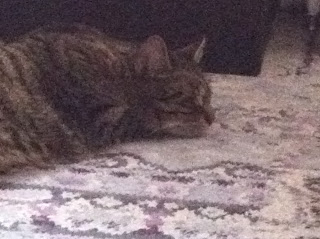 Afterwards, I told Suzanne and Mike what had happened, and suggested that it could benefit him to have a smallish, soft space, such as a crate with towels inside and draped over the top and three sides of it, so that he could have a little place to go and calm down when he needed it.  They told me that he always has access to the closet as well, so that is good too.  They have a crate, so they set this up for him, and sent me this photo of him looking very cozy indeed! 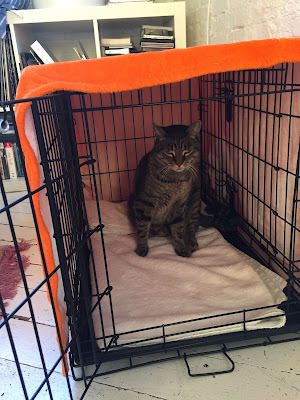 I checked in with them a few days ago, and his behavior has been good.  They said they don't often see him in his "apartment", but he seems to be glad it is there:)
With much love and gratitude, xoxo
Posted by sarahsuricat at 10:48 AM No comments:

Reiki with the Cats at Bideawee: Oneness and Eternal Love

I always love my time with animals, and have meaningful connections with them every day.  But at times there are those special moments that sneak up on you and surprise you in the most beautiful way. 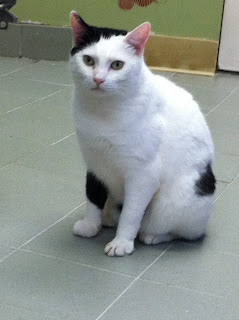 Last week, towards the end of my afternoon working with the cats at Bideawee, I decided to go into the main cat room to work with Ashanti, one of my long-time kitty friends there.  The cats in this room generally are cats who prefer to be only cats, so they reside in cages but are let out to roam freely in the room in shifts, so they all have time out.  There are two adjacent cat rooms which each house 4-5 cats, and one can see the cats in this room through the glass walls.

Ashanti was having his time out.  As it was a quiet time of day, I decided to sit on the floor in the middle of the room and offer Reiki to him. 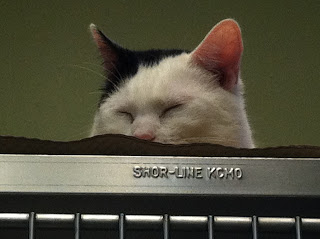 Ashanti first came up to me, looked at me, and then climbed to an upper area in the room, where he loves to be, and laid down, squinting his eyes, absorbing the energy.

As the energy began to flow, it expanded through the room and I felt it connecting with the other cats in the room as well.  The radio was playing quietly.  I felt such a peacefulness come over the room. 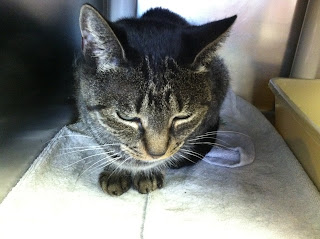 Coral
I felt the energy become stronger and stronger, and felt the connections with all the cats in the room, as well as those in the adjacent rooms.  I felt the history of my connections with these cats, some of whom I have known for a good while.  The strength and beauty of that shared history. 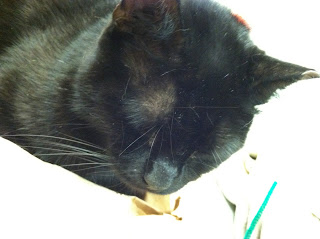 Buddy
I felt a huge energy of love filling up the room.  This feeling of an eternal kind of love, a love beyond the boundaries of time and space.  Boundless joy and infinite connection with the cats and with the universe. 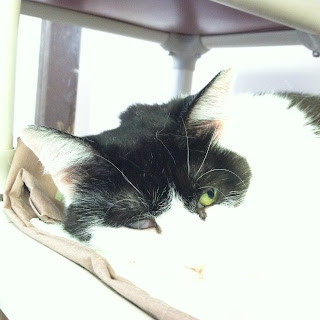 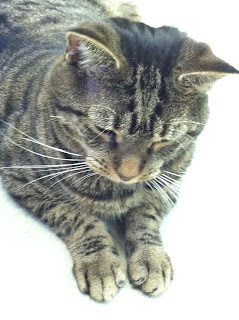 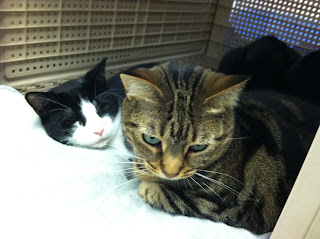 
All the cats in the room, and in the adjacent rooms, were peaceful and calm.  A few cats were eating or grooming, others were just resting peacefully. 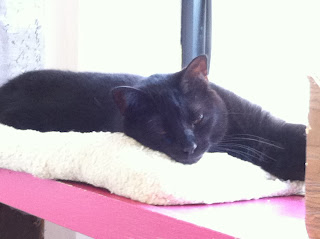 It was such a beautiful way to end my day with them. When the time was right, I slowly ended the session, thanking Reiki, and thanking the cats.  I looked around the room at all of them, and told them to have a wonderful night.  I can't wait to see them again! xxooo 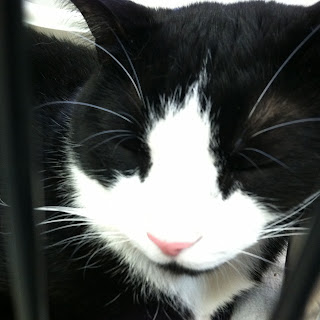