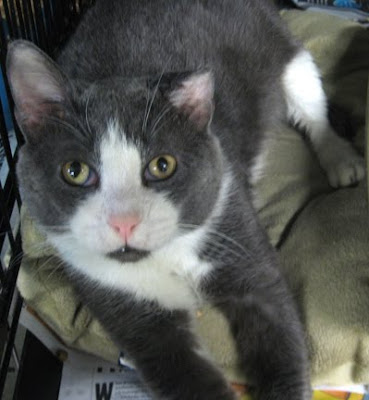 Waldorf is such an appealing cat, he reminds me of a little teddy bear. He has such a sweet, gentle energy. He arrived along with a bunch of other cats a ways back after his owner passed away.

When he first arrived, he was quite shy, staying to the back of his cage. He was never aggressive, he would just sometimes move away from you when you wanted to touch him. Little by little, he grew more comfortable being touched, and would come forward a bit as I did TTouches on him. I would still approach him with a very quiet energy though, as he could become easily startled. I also would do just a few TTouches on him at a time, then give him a break, then try again.

One day I brought in some Liv-a-Littles chicken treats, which were suggested to me a ways back by my friend from the Homeless Cat Network, Cookie. These treats can often break the ice with the shyest of cats. He went crazy for these treats and began coming to the front of his cage for the treats. I would give a treat, then do some TTouch on him, then offer him another treat. It was not long before he began to hang in the front of his cage more and more. For one thing, he was getting used to associating people approaching him with something he liked.

Then, a few days ago, he was moved from a cage on the bottom level to a cage on the top level. This move seemed to provide another level of comfort for him, as now he is constantly coming to the very front of his cage, rubbing himself against the bars and asking for attention. And, when you approach him with your hand, he will lean into it, instead of sometimes being hesitant or moving away.

In addition, ut seems he has made the cat in the cage right next to him much more comfortable as a result of his comfort level. His neighbor is a young cat who came in very terrified and now she is also coming to the front of the cage and rubbing against the bars, just like him.

Thank you Waldorf, and thank you also to the kind staff and volunteers at BARC shelter who have helped to socialize Waldorf. Here's hoping for a forever home for you very soon!
Posted by sarahsuricat at 12:18 PM