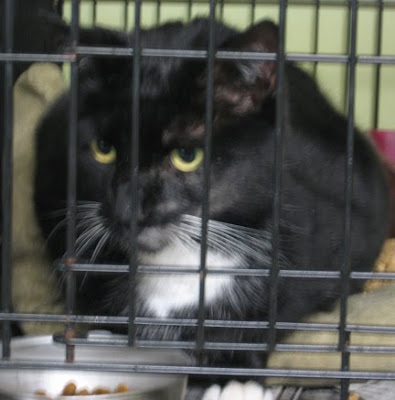 Lexington is a big, regal-looking cat who recently arrived at BARC shelter in Brooklyn. At first he seemed quite at ease, but then we realized he can get over-stimulated and suddenly get very irritated. My sense is that it is hard for him to be in the shelter, and he appears to not be comfortable around other cats. I wanted to see what I could do to calm him.

I have a pair of gloves that are a mixture of rubber and cloth - I still have a lot of mobility with them, but they do protect me from a cat who may scratch, so I have been using them with him lately, just in case. I decided to try doing some circular TTouches on him using a back scratcher that I have that is a little different in that the hand at the end of the scratcher looks more like a small hand (the fingers are spread out instead of all being straight in a line). I did the touches on him using the back of the small hand. This provides some distance between me and the cat, so that we both can feel safe. I started out with doing some small circular touches on the top of his head. Almost immediately, I felt an energy shift with him, and I felt myself calm down as I felt his energy change. He went from an irritated energy to a smooth, sleepy energy. I continued, and did some strokes with the back of the hand of the scratcher down his back, then did circles and strokes on his back with the scratcher. Over the past week, we have done several sessions in this way and it really does change his energy. I think that after a while, it will get him used to reacting to touch in this way, instead of the irritated/overstimulated response.
Thank you for trusting me, Lexington, and I look forward to working with you more!
Posted by sarahsuricat at 12:17 PM