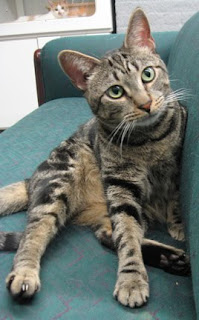 I went again to do TTouch on the Mayor's Alliance cats thru Tavi & Friends' TTouch-in-Rescue program. It turned out that Diego (above), who I thought was going to be adopted, is still there (maybe has just not been picked up yet). He was very eager for attention, which I was only too glad to give him. I feel that he has such a deep soul, you can really feel it when you look in his eyes. I took him out of his cage twice while I was there, as he kept on looking at me after I put him back the first time. He sat on the couch on my lap as though we were hanging out watching TB. He rubbed his face against me and gave me a kiss! I did very slow abalone ttouches on him, as this is the TTouch he most responds to, and I also did mouth ttouches, earstrokes, and raccoon ttouches on his head. He is such a sweet animal. 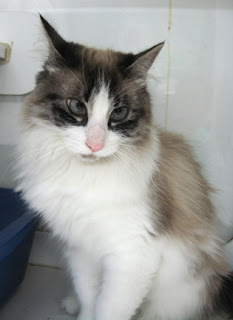 Irene (above) was meowing a lot at the front of her cage, asking for attention. When I open her cage, she started doing a little "marching", which is kind of like kneading with one paw and then the next. As she is very sensitive, I do llama ttouches on her body (circular ttouches which use the back of the hand), as the back of the hand is less invasive. I also did some raccoon ttouches on her forehead and around the outside of the mouth, which really brought her energy into a very relaxed state. I still have to be careful of moving quickly towards her. I think that because she is cross-eyed, her depth perception is a little skewed. 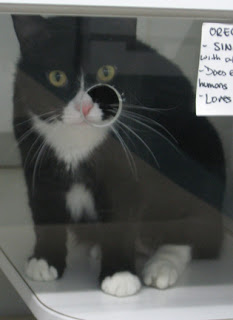 Oreo is now by himself in a cage, as his pal Smoky was adopted. It was interesting, his energy was affectionate, as always, but more relaxed than I usually have seen him. I wonder if he feels more relaxed now that he feels he doesn't have to compete w/Smoky for attention (even though Smoky was a passive type of personality). He came right up to me, putting his paws up near my shoulders, and gave me a kiss, which is a first for him. I did abalone and llama ttouches on his body, ear strokes, chimp ttouch on his body. He really responded to these and I felt his energy become quite at ease. 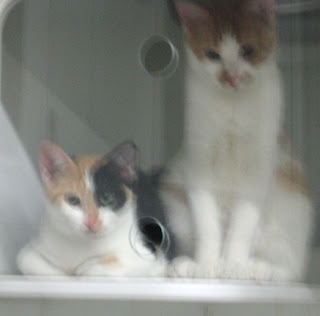 The two youngsters above (Ophelia and Rascal) are so dear, but as they are wild and playful I have to let them out one at a time so I don't have trouble getting them back in the cage :) Ophelia just wanted to run around so I just got in a few ttouches with her here and there, and with Rascal I actually ttouched him in the cage, just doing a little bit, as he was also more in the mood for playing more than anything. 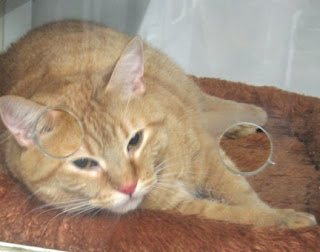 Above is a new guy, Ty. He must have just arrived, and the poor guy seemed very stressed out. I used the back scratcher to do circles and strokes on his body, but even working at a distance, he continued to growl and hiss. He also appears to be a kitty that eats when he is stressed, as he started eating his food, still growling while he was eating! I decided he needed more gentle contact, so I did Reiki on him from about a foot away, and this settled him after a while. While I was working on some of the others who are very comfortable and so I am able to work on them out of the cage, I saw him watching, looking rather forlorn. I so wanted to give this big guy a hug! Hopefully next week, after he's had some time to adjust, he will be ready to try a bit more contact. 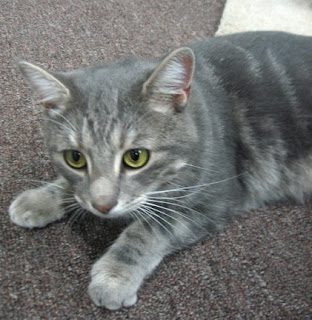 Vaska was waiting in the very front of his cage to be let out, as usual, and came bounding out. He gets so excited! he just starts walking back and forth, rubbing himself against me. After a while, his energy calms down. I usually start with touches with the back of my hand, like llama and chimp touch, and then try more specific ttouches like raccoon TTouch with hi. what a sweetie! You see him above, and with me below, with a little smile on his face.
I love these kitties and look forward to seeing them soon .... 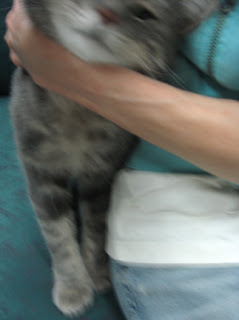