A Big White Cat, a Little White Cat, the Orange Kitten and a new gang of kittens 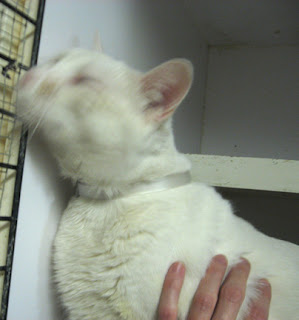 Today again I went to work on the big white cat at Social Tees, and she seems to be doing better than ever. She was laying down sleeping when I first began to approach her cage, but once I opened the cage and began to touch her, she sat up and was eager to nuzzle and cuddle and receive TTouch. I am so glad to see her feeling so much better. As she was more energized, I decided to only do a little Reiki on her today and mostly do TTouch. What a sweet cat. As you can see from the pictures here, it was hard to get her to stay still as she was in cuddly, nuzzly mode. 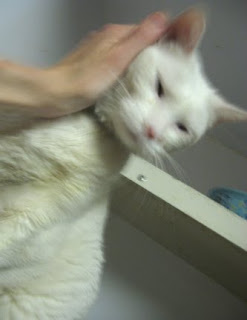 I did some ear work on her to help continue to support her immune system, as she is still a little sneezy, and some clouded leopard and abalone touches down her body. I also did some raccoon touches around her head and mouth area. 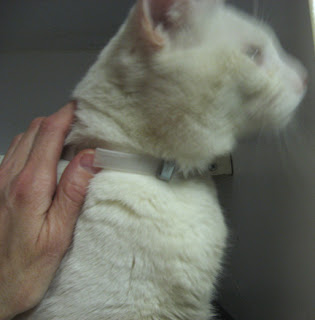 The little orange blind kitten and little white calico who are in the same cage both came to the front of the cage and I took them out one by one to do TTouch on them. The little white calico has a bit of a cold and some digestive issues so I did some ear work and later on some very gentle belly lifts on her. She also responded very strongly to work around her mouth area. Everyone working in the shelter has remarked on her dramatic behavior change from extremely scared cat to extremely friendly cat. This is a pleasure to see. And the blind orange cat continues to look more healthy, with the quality of its coat improving and its general energy level seeming stronger.
I also worked on a new young black cat who is extremely afraid and was at the back of the cage. When I initially opened the cage and approached her, she hissed and her ears flattened, so I decided to approach her first with a feather (so there was distance between my hand and her), doing little circles and strokes on her head and body. I did a number of short little spurts of TTouch with her, closing her cage and giving her breaks. Near the end of the couple of hours I was at the shelter, I was able to do TTouch on her entire body and head with my hand, which was terrific. I even heard her purring. As the other kitten in her cage was adopted, we put two kittens from another cage in with her to keep her company. I did TTouch on all three of them before leaving, and the initial hisses soon calmed down and it seemed all three would get along fine.
Posted by sarahsuricat at 11:36 PM