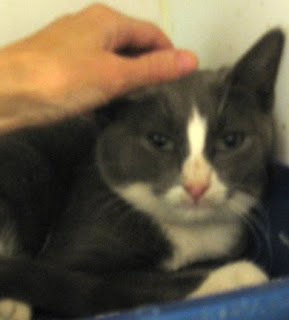 Yesterday at Social Tees I worked on the above kitten again. He had started out so scared but is REALLY coming around, it is such a pleasure to see. I am calling him Jimmy (I'll have to check later and make sure he's a HE :) ). You can see in the above picture that his ears are in a normal position, not flattened and tense. Yesterday when I first approached him, he still hissed, but again once I began to do TTouch on him, he relaxed, and yesterday I was able to do more TTouch on his body in order to get his body relaxed, which was wonderful. This time he started purring very shortly after I started touching him and he continued to purr the entire time I worked on him. I know it is going to take him a while to really trust people but he is really coming along, and it is such a pleasure to feel his body, head, ears etc relax as he was so completely rigid when I first began to work on him. Even his little face looks more relaxed and in less of a worried expression here. A big hug to this little being!

And the three formerly very frightened kittens together in one cage are really coming along as well. Yesterday I put a chair right outside their cage so I could take each one out, one at a time, and do TTouch on them while they sat in my lap. This way, they could see their friends and be very close to their cage. Even the most frightened kitten, the little black one, was ok with me doing this after an initial small growl when I took him out. The growl soon faded and he let me do TTouch all over his head and body before going back into his cage.

Thank you so much to Linda Tellington-Jones (and to all my other wonderful teachers of this work) for the gift of this powerful work.
Posted by sarahsuricat at 11:55 AM