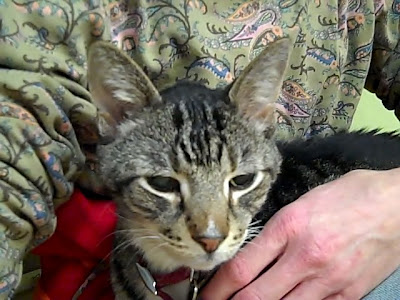 Dusty was brought into BARC Shelter some months back. He was returned after being in a home for ten years, apparently because he was urinating outside of the litter box (to my knowledge, that didn't happen in the shelter). He was given medical attention, great food and treats and an incredible amount of love and care from the BARC staff, vets and volunteers.

From the first day he was brought into the shelter, he was one of the most loving beings I have known, with a heart constantly emanating love and reaching out to share it. He was always ready to come out on a lap for cuddles, and in my case, for Reiki and TTouch as well. I felt him to be a very deep soul, and there was something that felt otherworldly as well, as though he was a sweet angel that had come to earth for a short while. As much as people gave to him, he gave back three times as much in pure love and light.

As time went on, it was clear that his health was waning, and so I began to spend even more time with him than before, feeling him absorbing the Reiki energy from my hands into his body, stretching out and letting go, feeling my being merging with his as the energy flowed.
The shelter people and vets did what they could to help him with medication, fluids, diet, etc. Though he rallied for a while, the past week or so he began to take a nose dive. Yesterday when I was at the shelter I spent a couple of hours with him on my lap, the warmth from my hands being absorbed into his body. I shared Reiki energy with him and did gentle TTouches going down his body, feeling him r-eI spoke to him softly and told him that it would be all right, that I knew he was trying to stay for the benefit of all the people who loved him, but that it was ok for him to let go. At one point he completely stretched out on my lap, laying his head down, some of his energy starting to let go. I knew he was tired, and his time was soon. 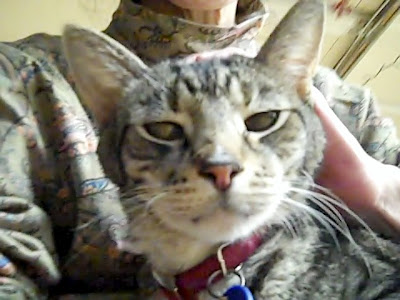 Later on that day the decision was made to let him go. Everyone was so sad, but knew it was his time, and was the right thing to do. We all said goodbye to him, and let him know he would be able to be at peace now. I pictured him with light and angels all around him, a bright, warm light. 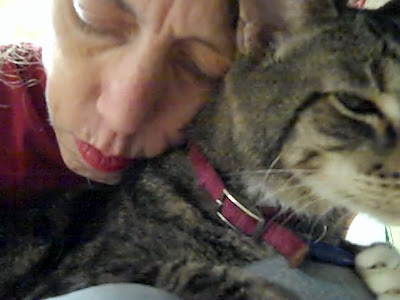 Thank you Dusty, for being the selfless, generous, beautiful being you were and are, you will live forever in my heart. And thank you to all the BARC staff, vet staff, and volunteers for giving so much love and care to him. xoxoxo
Posted by sarahsuricat at 9:27 AM