Reiki and TTouch with Doris: Session 4 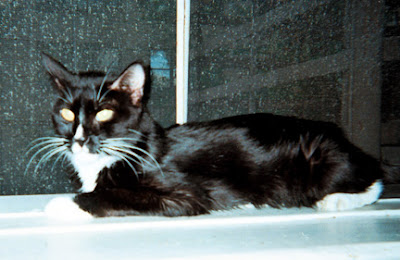 Doris is a gentle, sweet senior kitty who has diabetes and lymphosarcoma. I have been doing Reiki and some TTouch with her to help her to be as comfortable and balanced as she can be, given the situation. I have also showed Mari a lot of TTouches, which she has been doing with Doris, and she said that Doris really seems to love the TTouches and is very calmed by them.

Today when I went to work with Doris again, Mari said that Doris was feeling better after an adjustment on the insulin dosage, so that is great. She was sitting in the window, which seems to be one of her favorite spots, and she looked comfortable. I started out sitting on the bed, offering her Reiki from a foot or two away, as I have noticed that Doris generally is most receptive to Reiki from a short distance away. As always, I told her to take as much or as little Reiki as she felt was beneficial to her. I also remembered something that Margrit Coates (a wonderful healer with whom I have studied hands-on energy healing for animals), said about adjusting the volume of energy which is coming out, and I felt myself keeping that concept in my mind, as I didn't want to overwhelm Doris with too much energy coming at her, as she is so sensitive. It was a subtle thing, just a gentle influence of the way I was thinking about the energy flow.

Today I felt Doris really settle into the energy, staying in the window for the whole session, whereas in the previous sessions, she had needed to take breaks, then start again. I felt the energy coming out of my hand in soft waves, almost like a gentle breeze. I noticed that, as before, I often felt the energy drawn towards her abdomen area. This makes sense, as her digestive system has been under duress with her condition. I also felt the energy drawn at times towards some of the other chakras.

As I continued to send the energy, Doris became more and more relaxed, nodding off for a while. I did gradually move my hands closer to see what was most comfortable for her. At one point I felt she was letting me know that it was more comfortable a little bit away, as she got up, rearranged herself, then after I backed off (still continuing to send energy), she settled back down and laid her head down on her paws, looking at me.

As I started to feel the session was winding down, I did some TTouches around her forehead area, still sending Reiki at the same time, and thanked her. Shortly after this, she got up and went to eat from her bowl.

Speaking of food bowl.... Mari's other four cats often come near me, one at a time, while I am doing Reiki with Doris. Today they took turns sitting in the window to the right of the one where Doris sits, and they seemed to be taking in the relaxed Reiki energy as well. Mari sent me this photo of a "smile" they left in their food bowl after the Reiki session.

Thanks and love to you all, and look forward to seeing you soon... 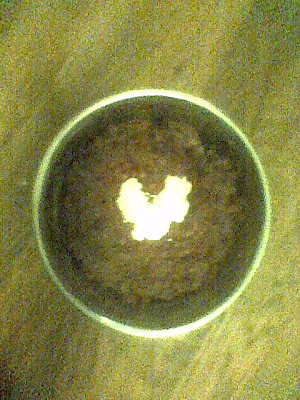 Posted by sarahsuricat at 12:50 PM