The Continued Adventures of Lulu and Natalia: Mouth TTouches and Tooth Brushing/Cleaning 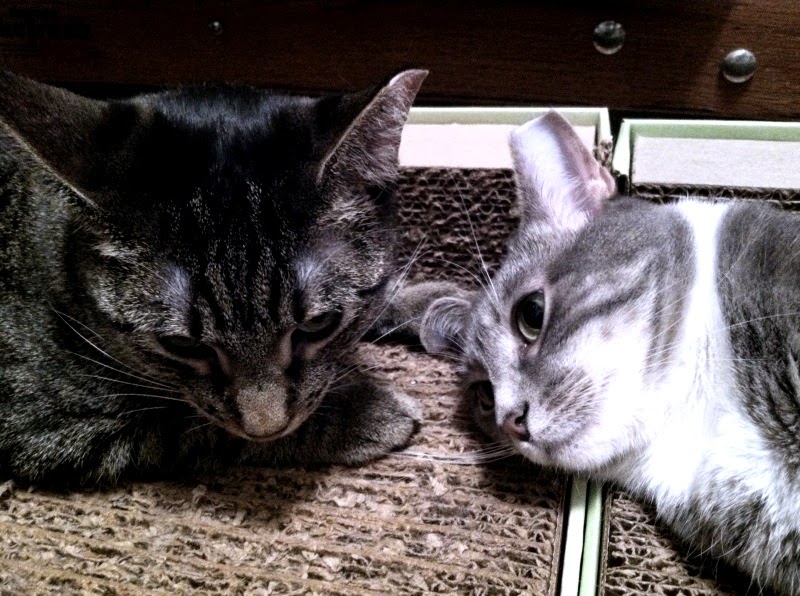 Above: Lulu and Natalia
Tellington TTouch not only has tremendous benefits for an animal physically, mentally and emotionally, it can also have wonderful practical applications.  When an animal is accustomed to having the gentle TTouches done on areas such as paws, around the mouth, or on or near the belly area, this can aid in nail clipping, tooth brushing (or wiping), or picking up the animal, respectively.

My dear cats Lulu and Natalia were brought into BARC as feral cats, and I subsequently worked with them at the shelter and eventually adopted them, going through an extended process of acclimating them to the apartment, etc, which you can see detailed in earlier blog posts if you do a search for their names on my blog (Lulu was originally named Emmylou).

I have done everything with them in small steps, and touching around their mount ha also been a gradual process.  Natalia is particularly head-shy, so I will usually do some TTouches on her body before gradually working up to TTouches on the head, though sometimes if she is relaxed to begin with, she is ok with me TTouching her there.  Lulu is less head-shy but can be hesitant to being touched when she is in certain moods, so I always watch her body language to see what is the best approach.  I may start with her by TTouching her with the back of my fingers, as that is less intense than the front of my fingers.

Lately I have been getting them used to TTouches around the outside of the mouth area, which can be so calming, as they connect with the limbic system, which has to do with emotions.  I started out with these just a little at a time, and they have gotten more and more comfortable with it.

The next step which I wanted to try was to get them used to me TTouching them inside their mouth, and wiping off their teeth a bit with some gauze. 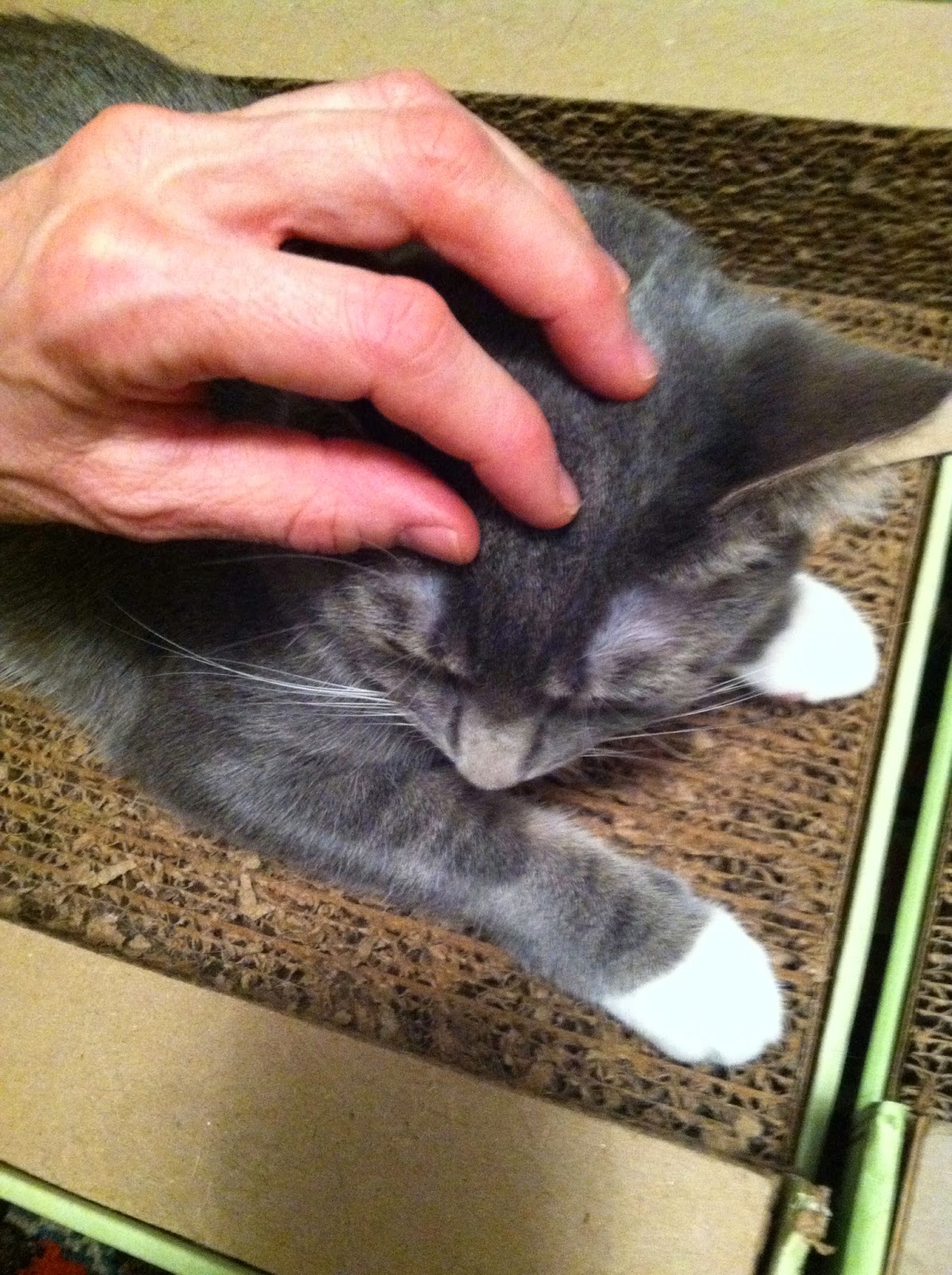 Above: Raccoon TTouches with Natalia
I started out working with Natalia. First I did some zigzag TTouches and general TTouches on her body to relax her.  Then I put the gauze around my finger, and gradually began to do Raccoon TTouches (circular TTouches with the tip of my finger) all around Natalia's head area -- the top of the head, back of the head and around the outside of the mouth.  I wanted to get her used to the feel of the gauze on my finger before attempting to go inside her mouth with it, as though this is all one cozy process.  Once working along the outside of the mouth, I did raccoon TTouches as well as a few gentle slides with my finger.  She got more comfortable as I continued working with her, so I decided to go to the next step.  Just a tiny bit at a time I slid my finger inside her mouth and along the outside of a few of her teeth.  I did this a few times, paused, and then did it again a few short times and then went back to some general TTouches.  I then gave her a break, giving her a lot of very slow, quiet praise, goooood girrrrl.  The tone of your voice can help to relax the animal as well as the general level of your own energy. Above: TTouches with Lulu, gauze on finger

Then I tried the same procedure with Lulu, and it worked like a charm with her as well.  It is really key to be sensitive to what they are ready to do in that moment.  If you try this and it feels they are not ready to go to the next step, pause and give them a break, and you may want to wait till later or even another day to try again.  The point is to have it all be part of a really comfortable process, like this is part of a relaxing TTouch session, you just happen to be putting your finger in their mouth and gently sliding over their teeth with the gauze.  The gauze was a tip recommended to me by a vet, it helps to prevent buildup and hardening of plaque.  If necessary you can dip the gauze in something that tastes good, like maybe tuna juice, but I just used it plain and my cats were fine with it.  You will have to experiment a bit! 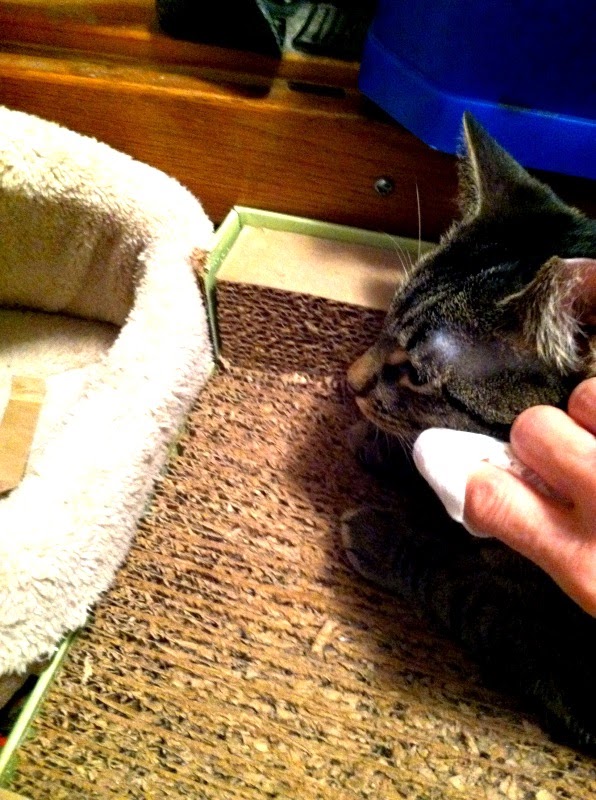 Above: TTouches and slides with Lulu along outside of mouth with gauze on finger

Bravo Lulu and Natalia! Our journey together continues to be such a moving and beautiful experience as we are continually learning from each other :)
Posted by sarahsuricat at 12:57 PM