TTouch at Bideawee: Calvin - Quiet Moments of Connection with a Shy Kitten Calvin is an adorable, charming eight month old kitty at Bideawee.  He is very playful, and one can tell that he is interested in contact.  If you sit in the room with him, he will slowly come closer.  But he is fearful of a person reaching towards him, and will generally run away.  He is not aggressive in the least - he will move away, not lash out.

I initially worked with him when he was in a cage.  I used a paintbrush, and Kerrie McKeon (one of the main keepers of the cats at Bideawee, who I initially met during TTouch training) and I both found that Calvin responded to little TTouches on his head.  He also liked treats, so that was helpful to lure him forward as well.

Soon afterwards, he was put in the kitten room, so I began to work with him in that setting.

Initially I tried playing with him with a string toy, then stroking him with the wand of the toy.  This was a little helpful but it also seemed he was a bit fearful of the wand.  I felt he wanted to be touched with something softer.  But something different than a paintbrush.

I sat quietly and did some TTouch with another kitten in the room for a few minutes, and gave Calvin a chance to settle in a safe place underneath a little platform.  He was watching me all the while.


I slowly moved towards him, and held out a soft little toy towards him.  He rubbed his face against it, so I stroked the side of his face with it, and did some circular TTouches there as well.  I then paused, to see what would happen next. 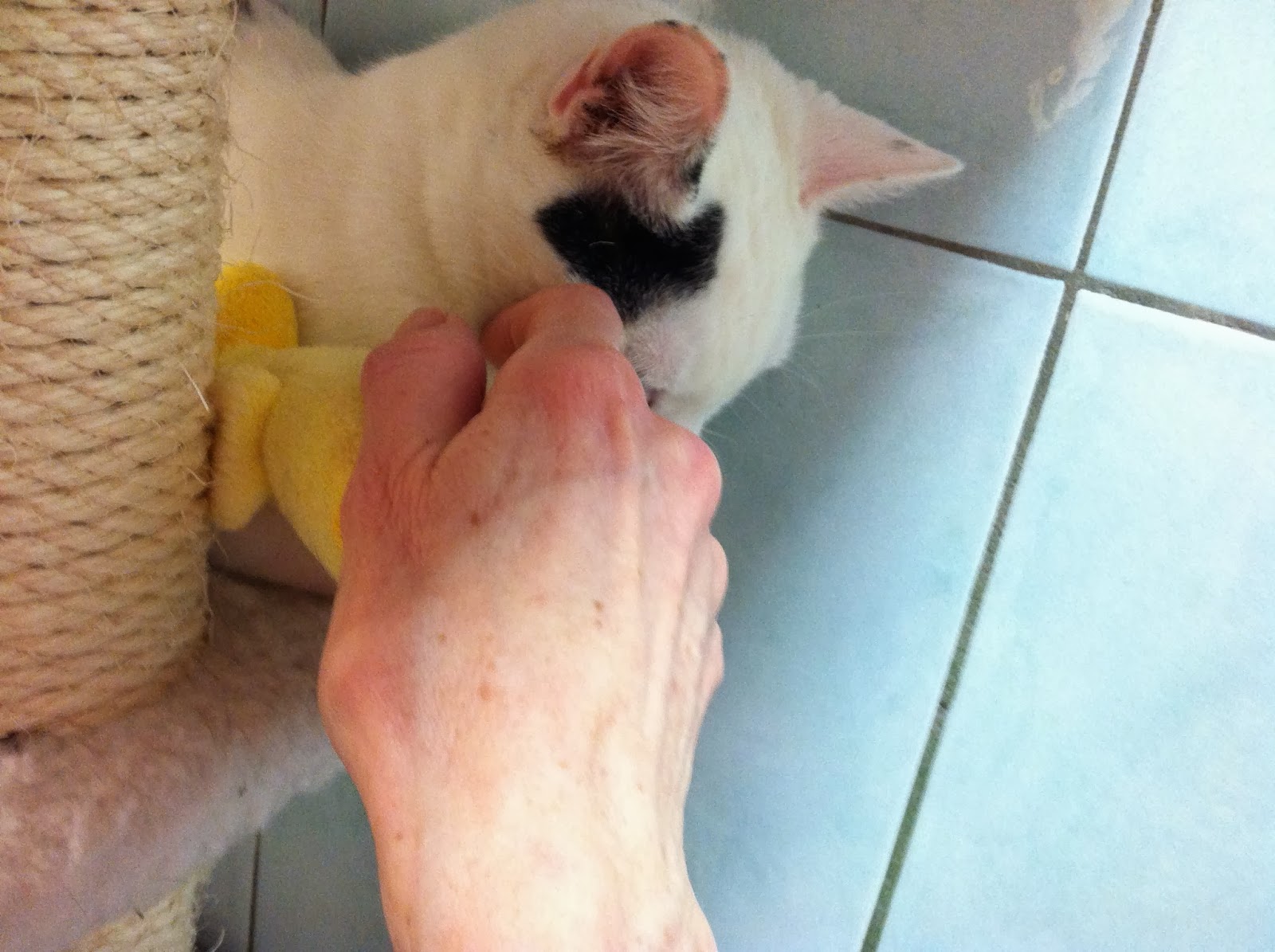 His body language told me he was a bit more comfortable.  He was blinking at me, and lying in a more comfortable position.  I repeated what I had done, and this time, after doing TTouches with the toy, I used the back of my finger to do a few of the circular TTouches and strokes along the outside of his mouth. I could feel him lean into it a bit.  I did this a very short time, as I didn't want him to get suddenly scared.

So after giving him a few minutes, he moved to another place in the room where he seemed to feel safe, again a bit underneath something, but not hidden.  I repeated what I had done before, very quietly speaking to him, and again, he began to very gently push into my hand.

The next time I worked with him, we did this same process again, and he is getting more comfortable with it.  I know that this may sound like a very small step, but it is a very big step for him, and I think it is so important to work in these increments so that at any given point the animal continues to feel safe, instead of being overwhelmed and scared.  And progress will actually be quicker if the animal is not pushed too much so that it continues to get scared.

Each time I work with him, I give him a chance to get into a comfortable position, and then quietly approach him there.  And I make sure to pause frequently, either sitting quietly with him or playing with one of the other kittens to give him a break.

Over time, with this gradual process, the animal learns that it can trust, and that it will be treated gently, and listened to. And one of the next delightful steps is that the animal then begins to approach you, seeking connection.

Look forward to seeing you soon, Calvin! xo
Posted by sarahsuricat at 10:33 AM