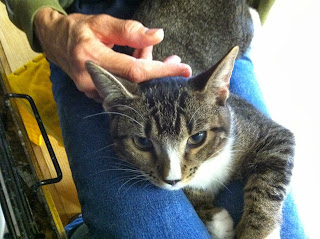 Above:  Sarah Hauser with Sarah Hauser the kitten!
Some weeks ago, a terrified little kitten was dumped at the vet's office next door to BARC Shelter.  The vet techs thought I would be able to help her to feel more at ease, and so I had the great honor of the kitten being named after me!!
I could ﻿see right away that she was not aggressive in the least, just afraid.  In the beginning, she would cling to the cage if you tried to pick her up.  A gentle approach can take a while to take effect, but I have found that in the end, it results in an animal who is truly comfortable from the inside, not simply tolerating you touching it or picking it up because you have decided you are going to force them to let you do it.
After a while of TTouch with her in the cage, I was able to pick her up and have her sit on my lap for a moment.  I didn't force her to stay there, just gently contained her for a few TTouches, then if she wanted to go back in the cage, that was fine.  After a while of doing this, she started to be more comfortable on my lap, even purring there sometimes.
A while after Sarah arrived, another single scaredy kitten arrived at the shelter and was named Aladdin.  He was put in with her, and they became the best of friends, but the two were still hanging at the back of the cage.  They both had similar behavior in that neither one was aggressive in the least, simply scared.  They would run to the back of the cage when people opened the door.  Even though both of them grew comfortable with me, they would still usually do this as an initial reaction.
A great tool for teaching scaredy kittens and cats that being touched can be pleasurable is to use baby food (all meat baby food with no onions, such as Gerber's or Beech Nut, I usually use Turkey in Turkey Gravy).  You can start out by putting some in a spoon or something else with a handle, so they can lick it off from a distance at first.  Then slowly you lure them to the front of the cage.  Eventually you can have them lick it off of a finger.  I tried this just a couple of times with both of them and it ended up making a HUGE difference.
After two sessions of using the baby food and doing some TTouches with Sarah and Aladdin, I opened the cage and Sarah started rubbing her face against my finger, really pushing into it.  This was new! I went with the feeling of it and started to bring my finger towards the front of the cage little by little.  She followed me as I did this.  She and I started making a game of this each time I worked with her.  I would still pick her up at some point to lay down on my lap as well, doing TTouches and Reiki with her.  Aladdin was not doing this little game, but he was becoming more and more comfortable being TTouched in or out of the cage and being picked up to lay on my lap, and was purring and relaxed once he got there as I did TTouches and Reiki with him, instead of running right back in his cage.
Below is a video of Sarah doing her little game with me :)
Last Saturday, I opened the cage to start to do the little game with Sarah, and she came out on my lap all by herself.  It was so spontaneous and natural, it really brought a smile to my face.  It actually looked as though she was smiling too.  She settled for quite a long time once she got on my lap.  And then when she got off my lap, she started making a little game of coming back onto my lap, staying there for a few minutes, then going back in the cage, then coming right back out again.  So sweet to see this lovely creature actually seeking contact, instead of running away from it!
Aladdin is doing really great too.  Now when I pick him up, he doesn't struggle at all, just relaxes into my hands and then settles right onto my lap, purring.
So glad to see these two cats doing so well now, they are really ready to go home - an adopter would still have to be very patient and give them the time they need, but they have come a looong way!  xoxo

Posted by sarahsuricat at 4:02 PM