Peaceful Moments with Deuce: Easing Arthritis through TTouch and Reiki 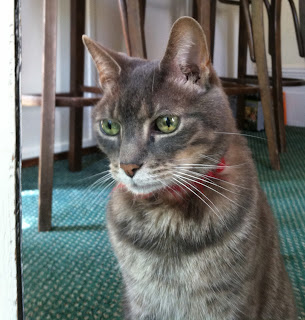 Deuce is a stunning senior cat who I have been working with for a couple of months.  His person, Alice, volunteers at BARC Shelter (where I volunteer) and she had told me he has arthritis.

I have been working with him primarily with Reiki, but with TTouches mixed into our session.  Alice has told me that before we started working together, Deuce had stopped a lot of the activities that he generally enjoyed, but that now he is much more interested in being up and about, which is great!

Deuce is a friendly, affectionate cat, and was certainly game for giving TTouch and Reiki a try pretty much right off the bat.

Most often, we will start out by doing some TTouches, and as we do this, he gets comfortable and will decide where he wants to settle.  Then I transition into a Reiki session with him.  After the Reiki session, sometimes I will do some TTouches with him as well.  That is not to say that I would treat every animal with arthritis in this way, but this is the way of working that feels right for him at this time.  Each animal is different, and I feel that what will most benefit an animal as far as treatment can shift and change over time.

Something so beautiful that can happen in the course of repeated Reiki sessions, that I am feeling with Deuce, is a deepening connection with him.  I nearly always feel this type of progression with repeated sessions of Reiki.  I feel that he absorbs the Reiki energy at a deeper level each time that I work with him.  It feels that the deepening level of trust allows the energy to permeate him at a deeper level each time.

The other thing that I have been incorporating into our sessions at times is the concept of color therapy.  I have been studying this lately, and so sometimes I will send the energy of a color to an animal while I am working with them.

The first time I did this with Deuce was an especially interesting experience.  While on the subway on the way to an appointment, I always start sending Reiki to the animal I will be working with.  This time I also began to send the essence of the color turquoise.  This color is a mixture of green and blue, which are both very cool, healing colors, and turquoise has to do with restoration and dissipating pain, so it felt like a very appropriate color to ease his arthritis.

I always feel an intention to offer Reiki to an animal for the highest good, but sometimes on top of that I will have a more specific intention.  In Deuce's case, it is to help ease his arthritis.  Sometimes I will feel my hands guided to certain parts of his body, but most often with him, as with many animals, he will shift himself until my hands are where he wants them to be.  Sometimes the hand positions will shift several times during an appointment, other times I may stay just about all the time in one position.  Reiki energy will go where it is needed, regardless of hand position :)

A little side note, there is another kitty in the house, a shy, sweet boy named Gruff.  Quite often, he will come to me for a few TTouches, or settle somewhere near where I am working with Deuce to pick up some of the energy.  Below is Gruff, on one of his favorite chairs, in an inquisitive mood. 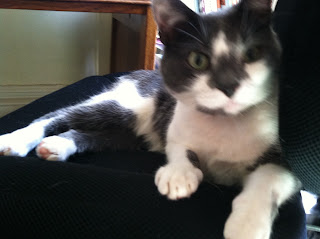 Below is Deuce in one of his favorite spots, where he settled for our most recent session.  I was feeling the pinkish-red of the chair enveloping him with such a warm, loving feeling during the session.  Like he was sinking into that very soft feeling.  He went completely into what we call a Reiki nap, which feels like a rather daydreamy type of state.  He is giving a rather funny expression here, though, as it was right after the session.  I had felt him really go down into a very deep place of relaxation, and I think he wanted to get back to napping!

Thank you Deuce! I look forward to seeing you soon! xo 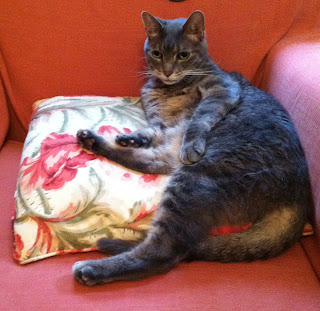 Posted by sarahsuricat at 1:39 PM