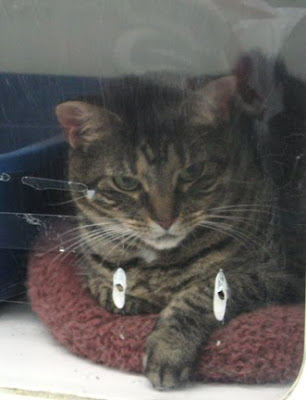 Today there weren't too many cats at the boarding facility when I went to work with the Mayor's Alliance cats through Tavi & Friends' TTouch-in-Rescue program, so I was able to spend a little more time with each cat, which is always a pleasure.

Brie is a very playful cat who is not usually too receptive to a lot of touch. She would generally rather play than cuddle when she has a chance to get out of her cage for a while. I usually let her out and take the cue from her as to what she is in the mood for. If I sit near her and wait for her to come to me, she usually comes up and starts to rub her head against me. When she did this, I did a few slow raccoon TTouches on her forehead, which she found to be calming. With her, I just do a very little bit of TTouch, give her a break, then a little more, as she can get easily over-stimulated.

The other thing I did with her this time was to offer her Reiki from a short distance away. She was very responsive to this, and I saw her eyes close and relax. This was really a pleasure to see. 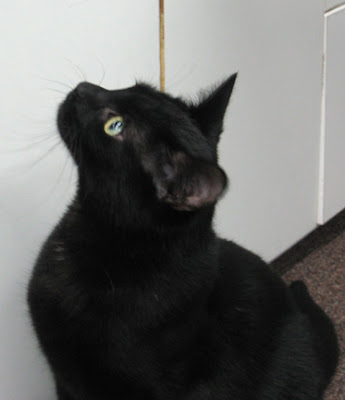 Kobie is an extremely playful and friendly cat. He was a bit standoffish when I first met him a few weeks ago, and still sometimes will initially move away if I move towards him too quickly, but now once I touch him he is very receptive, purring, licking, nuzzling against me. I did clouded leopard TTouches and abalone TTouches at a slow speed, and then some gentle ear strokes. After working with him a bit, I felt his energy become more relaxed and focused, and he laid on his side purring as I did this. 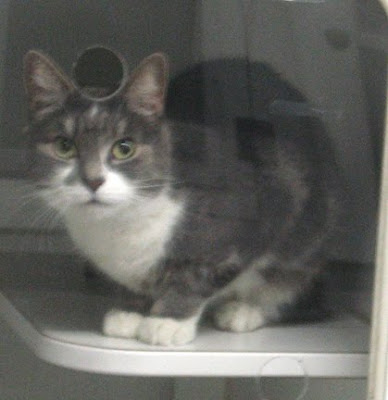 Mack is extremely sweet. He waits at the front of the cage to be let out, then will come up next to me, walking back and forth, rubbing against me. I did connected clouded leopard TTouches and abalone TTouches down either side of his back, then some ear strokes. After that I offered him Reiki, focusing on his base chakra (energy center), which is right around the base of the tail. Reiki helped to calm his energy a great deal. I will have to try this again with him. 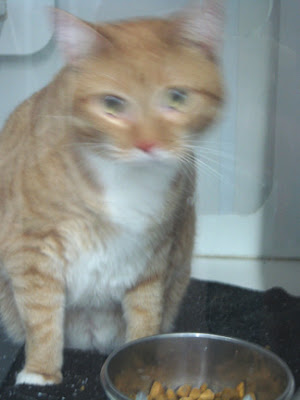 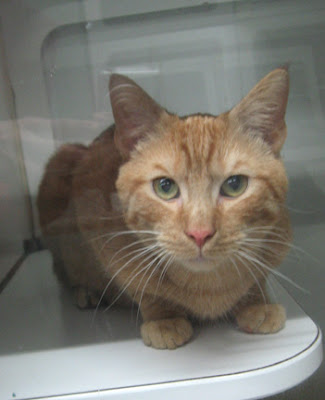 Tango is quite sweet. His walking has been a bit awkward since the beginning. Apparently it is thought to possibly be a neurological issue. He can get around fine, but doesn't use his legs quite properly. He swings his hips from side to side and the legs come along, they don't bend and flex completely.
I did connected clouded leopard TTouches all down his back and his legs in order to increase awareness from front to back. Then I decided to try a TTouch body wrap with him. We generally use ace bandages for the body wraps, but for cats and smaller animals, sometimes we use other stretchy, narrower things. Today I used a 2 inch bandage. If you are going to attempt to do this on a cat, please do it in small steps, which I did with this cat, even though he is a friendly cat. If it is too much for the cat to handle even in small steps, back off and try some of the TTouches instead.
To help get Tango used to the wrap, I just placed it across his back (folded up so it was about 6 inches long folded up) a few times, letting him get used to the sensation. Another option would be to offer a treat to the cat using the wrap as a dinner plate. Then I put it partially on him, took it off, and repeated this a few times. Finally I put it all the way on (see picture below). This is a half-wrap. It goes across the chest, crosses over the back, crosses over the stomach, then ties off to the side of the spine (so as not to put pressure on the spine). It hugs the body gently, it is not meant to be tight. The purpose is to be calming, to increase body awareness, to bring a frightened animal back into its body.

Tango's first reaction to the wrap seemed to be a bit of a surprised reaction, like this was something really new. You can see the look on the photo below, that seems to say "What am I supposed to do now?". He got up, took a few steps, then decided to stretch out on his side, where I did some TTouch on him. He repeated this a few times, seeming to be a bit confused by the new sensation, walking a few steps, then stretching out on his side. I then took the wrap off of him. It is best to just leave a wrap on a cat a short time, just enough to give them a different sensation, so that you take it off of them before they try to take it off themselves and get hung up in it. Never leave a wrap on a cat or any other animal unattended.
When he started walking again without the wrap, I did notice just a little more focus and attention to what he was doing when he was walking, which was interesting to see.
A bit later I tried to see if I could put the wrap on again, but he had enough for the day so I didn't push it. It is always good to remember with TTouch that most often, less is more....
Following is a link to a demonstration of how to do the half-wrap. Please note that leaving a wrap on a dog for 15 minutes is ok, but on a cat, a couple of minutes or less is good, especially for the first time. I would not leave it on a cat for 15 minutes.
http://www.youtube.com/sarahsuricat#p/u/22/N83oXBZy0KM
A thank you to all these beautiful cats, and I look forward to seeing them soon. 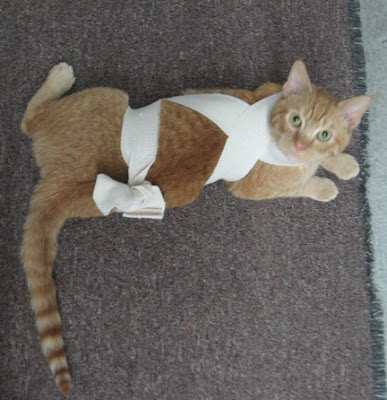 Posted by sarahsuricat at 5:49 PM