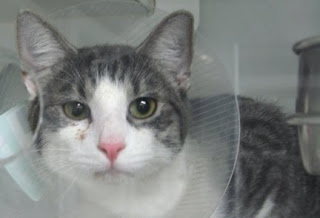 When I entered the boarding facility where I work on the Mayor's Alliance cats through Tavi & Friends' TTouch in Rescue program, there were a lot of new cats today, and most of them had the little plastic cones on them as you see above, as they had just recently been neutered. Most of these new kitties also seemed to be traumatized and wondering where they were. With these new cats I wanted to be extremely gentle in handling them due to their recent surgery, and also wanted to be as calming a presence as possible. So I primarily offered Reiki to these new cats, one by one, also doing some very light abalone TTouches on them, gently holding them and reassuring them that they were now in a safe place where they will be taken care of. They all responded quite well to this, and I could feel their energy shift. The television had been left on a high volume in the room and so I lowered the volume til the voices sounded like they were speaking very softly, and this helped the room to feel more calm as well.

I also did ear strokes on the cats who felt like this was ok to do this with. Most of the cats relaxed right into my hands. Above is Annie (apparently a boy), and below is Charles. Charles started out with a lone hiss, and looked as though he just didn't feel good, with a grumpy, "I feel lousy" expression, but shortly after I began Reiki with him, he really stretched out and relaxed his body into my hands, purring. It was such a pleasure to hear and feel him release some of his stress. I spoke softly to each cat, reassuring them and telling them that they were safe, and that they would be taken care of. 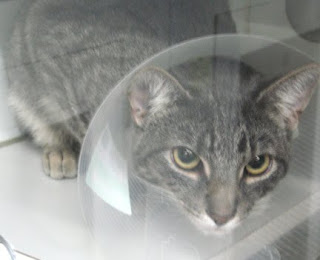 Below is Johnny. He was quite ready for attention from the very beginning and began to purr right away. But I did feel I wanted to be gentle in handling him anyway, and felt the Reiki energy flow into his body as he soaked it up, purring. I did some light zigzag TTouches and abalone ttouches on him. There were also a few other new ones who I don't have pics of - Philip, Stephanie and Max. 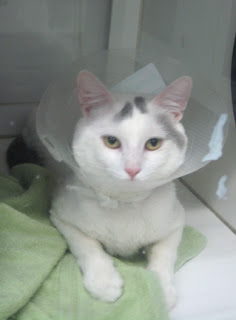 The only new kitty who was having more trouble is Pattie (below, also a boy). The poor guy was still so traumatized that I could feel him intermittently shaking, even though I could tell his body was calmer than it had been when I initially began to touch him. I asked the people at the facility to make sure there wasn't something else going on with him that I was unaware of, but apparently he was just frightened. I did Reiki and some gentle clouded leopard touches and abalone touches, and after a while he did begin to relax his body more and the shaking began to subside. His cone had been removed, probably to help him more easily relax. 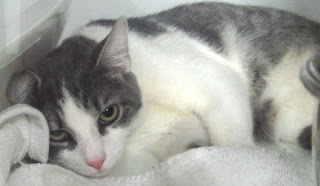 Cheeks (below) was ready for attention as usual, vocalizing to let me know and make sure I didn't forget him. I did ear strokes, zigzag TTouches and clouded leopard touches on his body. He really responded to these and put his front paws on my shoulders, bringing his face to my face for a kiss. 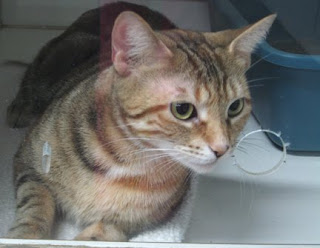 Tiger also had reappeared, perhaps she had simply been in a foster home. She is a sweet, relaxed cat. I let her out of her cage to let her stretch her legs and then she settled down for some ear strokes and abalone TTouches. She seems to really enjoy the warmth and soothingness of the big abalone TTouches. I did them very slowly on her, but with a firmer pressure than I used on the new cats. I used an extremely light touch when I did abalone ttouches on the new, frightened cats.
Serena you will read about in a seperate post, where you will see a video of me working with her.
Sending good thoughts to all these cats as I write this, especially to the more frightened ones. I look forward to seeing them next week.
Posted by sarahsuricat at 11:58 AM